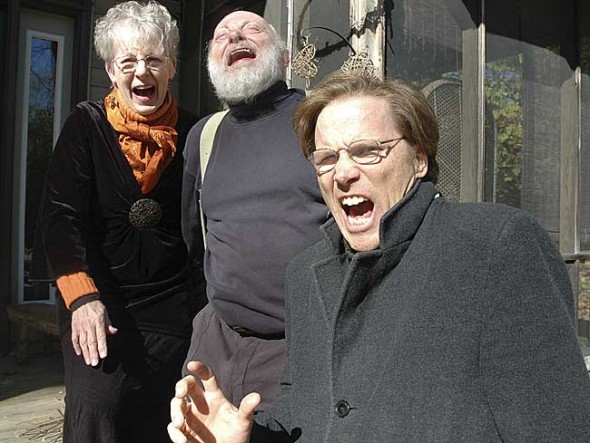 After six years telling ghost stories for children during Halloween season, the Yellow Springs Tale Spinners — from left, Jonatha Wright, Harold Wright and Eric Wolf — will tell scary tales for adults only this Sunday, Oct. 31, at 10 p.m. at the Clifton Opera House. The group will also tell ghost stories for children this Friday and Saturday, Oct. 29 and 30, at 7:30 p.m. at the Spooky Barn at Young’s Jersey Dairy. Not shown is troupe member Lisa Holmes. (photo by Diane Chiddister)

On Halloween, boo to you, too

Have you heard about the ghost cows in the village, and the long-dead owner who some people still hear calling his herd? Or about the retired steamboat captain who built a home the shape of his ship, with a bell that allegedly can still be heard on foggy nights?

The ghost stories told by the Yellow Springs Tale Spinners on Halloween night may or may not include stories of local origin, such as the above. For the first time, the local group is offering an adults-only storytelling event on Sunday, Oct. 31, at 10 p.m. at the Clifton Opera House. The cost of the event is $7.

“If older teenagers or adults want to feel chills down their spine, they should join us,” said storyteller Eric Wolf in a recent interview.

The storytelling troupe — Wolf, Jonatha and Harold Wright and Lisa Holmes — will also this weekend continue its program of Halloween stories for children, which takes place 7:30–10 p.m., Friday, Oct. 29, and Saturday, Oct. 30, at the Spooky Barn at Young’s Jersey Dairy.

Scary stories have a bad reputation, according to Wolf, who said many people assume such stories are either filled with “hokiness or horror,” neither of which is accurate. While television and film have equated violence and bloodshed with Halloween, the local storytellers do not. Rather, they choose tales that are unsettling and that delve into life’s mysteries.

“A lot of us have had things happen that we can’t explain in a logical way, and when we hear a story we wonder if it’s true,” Harold Wright said. “Ghost stories always leave me with a sense of wonder and curiosity.”

In Japanese culture, when scary stories are told, candles gradually go out, so that the audience hears the last story in complete darkness, according to Wright, a longtime Antioch College professor of Japanese language. While fire regulations will prevent the group from using candles on Halloween night, “we might play around with the light bulbs” to help create atmosphere, he said.

Ghost stories come from a variety of sources, the storytellers said, including traditional tales, historical accounts and their own imaginations. Only one criterion is essential for a ghost story, or any sort of story that the tellers perform, according to Jonatha Wright.

“We have to tell stories that we personally like,” she said.

No art form is more ancient than storytelling, which for most of recorded history was how one generation transferred information to the next. Even in this age of constant electronic media, humans love hearing stories, the group members believe, because it means interacting with another human being.

And the storytellers love their art for the very same reason: they can see into the eyes of their listeners, tell how closely they’re paying attention, whether they are moved or frightened. That immediate feedback helps them know how to improve the stories they tell, according to Wolf, who said that after six years of presenting Halloween tales, the tellers “got good at it. It used to be that some in the audience would leave at the break. Now they don’t leave,” he said.

The local storytellers came by their art through different paths, with Wolf remembering telling stories to an enthusiastic little sister when he was a child. Growing up, Harold Wright loved hearing the stories told by his mother and other family members.

“I was the shy kid behind the rocker listening to the old folks,” he said.

The group met up several years ago, and have been performing together for eight years. The original group included Shane Dickey, who has since moved away, but they are delighted to have gained Holmes.

On Halloween night, each story teller will come in costume, prepared to tell a favorite story. And while they may fool around with the light bulbs a bit, they know that the audience doesn’t need special effects.

“The great thing about storytelling is that there’s no budget,” Wolf said. “It all happens inside people’s brains.”