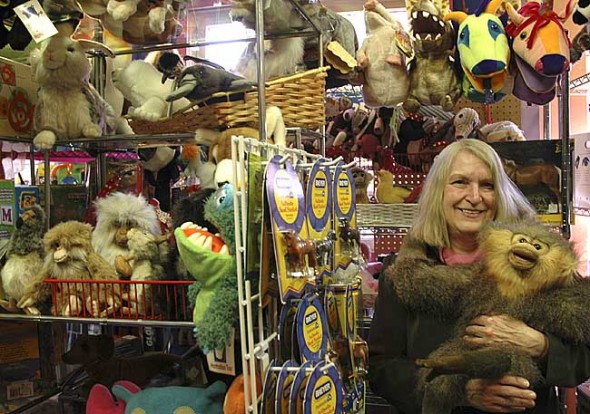 A Solar Rover, made from a recycled soda can and powered by the sun, allows children 8 and up to not only create a fun vehicle, but learn about green-energy use.

A Perplexus, a three-dimensional maze game, helps kids 6 and up develop dexterity skills and eye-hand coordination by providing barriers to overcome.

And a Bake & Decorate Cupcake set, for ages 3 and up, offers four delectable-looking wooden cupcakes that can be decorated with dry erase markers over and over again.

These are just a few of the new toys for sale on Saturday, Nov. 13, from 11 a.m. to 5 p.m. at local toy store Mr. Fub’s Party, and at toy stores around the country. New toys will be introduced that day to celebrate Neighborhood Toy Store Day, sponsored by the American Specialty Toy Retailing Association, or ASTRA.

The featured toys were selected last summer at the annual convention of the group’s 500 members, who meet yearly to talk about the toy industry and be introduced to the newest products, according to Mr. Fub’s owner and ASTRA charter member Priscilla Moore.

In the village, Moore has operated her own neighborhood toy store for more than 30 years. The store’s longevity can be partly explained by her constant quest for the best toys, Moore believes, a quest she pursues twice each year with visits to the ASTRA convention and to Manhattan’s Toy Fair each February.

“I’ve always been very aware of the industry,” Moore said, stating that her knowledge of what’s new and creative in the toy world helps to compensate for having a store in such a small town. “Everything in here is hand-picked.”

A visitor to the tiny space on Xenia Avenue finds a wealth of goodies, including kits to make almost any child-friendly item, such as finger puppets, medieval castles, tie dye or hemp bracelets. Tiny future firemen can not only find the truck of their dreams, but can make it themselves. And among the almost 4,000 items in the store are some old-fashioned favorites such as jacks, sock monkeys and doctor role-play sets.

Along with thousands of toys for kids, Mr. Fub’s has many options for silly adult gifts as well, including action figures of a cat lady and band-aids in the shape of bacon.

“We’re not just for little kids,” Moore said. “We try to bring joy and laughter to everyone.”

While some toy store owners make it a practice to follow the hottest trend, Moore does not. Rather, she said, she looks for the toy that she finds most interesting.

“I tend to make a trend rather than choose something that’s already happened,” she said.

A lifelong artist, Moore seeks toys that encourage creativity and critical thinking, and she takes pride in believing that toy stores play a role in helping children grow into successful adults.

Moore’s taste in toys seems to be working. In recent years, a City Paper poll that asked readers to identify the best area toy store had Mr. Fub’s coming in second behind Toys R Us, and ahead of third-place winner WalMart.

“It’s the little toy store that could,” she said.

Her success has led to several offers to relocate into larger spaces, such as The Greene in Kettering. But Moore has no interest in leaving the tiny storefront that has housed her business since the beginning.

“I like the small space. I think it’s charming,” she said. “And it meets the needs of little kids. They can look at toys on their own.” Her displays are designed to put items for the youngest children on the lowest shelves, to promote accessibility.

“We try to work one-on-one with our customers as much as we can,” she said, stating that if customers tell store staff the age of the child they’re buying for, the staff will offer suggestions and guidance. And if she doesn’t carry the toy desired, Moore is happy to suggest stores that might, she said.

The toy industry has been hit with huge challenges in recent years, with a combination of the recession and toy safety issues. But most ASTRA member stores are doing well, Moore said, due to their focus on specialty toys, and their smaller and more personal size. The group is also unusual in that it brings together many aspects of the toy business, including manufacturers and retailers, who are working together to promote the industry.

“There’s nothing big box about them,” Moore said of the ASTRA member stores, which tend to be smaller owner-operated stores located in neighborhoods rather than shopping malls.

The Neighborhood Toy Store Day is an example of the group’s collaborative effort. The event aims to help consumers become more aware of the smaller, specialty shops, she said, “to help the stores become more familir to their areas.”

The event is also a reminder to shoppers of the importance of shopping local, she said.

A native of Michigan, Moore was pursuing a career as an artist when she came to Yellow Springs in 1971 to visit friends who lived in a communal house started by a group of Dayton Arts Institute graduates. She continued her travels but found herself drawn to return to the village when she was ready to settle down.

“Yellow Springs is the only place I’ve become homesick for,” Moore said. “There’s something about it, a special feeling of community.”

She and a friend opened up the store when her friend, who had a small boy (whose nickname was Fubsy), couldn’t find toys that she liked for her child.

Beginning her fourth decade in a business that she never expected to be in, Moore will probably continue to get offers to locate her business elsewhere. But she has no intention of leaving the small town that has become her home, and says she’ll keep working until she can no longer get up the steps to her store.

“It’s been a fun industry to be in,” she said. “And being in Yellow Springs has been a pleasure.”