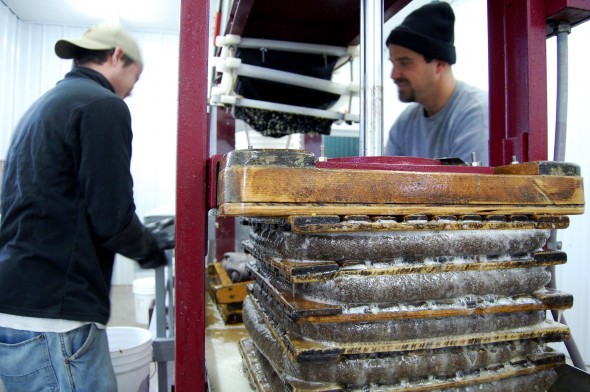 Don’t let the industrial-esque machinery in the photo fool you; the process of making apple cider is quite simple. In fact, there is essentially only one step: crush the apples. Simple does not always mean easy, though. You need to know what you’re doing, and Peifer Orchards certainly knows their way around the cider business. September through December is cider season, and during a good harvest, Peifers can make up to three hundred gallons of cider per week.

It all begins on roughly five acres of orchard trees that produce about fifteen different varieties of apples throughout the season: Goldrush, McIntosh and Jonathan to name a few. The workers pick the apples and store them in numerous coolers. The coolers are purposely without nitrogen-induced preservation. The workers load the apples onto the conveyer, which sends them through a shredder. The resulting apple pulp forms a sort of pancake. The workers wrap the pulp pancakes in cloth, and then repeat the process until they form a high stack. Then a presser squeezes every last delicious drop of liquid through a strainer and into a holding tank.

And that’s it, honestly. The next step is: you drink it. It sounds very odd, in our era of processed food, that there is no middle step. Peifers does not pasteurize its cider. It doesn’t color it. It doesn’t do anything but squeeze the apples. And you drink it. The Industrial Revolution hatched many clever schemes for mechanizing food production, but at Peifers, two workers pressing twice a week can produce about five thousand gallons of apple cider in a season.

Peifers’ business is almost all local, and it sells produce to local restaurants such as the Winds and Current Cuisine. If you’d like to sample some of their autumn flavors, the store is open Monday through Friday from 10 am to 6 pm, Saturday from 10 am to 5 pm and Sunday from noon to 5 pm. Get on Route 68/Xenia Ave and drive just north of town.

One Response to “Peifer Orchards lets the Autumn flavors flow”