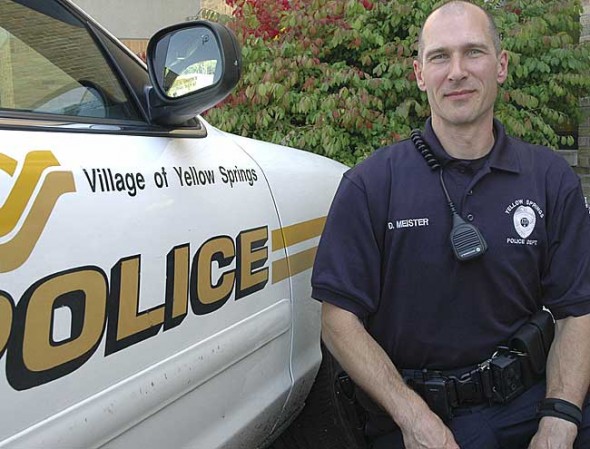 David Meister joined the Yellow Springs Police Department late last year and is now committing to the force as a full-time officer. (photo by Lauren Heaton)

That two officers have committed to the force is welcome news for the YSPD, which has been challenged this year to meet the needs of a small department with 24-hour dispatch service, according to Police Chief John Grote. In late June, full-time officer Tim Knoth took a medical leave of absence and has not returned. In September the department concluded a three-month internal evaluation of the conduct of full-time officer Shannon Huntsman, who was terminated in October for violating internal procedures. Also within the past year, part-time officer Matt Hoying left to join the Butler Township department, and part-time officer Kelly Andrus left to start a new job in Columbus.

So Grote was relieved to find a new officer who is familiar with small towns to join the flagging force. Meister joins full-time Sergeants Dennis Nipper and Tom Jones, officers Pat Roegner and Naomi Penrod, and Greene County ACE Task Force officer Rich Miller (who works at the Task Force office in Xenia), in addition to part-time officers Andrew Pierce and Doug Andrus.

Meister spent a decade as a fish and wildlife biologist with the Department of Natural Resources near Seattle, where he also served as a part-time police officer for the city of Arlington, population 15,000. He mostly served as a reserve officer, helping to manage public events, and his aim was to become a game warden, where he could police the woods.

But just as the state was cutting its environmental budget, Meister and his wife, Zo Van Eaton-Meister, were thinking it would be nice for their three children to grow up closer to family, especially Zo’s mom, Marilyn Van Eaton, who lives in Yellow Springs. So they uprooted to resettle in the town where Zo grew up and graduated high school in the 1980s.

Arlington is a suburb of Seattle known for a relatively high rate of drug-related crime, and Meister’s department of 26 full-time officers operated aggressively, he said. By contrast, in a small department like Yellow Springs, officers do everything from patroling to writing the reports and following up on their own investigations, which Meister said he finds satisfying.

The state law enforcement regulations are also different in Ohio, and Meister has had to repeat some police academy training to receive Ohio certification as an officer. Arrests in Ohio, for instance, require a higher level of procedure, including witnesses and a judge’s signature, and search or seizure of property or people in Ohio requires a warrant.

“Washington is easier on arrests and more liberal on seizures. Any felony results in arrest, without witnesses, and no courts are involved,” he said. “There’s quite a bit of difference in law enforcement, and I’ve had to relearn and unlearn some things.”

But Meister knows small towns. He was raised on a farm outside Poulsbo, Wa., population 6,000. And he likes the softer approach the Yellow Springs department applies in the community. Working with the Yellow Springs Police Department was actually a long-shot goal, Meister said, because he never thought he would find a position. But in relatively short order, he got his “dream job.”

“The community policing model is great…people want a high quality of life here, so there’s a willingness to step forward and point out things that are wrong,” he said. “I wanted to work for an ethical, moral department, and I’ve found it.”

Grote has successfully worked with other officers who came from bigger departments and learned to apply the “softer approach” in the village, he said. Meister is a very thorough officer, Grote said, and will be a much needed addition to the local force, which weathered a rocky summer.

Hunstman, the officer who was terminated, lives in Beavercreek. He joined the YSPD as a part-time officer in 2005 and became full time in 2007. He was put on leave in June while the department gathered information about his conduct, Grote said.

Knoth, who lives in Springboro, joined the department in 1999, and was involved in two serious incidents in December 2007, when he shot and killed a dog, and the following month, when he shot and injured a local resident. In both incidents, Knoth was found to have followed proper police procedure.

Andrew Gault, who grew up in Yellow Springs, joined the department in 2009 as a part-time officer. He has been filling in by working full-time hours since the summer, Grote said.