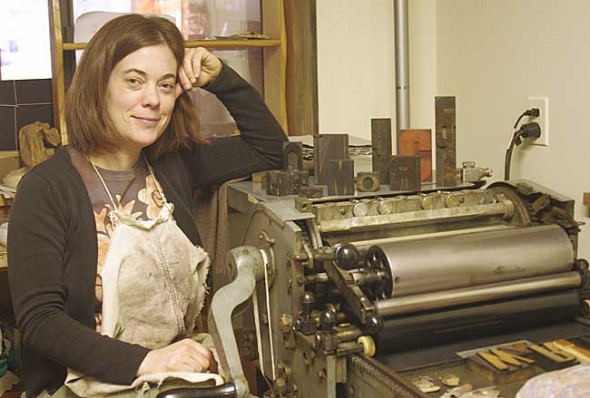 Artist Sarah Strong is shown with the letterpress in her village studio.

A Strong passion for the letterpress

The letterpress in Sarah Strong’s studio, a sleek machine with levers and rollers fitted into a corner along the western wall, stands out. It looks like it could easily be found in a more industrial setting, and may not immediately suggest “art” to the layperson who is more accustomed to paintbrushes and pencils. The machine’s potential for creative expression becomes obvious, though, when you see the pieces which Strong creates with it. They range from fun and lighthearted to intensely serious, but all are full of spirit and none could be called mechanical.

Strong didn’t have to develop an affinity for print; growing up, she “always liked letters, books,” and any and all printed material, she said in a recent interview. She described the feeling she got from hitting a key on her grandfather’s typewriter and the metal letter going thwack against the page. “I watched that happen…it was just so exciting,” she said. “I particularly loved the impression it made.”

Her mother kept a small selection of movable type, “one letter for each kid.”

As a grown-up, Strong attended the Herron School of Art in Indianapolis.

“My first class in letterpress changed my life,” she said. “Once I printed my first letter…it was just that moment, I was just incredibly excited about it…I knew I’d found my thing.”

She graduated with a degree in printmaking in 2008 and moved to Yellow Springs the same year.

Strong works in multiple media, but “book, paper and print” is “pretty much the world I’m in professionally as an artist,” she said. Letterpress, papermaking, and book arts are her “serious work.” She combines her skills as a printmaker, painter and writer to create a variety of works, from postcards to installation art. A 2009 show at the Glen Helen building featured prints and “nature sculptures.”

After moving to Yellow Springs she opened the StrongheArt Press and Studio at 143 East Limestone Street. StrongheArt is and will remain “a private press,” Strong said. Not marketing it commercially gives her the option to alternate between different projects, and “I really just like to keep it interesting,” said Strong, who also noted that she is “a mom first and foremost” and this affects how she structures her time. “I have to wait before my children are [grown] to be a starving artist,” she said.

Strong’s letterpress can print both text, and images from monotypes and woodblocks.

“It’s very versatile because it’s a flat-bed press…it can print in at least six different ways,” she said. To print text documents, she sets pieces of movable type in a frame. “Every single space is filled up with metal,” she said. She checks the frame in a mirror or runs a “blind print” before making the final edition to make sure the letters have the right orientation, since metal type is set backwards and reversed from the final image.

From the invention of the Gutenberg press circa 1440 until the late 19th century, letterpress ruled the printing world. While nobody in the 21st century is obligated to print from movable type, for Strong, “there’s no other way to do it.” She takes joy in every aspect of the process: “the copper, the wood” used in printing; “the smallness and the puzzle-like aspect of lead type”; the “design aspect”; and “the surprise which comes in the printing and the ink.” Rather than aiming to create an “exact repeatable pictorial statement,” she wants to “experiment.”

“I want to discover what I can between the ink and the paper,” she said.

Some of Strong’s work is letterpress from start to finish, such as the wedding invitations and birthday cards she has printed, and a series of Yellow Springs-themed postcards just recently completed (they will be for sale at the Chamber of Commerce). She enjoys collaborating with others on print projects and has held several “letterpress parties,” at which a group has gathered to collaboratively design a document.

“We’ll think of a theme and print it,” she said.

The Cincinnati Book Arts Society used the press to design a broadsheet, which featured all different sizes of print running in different directions on the page. Strong hopes to hold more letterpress parties this coming year with “people who want to do something special, for a wedding, for a birthday…or who just want to have fun with letters.”

While using her press for smaller projects, Strong is also engaged in creating more elaborate, lasting works of art. She said she strives to create pieces that “respond to life.”

“I’m always dealing with personal issues that affect all people: death, sickness, disease, relationships…it starts as a personal thing and I respond to it or present it in a way that everyone can relate to it.”

Much of her art from the last few years has been in response to the death of her father, who passed away in December 2007. A veteran who served in Laos in 1967, Strong’s father unknowingly contracted a parasite which lives only in Indochina. The tissue in which it lived eventually turned cancerous; they did not discover the infection “until it was too late,” said Strong. She saw her father’s death as a microcosm of the unnecessary pain and loss caused by armed conflict. “I thought, well, if I am dealing with this as a result of war, think of all the other things people are suffering from as a result of war,” she said.

As a “kind of tribute” to her father, she created an installation piece, “The Existence of Us.” In this work, scrolls hang from a ceiling, evoking Strong and her father’s lives together in paintings, print and writing inscribed on the waxed sheets of paper, sewn end-to-end. As the viewer observes the scrolls, a music box, which had been a gift from her father, plays a slow, haunting tune. “The Existence of Us” won Best in Show last summer at the Harrison Center for the Arts in Indianapolis.

“That was exciting…it was just really neat,” said Strong, who had prepared the work for several months.

She used her award money to collaborate with the Combat Paper Project, or CPP, a peace organization which recycles soldiers’ uniforms into paper on which they can write their stories. She and the CPP created a batch of pulp that incorporated a pair of children’s camouflage pants and a handkerchief of her father’s. Some of it is being incorporated into a series which shows the impact of war on individuals, using a series of sheets of paper with colored strata. A dove which is white in the first frame, appears flying through different layers of color. He gradually turns red: “Now he is mostly war,” said Strong. It’s a subset of a “peace bird” series that also grew out of her father’s passing. In 2008 she made hundreds of paper doves by screening pulp through a specially shaped frame called a deckle and had high school students in Indianapolis write messages on them; she then arranged the doves into branches, and carried the “tree” in a 2008 Indianapolis anti-war march. She wrote her father’s name on the bird at the very top.

“I’ve been making my doves everywhere I can,” she said, including locally, with students at Mills Lawn Elementary. A longtime mentor of children and youth, Strong currently works with young people at the Clark County Juvenile Detention Center and participated in Springfield’s Project Jericho, in which artists lead creative projects with at-risk youth. Strong held a mother-daughter journal-making workshop; group members “spent a week writing, visually and verbally responding to their situation,” Strong said. “It was amazing.”

Project Jericho has received a grant to continue its work in 2011.

Strong continues to focus on her dove series, but also has some other projects in the works. She plans to hold a series of workshops in papermaking, printing and drawing, beginning in January. Anyone interested in the classes — or in Strong heArt Press and Studio’s other offerings, such as letterpress parties — can reach Strong at 317-525-1785, or through its listing in the red book.

Sehvilla Mann is a freelance writer for the News.