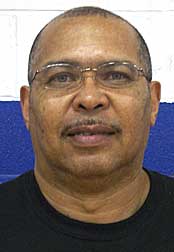 “I love Yellow Springs,” Coach Brady said in an interview last week. “The people are warm and smart, and I love the village atmosphere.”

Brady began coaching when he was a senior at Xenia High School. Due to the large number of students trying out for the basketball team, and so few positions to be filled, many students, himself included, were not able to play on the team. So Brady took matters into his own hands. He went to the local YMCA, spoke to the athletic director and formed a league for all the boys who couldn’t play for the high school. Brady played as well as coached that season, all while working two jobs and attending high school. And his team went on to win the league championship, which is what he said inspired him to continue coaching.

“Just winning that championship gave me the fire to keep coaching, and I couldn’t stop.”

Since then Brady has coached at Thurgood Marshall, Yellow Springs and Xenia. He coached the YSHS junior varsity girls basketball team from 1994–98, and then took over the varsity position in 1999. He then returned to Xenia to be closer to his family, but tried to position himself so that he could come back to coach the YSHS girls again if the position ever re-opened. After retiring from the Greene County Highway Department, Brady became the McKinney seventh-grade boys coach and was then selected out of five applicants to take over the head coaching position for the YSHS girls team.

Coach Brady is very hopeful for his new team and has high expectations for their season. He has a very talented team, he said, with both height and speed on their side.

“Once they learn my offense and defense and learn situation basketball, we’ll be playing a lot faster than we are now,” he said.

Brady’s goals for this season are to get to double-digit wins, and of course, to win the championship. But more importantly, Coach Brady wants his players to become better students. Currently five members of the team have made honor roll, and he’d like for all of them to make honor roll by the end of the season.

“I want them to be students first and athletes second,” he said.

It is obvious to anyone who attends a girls basketball game that Coach Brady is dedicated to his team on and off the court. From explaining various plays to the team during time-outs and halftime, to encouraging the girls, to interacting with and getting to know the parents after the game, Brady wants to make this a successful and enjoyable season for the girls.

“I love my team.” Brady said. “I watched them when I was the seventh-grade coach, so I know them and I know what they can do, and I have high expectations for them.”