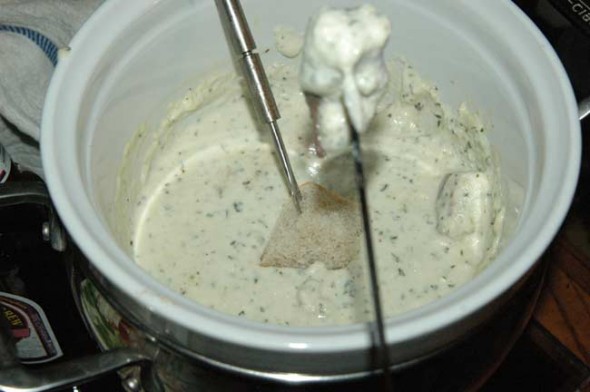 Why is it that fondue always appears on American tables around the holidays? It started out as a popular party food in the 1960s, and perhaps it continued to be served on special occasions ever after. It’s good for a small, intimate group of four to six people who don’t mind climbing over each other to reach the offerings, and it makes for a diversion for people who like to, well, play with their food.

There are of course many different kinds of fondue, which is essentially French for “melted.” There is the broth fondue in which marinated meat is dunked in boiling broth for several minutes. There’s hot oil, melted chocolate, etc. It’s all fun and tasty. But the most important reason I think fondue has maintained a cheerful presence in the American culinary tradition is that the only food in the world that is more delicious than cheese, is melted cheese.

Here is an easy recipe for a goat and sheep’s milk fondue that I found in a little booklet published in Munich in the 1990s from the chefs Marlisa Szwillus and Reiner Schmidtz.

Saute on medium-low heat the onion and garlic in 1 T olive oil and add 1 C broth, herbs and lemon juice and bring to boil. Slowly add Manchego, stirring constantly in a figure eight pattern, until melted. Add feta in same manner. Blend with hand mixer or in a blender until smooth.

Serve with chunks of bread and sauteed zucchini, eggplant and peppers. 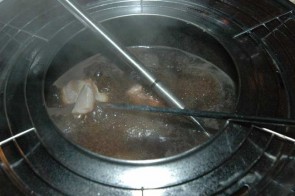 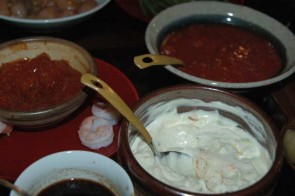