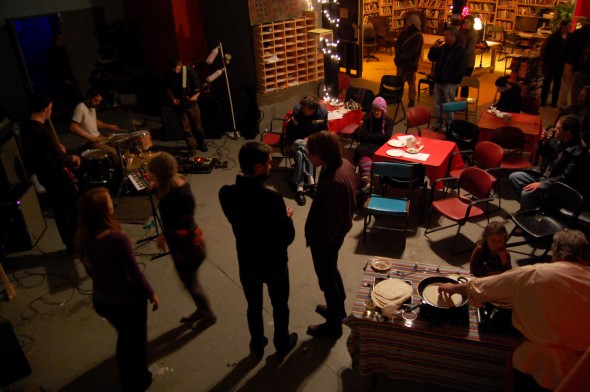 It seems that the spirit of Antioch tends to reincarnate in interesting ways around town. When the college closed in 2008, a small group of students and faculty formed the Nonstop Institution, a program for the encouragement of cultural, artistic and educational pursuits in Yellow Springs.

These members, such as Jill Becker and Louise Smith, contributed their talents to a Nonstop fundraiser gala last night to raise money for the general upkeep of the program. The night’s events were quite diverse. Becker performed a dance number called “Indictment”, which paid homage to the women of Iraq who have endured two wars in two decades. There were numerous other artistic acts, and even a cooking demonstration by Michael Casselli and Raul Enriquez with the help of Skype. (If I am permitted to break from journalistic formality here, the burritos were simply incredible).

The Nonstop building hosts an assortment of guests, in addition to the members. The group has hosted numerous artists in residence, and rents out the space for rehearsals to the local band Kuan (a few members of the band performed at the gala). You can visit the organization’s website at http://nonstopinstitute.org to get more information and upcoming events.