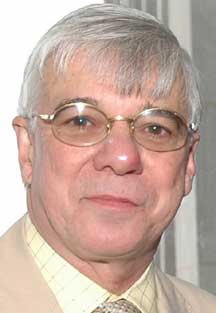 Ron Napal is the new interim director of advancement for Antioch College.

Along with incoming president Mark Roosevelt, who began his tenure January 1, Antioch College recently announced three other new leaders at the revived college.

Ron Napal, a 1966 Antioch College graduate with a long history of fundraising and public relations experience, last week began his position as interim director of advancement. He will continue in this position until June, as the college seeks a permanent leader of the advancement office. In an interview this week, Napal said he is not a candidate for the permanent position.

Retired last year after 20 years with United Cerebral Palsy of New York City, Napal came back to work because “I’m committed to the success of the newly independent Antioch,” he said.

Napal feels commited to his alma mater, he said, because “Antioch transformed my life,” when he was a young man. “It trained me to be an entrepreneur before I knew the word, trained me to be flexible, a problem solver.”

After graduation, Napal went on to found his first business, an arts management firm, at the age of 27. After that, he founded a second company, a niche marketing and public relations firm. Later Napal went on to serve as vice-president and chief development officer for the Crohn’s and Colitis Foundation of America, where in four years he oversaw growth in revenues from $17.5 million to $34 million annually, followed by his work with the United Cerebral Palsy organization, where he served in a variety of positions, including chief development officer, director for corporate development and special advisor to the CEO and board of directors.

In his new position as interim director of advancement at Antioch College, Napal will oversee a staff of 10 employees who are engaged in fundraising and alumni relations. His specific goal is to assure that the general fundraising campaign, with a goal of $2.2 million, is concluded successfully by the end of the fiscal year in June, along with working on the ongoing capital campaign goal of raising $50 million in five years. So far, the college has raised $22 million, he said.

Born and raised in New York City, Napal will continue his residency there, but plans to be on campus three days a week when not on fundraising trips.

Raised in a traditional middle-class home, Napal retained the values he was raised with when he came to Antioch but his experience here “opened up another world to me, gave me a broader social palette.”

The college also announced last week that David Goodman and Gregory Avis will join the college’s pro tem board. The new members will join other board members at a meeting on campus this weekend, Jan. 21–23. Open sessions of the board will begin at 1:30 on Saturday, Jan. 22, in Herndon Gallery.

“David Goodman and Greg Avis will bring to the work of rebuilding Antioch College their skills, their experience and their wisdom,” according to Board Vice-chair Francis Horowitz in a press statement last week. “We are fortunate to have their commitment to our common purposes.”

Goodman, a 1969 graduate of the college, was a lead negotiator, along with alumnus Eric Bates, of the college alumni’s first attempt to gain independence from Antioch University. During the two years after the university announced in June 2007 that the college would close the following year, alumni mounted several intensive efforts to save the college. Those efforts were successful in September 2009, when the college became independent from Antioch University after more than 20 years in the university system, and became once again a free-standing liberal arts school.

Goodman is a principal of North Arrows LLC, which specializes in power and energy investments. He is also a founding partner and principal of e-Solar Properties LLC. In 1980 he founded United American Energy Corporation, and led it up to its sale in 2003. He is also president of the Andrew Goodman Foundation for Human Dignity and Civil Rights, a nonprofit that honors his brother Andrew, who, with James Chaney and Michael Schwerner, was murdered in 1964 while pursuing voter registraton for African Americans in Mississippi.

After graduating from Antioch, Goodman received an MBA from Stanford University. He has written and lectured on civil rights, alternative fuels and green building and general business matters in his areas of expertise.

Avis is the first member of the college’s governing board who is not a graduate of the college. He co-founded Summit Partners in 1984, and has worked as a director of many public and private companies, including Digital Link Corporation, IMPAC Medical Systems, Integrated Systems RightNow Technologies and TGV Software. He holds a bachelors in political economy from Williams College and an MBA from Harvard Business School. He is currently chair of the Williams College Board of Trustees.