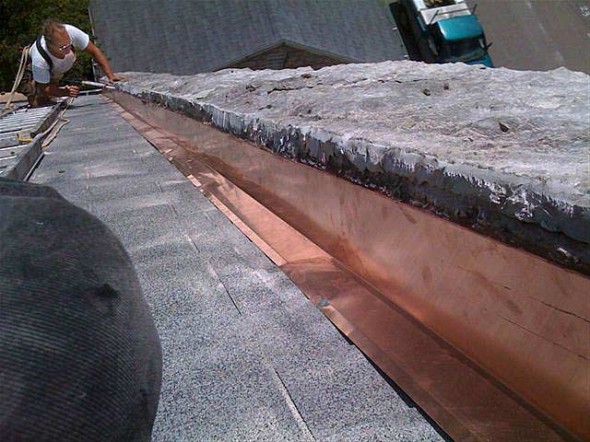 Chris Moore replaced the copper flashing on the Presbyterian Church roof over the summer.

During the year of its 150th anniversary last year, the First Presbyterian Church began the job of restoring its old and leaky sanctuary, thanks to an anonymous grant from a generous foundation. The grant for $48,000 was awarded last May to help the centrally located church to shore up its building, which has long been a space much used by the community. Several fundraisers last year, including several Friday Fling suppers and a concert given by church member Brian Mayer and friends, raised about $3,200 more. And the Presbytery, the church’s governing body, gave the local group $4,600 to repair the stonework on the steps of the main entrance. In addition, Chamber Music Yellow Springs has offered to donate LED spotlights for the sanctuary, which is expected to cost about $1,600. CMYS hosts professional chamber music performances five times a year at the church.

Work on the exterior began last summer. Thomaso Gregor and Chris Moore sealed and reinforced the roof and repaired some of the exterior walls of the sanctuary and ante-room, which had both been damaged by leaks and deferred maintenance. The interior work will begin next month, when the plaster will be retouched, and the insets behind the altar will be repaired.

The church will continue to hold services throughout the renovation.