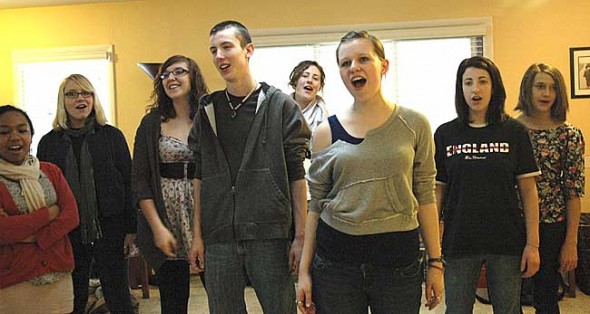 Yellow Springs seniors Lauren Westendorf and Donavan Berends will present as their senior project a musical review of song and dance this Saturday, Feb. 5, at 2 p.m. at the Mills Lawn auditorium. A group of theater students, including Lydia Jewett, left, will perform Broadway favorites at the event, which is a fundraiser for the high school theater arts program. Tickets are $5. (Photo by Kelsey Cundiff)

As part of their graduation requirements, each senior at YSHS must organize a senior project to benefit the community. The YSHS theater program has inspired Lauren Westendorf and Donovan Berends, so the duo is holding a musical review featuring songs from Broadway musicals to raise money for the program. Both share a love for theater and wanted their project to reflect that love, as well as feature all of the talent that exists at the high school.

The musical review and raffle will be held at Mills Lawn Elementary on Saturday, February 5, at 2 p.m. Admission is a suggested donation of $5 and includes one raffle ticket. Additional raffle tickets will be sold for $1 each. All proceeds benefit the YSHS theater program. The raffle includes gift certificates to downtown shops as well as other various items.

Westendorf and Berends selected a total of 12 songs from 10 different Broadway musicals to perform at the event. The musicals include The Sound of Music, Little Shop of Horrors, Rent, Wicked and Chicago, as well as several others. The songs are all choreographed by the pair and performed all by Yellow Springs High School students.

Westendorf and Berends began their rehearsals a week before winter break and have been rehearsing almost every day since then. It’s been a stressful process, Westendorf said, because both the seniors are involved in extra-curricular activities and their rehearsal space has been limited to their homes until they can rehearse at Mills Lawn the day before their show.

Westendorf has been planning her senior project for two years, ever since she performed in a previous YSHS student’s musical review senior project. While writing her senior proposal, Westendorf realized that she would like a partner in the project, and approached Berends. The pair shares an interest in musicals and performing and knew they would work well together.

The songs chosen for the review are all favorite songs of Westendorf and Berends, who both have a long history of theater involvement. Berends, a foreign exchange student from Holland, has been participating in theater since age 8 and has performed in numerous musicals at his high school. Westendorf’s love for theater began in kindergarten when she was cast as Dorothy in The Wizard of Oz at the Montessori school she attended. Since then she has participated in YSKP for eight years as well as the YSHS musicals since seventh grade. Her heavy involvement in theater is what drove her to want to use her senior project to benefit the theater department.

“I try to get as much theater as possible, which is why this is so important to me, raising money for the theater department, because it’s given so much to me, so I want to give something back.” Westendorf said.

Ultimately, the pair wants this musical review to showcase the importance of the theater program in their lives and the talent of local young people. With a week left until their performance Berends says that everything seems to be coming into place.

“You see that Lauren in putting so much of herself and her effort in and you can totally see that back in the dance,” Berends said.

*Kelsey Cundiff is a senior at YSHS and an intern at the Yellow Springs News.