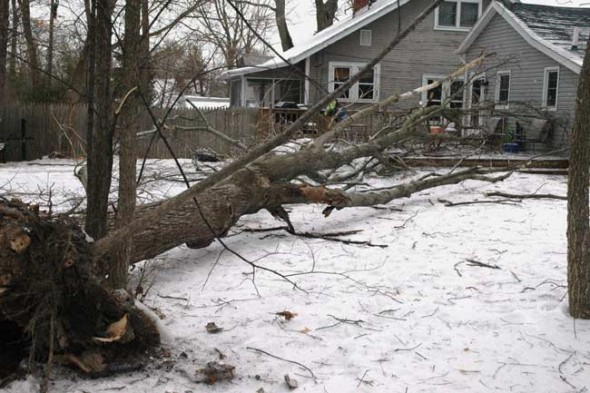 Tuesday night's freeze brought down a tree, which came to rest on the front portch of a Dayton Street home. (photo by Lauren Heaton)

Some villagers still without power

Some villagers remain without electric power on Thursday, Feb. 3, but Village electric crews, along with the crews of four surrounding towns, are working to restore power as soon as possible, according to an interview with Village Manager Mark Cundiff Thursday morning.

According to Cundiff, the Village crew, along with crews from Piqua, Lebanon, Tipp City and Versailles, are concentrating first on large areas that don’t have power. These areas include the Northwood Drive/Whitehall Drive area and a large area in the southern part of town bounded by Marshall Street to the north, Corry Street to the east, President Street to the south and Meadow Lane to the west. After that, other smaller areas of outage will be addressed and repaired. While about 80 percent of villagers were without power yesterday, the percentage Thursday morning was probably about 30 to 40 percent, Cundiff said.

In all, about 15 electrical workers are on the job today in seven crews of two or three, according to Cundiff, who said most of the work involves clearing branches and limbs off of lines so that power can flow freely.

Villagers whose power is still out but whose neighbors have power are urged to contact the Village at 767-7206 to alert the electric crew to their need.

On Wednesday, the Village invited all villagers seeking a warm place to go to come to the Bryan Community Center. According to Youth Services Coordinator Tina Fox on Thursday, about 100 villagers heeded the call to warmth and came into the center. Most came for short periods to charge up cell phones or use the microwave, she said, stating that the flow of villagers was continuous from about 8:30 a.m. to 7 p.m. While the building was officially closed at 7 p.m., the gym was left open in case anyone needed to go there, but there is no evidence that anyone spent the night, Fox said.

The Village continues to invite villagers to use the Bryan Center if needed.