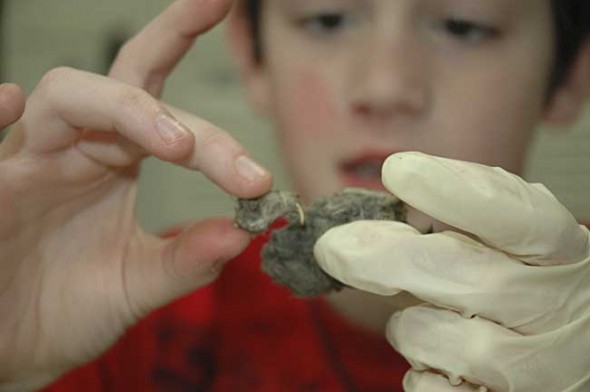 Travis Scarfpin dislodged a rodent skull from his owl pellet.

Mills Lawn fifth grader Juno Shemano held the fuzzy grey oval in her hand and patiently picked at it with a pair of tweezers. On her plate, piles of fur and bones were multiplying by the minute. “Ewe, it smells weird,” she said.
“Duh, it’s vomit,” someone offered from a desk nearby.
Each student in Ms. Lowe’s science class began dissecting an owl pellet last month. The egg-shaped mass of undigested fur and bones that owls regurgitate regularly tells the story of the raptor’s diet and habitat.
Students pulled from their pellets the tiny leg, paw and collar bones of rodents, shrews and birds, hoping for the chance to see a whole skull.
“Ooh, look at this,” Jakob Woodburn said. He held up the almost fully formed skull of what could have been a mouse scurrying for shelter before he was snatched by the talons of the hungry owl whose pellet Jakob was now disassembling.
“It’s cool,” he said. 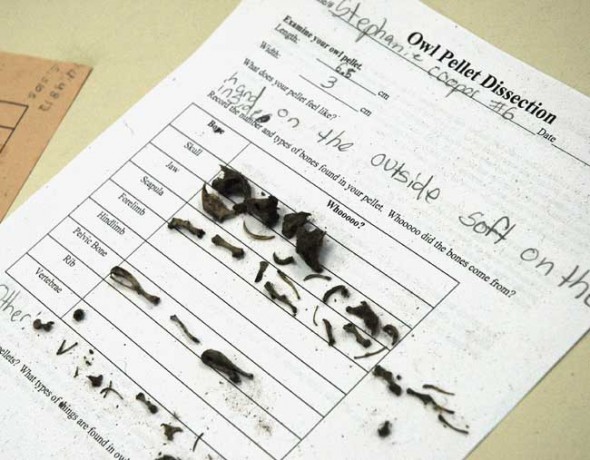