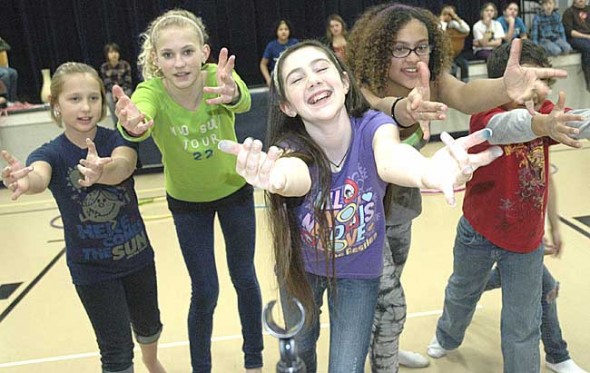 India by way of ‘Jungle Book’

The India in stories such as The Jungle Book has mesmerized children for generations and left them dreaming of Kaa the sslithering ssnake, Baloo the bouncing bear, King Louie of the monkeys and other talking, dancing animals. But as Mills Lawn students rehearse the Disney version of Rudyard Kipling’s original stories for the all-school musical this year, they have begun to investigate not just the animated India, but the real life India as well. And when they perform the Bollywood version of the show at Central State University this weekend, they will have visions of real Indian school children in their heads beside Baloo singing, “I wanna walk like you, talk like you, ooh ooh-ooh…”

Mills Lawn’s Bollywood Jungle Book opens Saturday, March 5, at 7 p.m. and plays again on Sunday, March 6, at 2 p.m. at the Paul Robeson Cultural and Performing Arts Center on the Central State campus. Tickets cost $3 and may be purchased this week at Mills Lawn between 8–8:30 a.m. or 2:30–3 p.m. The school recommends tickets be purchased before the day of the show.

The story unfolds when Bagheera the panther, played by Elliot Wiggins, tells Mowgli the man-cub, played by Ana Smith, that he must return to the man-village before Shere Khan the Bengal tiger, played by Annabel Welsh, finds him and eats him. On his way Mowgli gets mesmerized by Kaa, played by Kallyn Buckenmyer, and his coils, played by Grace Wilke, Olivia Chick, Shekinah Williams, David Walker and Kayla Brown. He meets his good pal Baloo, played by Bear Wright, falls underfoot of the elephant troop and its chief elephant Colonel Hathi, played by Duard Headley, and gets mixed up with the monkey King Louie, played by Nia Stewart, and his clan of clowning swingers, chief among them Lorien Chavez and Sumayah Chappelle.

Bollywood comes alive in the colorful saris the players wear, the classical Bharatanatyam dance style and the music that Guru Das will perform with his tablas and sitar during the show. The Indian immersion unit all 340 students at Mills Lawn have engaged in the past two weeks at school has served to stylize the production and contextualize the themes in the story. Smitha Magal gave a teacher workshop in classical Indian dance, which was then choreographed by Valerie Claggett for the show. Students in third grade “traveled” through India last week, going from classroom to classroom trying forms of yoga, playing the Indian game of chess and wearing Indian textiles. The younger students sampled traditional Indian food made by village resident Al Pana Sharma.

Some students were able to travel to India virtually by using Skype to videoconference with their counterparts in Haryana, India, through the British Council’s Connecting Classrooms Program. Annabel Welsh was interested to learn that some of the animals she thought lived in the jungle were in fact roaming the school grounds in Haryana, including two monkeys and a camel. And the students there have only one big meal a day at lunch, she said.

Bear Wright learned that there are places in India that are quite poor, where residents sometimes spend as little as $12 on food for an entire year, Welsh said. And they both learned a lot about India on the MLS morning news, they said, which gave them some idea about the country where the Jungle Book takes place.

Playing the military leader of the elephants, Duard Headley can appreciate the fact that Indians tend to live in a very rule-bound society, compared to “unorthodox” Americans. India has a longer history with a rich cultural tradition, out of which comes the “flowing dance movements” and “warm reds, yellows and oranges” of the traditional mosaic tiles.

To get the feel of the show, Director John Fleming also had to immerse himself into the culture of Indian entertainment by watching lots of Bollywood films. The films are often of epic length and include whole sets of characters who suddenly break into elaborate song and dance routines that include three and four costume changes. He also read Kipling’s original 19th century stories.

From the time the casting got under way last fall, the school’s 10 Media Club students have been involved in documenting the experience of producing the Jungle Book through interviews, videography and news clips, much of which can be viewed at http://www.yskp.org.

With Jo Frannye Reichert as the musical director and Becky Brunsman as the general producer, and about 40 other teachers, parents, school personnel and community members to support the show, the undertaking promises stunning results.