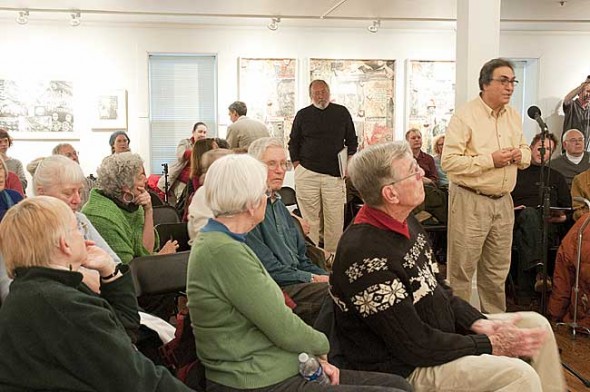 Public education in America is in dire straits, and people of all political persuasions need to put aside differences and find solutions together, according to Antioch College President Mark Roosevelt, who gave a spirited talk on the future of public education last weekend at the college.

“The trouble we’re in is so deep and profound that we can’t afford bickering and partisan solutions,” Roosevelt said, stating that in this country, “We’re not working hard enough and not thinking creatively enough” to address the problems.

“To make significant progress, we may have to change a lot of what we do,” he said.

The event, which was attended by about 80 people, was one in a series of talks on education in America co-sponsored by Yellow Springs public schools and the Morgan Fellows of Antioch College. The series is aimed at stimulating fresh thinking about educational solutions in the village for the school district’s 2020 Strategic Planning Initiative, according to Board of Education Vice-President Benji Maruyama in the introduction.

“The school board wanted to chart a future, and three to five years wasn’t enough,” he said. “We wanted room to make radical changes if we want to.”

Radical changes are needed, according to Roosevelt, who before taking the Antioch job in December was the superintendent of the Pittsburgh Public Schools. He began his work in education as a Massachusetts legislator who in 1989 took on sponsorship of that state’s Education Reform bill, which passed in 1993, changing how that state funded and ran its schools. Massachusetts schools now produce the highest performing students in the country, he said.

Given the recession and the lack of both state and federal money to address the education crisis, local solutions may be the only ones possible, Roosevelt said.

“If this movement is going to fly, it will fly locally,” he said. “If you accept the challenge, why not try it in Yellow Springs?”

But to make significant changes, the Yellow Springs community needs to become engaged in the issue, according to school board member Richard Lapedes in comments in response to the Roosevelt talk.

Yellow Springs could be “a beta site for the kind of change that must happen at this point,” Lapedes said, especially if the local interest in education “reached the same level of dialogue as with the dog park or fluoride.”

The challenge presented by Roosevelt includes, among other components, a return to rigor in public school education. The results of America’s recent decades of demanding less of students can be seen in the performance of American students when compared to those from other countries, he said, citing an international study of the highest-performing countries, in which the United States ranked 20th out of 30.

The rankings show two significant achievement gaps, Roosevelt said: first, the gap between American students and those of other countries, and second, the gap between African-American and white students in this country. That gap is so significant that the average African-American student is accomplishing in 12th grade what white students have accomplished in 8th grade, Roosevelt said.

And while addressing this racial gap is critical, the overall focus must include all public school students, he said.

“If we only focus on the race gap, we miss how badly all of America is doing,” he said. Roosevelt also stated that most of the creative thinking in educational reform is now taking place in poor urban schools, with suburban schools lagging behind.

In a short history of American public education, Roosevelt described this country’s system as beginning with the expectation that all students should receive rigorous schooling. However, after several decades reformers such as Antioch’s own G. Stanley Hall criticized this system as misguided, saying it was not realistic to expect all students, especially the children of immigrants, to be held to such standards. Thus began vocational education and the lowering of standards, Roosevelt said, stating that while this country once led the world in high school graduation rates, America now ranks 18th in graduation rates compared to other countries.

And while America’s brightest high school students still do well in international rankings, mainstream students do not, he said, stating that, “Mainstream sixth-graders in Singapore out-perform gifted American eighth-graders.”

A significant part of the problem in this country is that students don’t learn the level of educational content — facts and figures — needed for them to engage in creative or critical thinking, Roosevelt said, stating that the lack of content can be linked to many factors, including the decline of memorization and rote learning of facts.

Local control of education, with its resulting inconsistency in standards, has also contributed to America’s educational decline, Roosevelt said, stating that, “We now have 15,000 school districts. No one else in the world functions like this.”

While local control has in the past contributed to America’s strength as a nation, in education it created a moribund system that now can’t move or change, he said. However, because federal and state funding is now in decline, local reform efforts may now be the only ones possible.

Roosevelt suggested five main areas in which schools need to improve, including accountability (“the appropriate use of testing”), human capital, time, governance and culture.

“Schools are fundamentally a human capital business,” Roosevelt said, stating that districts must upgrade their processes for hiring and rewarding good teachers. Schools know little about the characteristics that make effective teachers, according to Roosevelt, who said the national program Teach for America is now working to identify those characteristics.

School districts also need to recognize the importance of hiring principals with vision and educational skills rather than just building managers, he said.

“Most problems are management problems,” Roosevelt said. “Most schools that are humming have creative and energetic principals.”

“Time” is also an area in need of improvement, because American students simply don’t spend enough time in school, he believes, stating that in this country students spend on average about three years less in school than in countries with high educational performance.

Governance is also a problems, according to Roosevelt, because “school boards as a whole do not know what they’re doing.”

While boards’ appropriate job is to set vision and policy, they too often become involved in running the schools, which should be the job of the superintendent, he said.

Lastly, American culture “as a whole is not supportive enough of education,” Roosevelt said, stating that if he could improve only one aspect of American education, it would be to raise the status of teachers. In countries with high performing school systems, such as Finland, only one of seven young people who apply to education schools get accepted, he said, indicating the high status of the teaching field.

After Roosevelt’s presentation, villagers and Antioch College community members asked questions and raised concerns. One benefit of the current crisis in American education is that almost everyone knows there’s a problem, according to school board member Richard Lapedes.

“I believe the crisis in a terrible way is our best friend,” Lapedes said, stating that “the crisis is so intractable, even disbelievers believe” in the need for change.

But Americans are not as aware as they should be, partly because politicians, including those in the Obama administration, feel there’s no political benefit to delivering bad news.

“We don’t sense the magnitude of the thing,” Roosevelt said.

Part of the problem is that Americans have lost their confidence in their ability to change things for the better, Roosevelt said, stating that recent trends such as the rise of the Tea Party shows that, “Most Americans feel something is slipping away in their lives,” which could be linked to their standard of living, which for middle-class Americans has remained stagnant for three decades.

Many Americans also don’t believe that all students can do better than they’re doing in school, Roosevelt said, but holding this belief is essential.

“The brain is a muscle,” he said. “Every kid in class can learn to a higher standard if you work with them.”