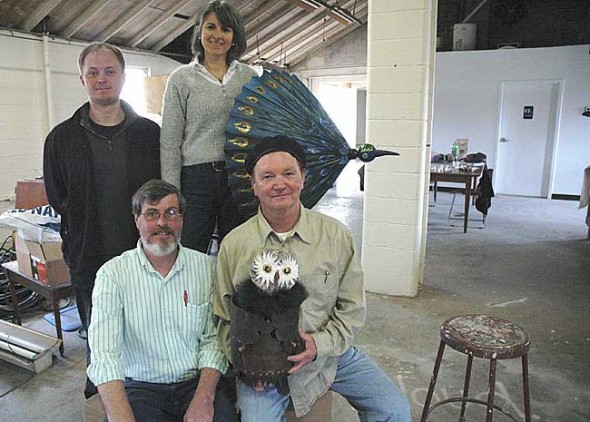 YS Kids Playhouse will hold its annual fundraiser to help save the summer season at its new space on the Antioch College campus next month. Pictured are, clockwise from top left, production coordinator Tom Clevenger, board member Nadia Malarkey, director John Fleming and board member Roger Beal. (Photo by Lauren Heaton)

On the YS Kids Playhouse stage in the summer of 1998, Donald Trumpmall kidnapped Hoarse Heartright so he could turn Ponderosa Ranch into a megamall with a “Yippy-I-O-Ki-A!” In 2005 the company used the shadow puppets of flying bombers and white-winged ghosts to choreograph the atomic tragedy in Hiroshima. And in 2009 it was again with YSKP that a young James Bond first learned the stealthy ways of secret agent 007.

Every summer for the past 15 years, YS Kids Playhouse, the little theater that could, has put on at least one musical and often two original productions at Antioch College theater spaces. In doing so, the troop has shared the profound educational experience of creating a stage production with hundreds of local and area youth each year.

But what if suddenly there wasn’t a YSKP summer season? This year that scenario is an unfortunate possibility.

YSKP has made some positive strides over the past year, including a potential new home for the theater. But the company has not been insulated from the effects of the recession, according to YSKP Artistic Director John Fleming. This year a significant funding source, an arts education for youth grant from the National Endowment for the Arts, was not available to support the start of the summer season, as it had been in the past. The NEA has typically funded YSKP with $47,000 each spring to pay a playwright to write the stories, musicians to compose original scores, choreographers and other artists to create the big musical and the smaller play the company produces every year.

While a different NEA grant is still a possibility for later in the year, YSKP needs funds now to secure the summer season, Fleming said. The theater and its board must make their decision by early April. At the very least, the company needs $13,000 to start making plans and hiring artists next month, YSKP Projects Administrator Tom Clevenger said. Before learning the NEA funds had been diverted, the company had planned to base its musical on the Cotton Club theme of jazz greats Fats Waller and Duke Ellington, while the play was an adaptation of the memoirs of local engineer Bill Hooper, who built the college amphitheater and the Glen Helen Building.

YSKP lost its home when Antioch College closed in 2008. Since then the theater has worked hard to maintain its summer season and its year-round slate of arts classes in the community. Most of the classes and rehearsals have been held at the First Presbyterian Church, while its shows have been staged at both the college amphitheater and at Young’s Dairy, and its props and equipment have been stored in three separate locations around the village, Fleming said. While many theaters in this situation would have closed, according to board members Roger Beal and Nadia Malarkey, the leaders and supporters of YSKP remain committed to their mission to educate the community’s youth through the collaborative and creative process.

“There’s a huge amount of sweat, hard work and commitment to make sure this happens for the kids in the community — we’re not going to fold in the face of adversity,” Malarkey said.

Last winter YSKP began leasing the long, one-story building behind the amphitheater on the college campus, which the college has helped to renovate by adding a water line and a new restroom. YSKP has also improved the interior of the facility, and is still talking to college leaders about continued use of the space, according to college spokesperson Gariot Louima. Meanwhile, the theater has already secured an anonymous donation for a sprung floor in the dance studio, and there are hopes of hiring Antioch co-op students to work with the theater, Malarkey said.

One way supporters can help is to attend the YSKP annual fundraiser, to be held in the new space on campus, on Saturday, April 16. The event will feature a preview of the Yellow Springs High School musical Chicago and performances by local and regional arts professionals, including actor Bruce Cromer, musician Kevin Mulhall, YSKP board member Libby Scancarello, and others. Tickets are $50 in advance, $55 at the door.

Though the theater has been well-supported by local businesses and individuals, YSKP is looking for corporate sponsors and underwriters for long-term sustainability of its program. Over 75 percent of the funds are used to pay local and regional artists for a production that then comes back to the community again as local art, as well as local education. And according to Malarkey, there is no value that can be placed on the benefits of learning through theater, which includes not only literary and technical skills, but also the chance to collaborate with peers and adults in the co-creation of an original work of self expression.

“What price can you put on the impact this has on a child’s life?” she said.