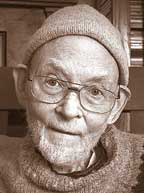 Ken was born in 1930 to Horace and Ava Champney. At age 5, to the amazement of his parents, Ken taught himself to read a storybook he wanted to finish, knowing only the letters of the alphabet. He went to the Antioch School, with a year of public elementary thrown in for good measure.

The summer before he entered high school, Ken attended Circle Pines camp in Michigan, which was to become perhaps the major formative influence of his early life. Run by the Cooperative Movement, the camp transformed an old farmland into a working farm and camp with a series of work projects. Altogether Ken spent four summers at Circle Pines, and one school year in the area. It gave Ken an overall liberal outlook on life, and introduced him to the concept of intentional community. He spent his last two years of high school in Yellow Springs, where he was very active in recreational softball, and was the reigning high school ping-pong champion.

Ken attended William Penn College, a Quaker college in Iowa. He was influenced by its president, Cecil Hinshaw, and his pacifism. Pacifists at that time believed that if the military draft was reinstated, the United States would inevitably get involved in unnecessary wars. They advocated total noncooperation with it. But Ken wound up back in Yellow Springs after Hinshaw was dismissed by the college over administrative differences.

Then began what Ken cited as the most significant thing in his life: in 1949, as an apprentice printer at the Yellow Springs News, he began what became a 45-year career as printer, publisher owner, and, for a time, editor of the News. The struggling paper had recently been purchased by Ernest Morgan and the Antioch Bookplate Company, and Ken apprenticed there for a year. He learned how to run and maintain multiple complex pieces of machinery, each of which required a seven-year apprenticeship by industry standards. But none of it would have been possible without the active help of his new wife, Peggy Palmer of Delaware County, Pa., who dropped out of Antioch College during her first year there to print the newspaper with Ken.

As committed as they were to the paper, Ken and Peggy were equally committed to Ken’s belief in draft resistance. Inevitably, Ken was sent off to prison where he served for 20 months, while Peggy produced the paper every week, with minimal assistance. Following his prison term, Ken continued a long and successful partnership with editor Kieth Howard, while Peggy spent most of her time at home raising a family. In one of the notable events for the paper, they fended off a challenge from the right-wing, McCarthyist Yellow Springs American, which attempted to buy the News in the 1950s, and when they were refused, tried to no avail to drive them out of business with a rival paper. In his time at the News, Ken employed and mentored many local young people.

In family life, Ken and Peggy were integral early members of the intentional community The Vale, which is still going strong today, and in which Ken was active until the end, serving as its treasurer until a few months before his death. They cared for children from needy neighboring homes, and adopted a child as well. In the 1960s they took on a simple life, living as much as possible off of the produce of their garden. A common dinner for the family in those days was one chicken, feeding nine people, along with many vegetables (and occasional ice cream). They instilled their love of music in their children, and it became an important part of all of their lives or professions. Ken and Peggy were also very active in the local Quaker meeting.

Ken’s social activism continued with the Peacemakers, a group dedicated to nonviolence. Ken and Peggy volunteered their printing services for the group to start its newsletter. It published writings by Gene Sharp on nonviolent resistance, which many years later, in 2010 and 2011, were used by protesters in Egypt and elsewhere in the Middle East to pull off their largely nonviolent regime change action of the last several months. Ken was gratified to learn that these early efforts of the Peacemakers had paid off in such a significant way.

Ken also believed in resisting the income tax, since such a large part of it goes to fund the military. He confronted the IRS by refusing to withhold taxes on his employees in what he judged to be the military portion of the amount, and continued this practice even under threat from the IRS. However the IRS did not find any grounds to sue him. Personally, he kept his income low enough, and his charitable contributions high enough, to stay under the taxable limit year after year. In his later years, Ken devised an investment system which enabled him to avoid income taxes.

Ken served on the boards of several businesses and local organizations. He managed the scholarship endowment fund for Friends Music Camp, which was co-founded by his wife Peggy who has run the camp for 32 years.

Recreational activites of chess, bridge and music were important to Ken. He was a regular supporter of local chamber music, and took up the piano after his retirement. He was an avid reader of periodicals of multiple points of view, always keeping up on current events. He became very busy with bridge upon his retirement in 1995, regularly attending advanced weekly playing groups in Springfield, Dayton and Yellow Springs. He became an international grandmaster, accumulating enough points despite never travelling farther than Cincinnati to play, until he and his partner Ralph Welton won enough to get invited to the nationals in Los Angeles. He became close and lasting friends with members of his local and area bridge groups.

Ken is survived by his dear wife of 60 years and partner in all endeavors (other than bridge), Margaret P. Champney; a brother, Tim Champney, of Washington, D.C., sons Carl Champney (Charlene Prestopino) of Yellow Springs and Eric (Kimberly) Thomas of Jeffersonville; daughters Rebecca (Thomas) Hodgkins of Centreville, Va., Wendy (Matthias) Enderle of Zurich, Switzerland and Heidi Champney of Monkton, Vt.; and several grandchildren. Ken requested that any contributions in his memory be made to Friends Music Camp, to Hospice, or to either the Sierra Club or the Rainforest Action Network for their actions in opposing mountaintop removal mining practices. A memorial service is planned on Tuesday, May 3, 7:30 p.m. at Rockford Chapel in Yellow Springs.