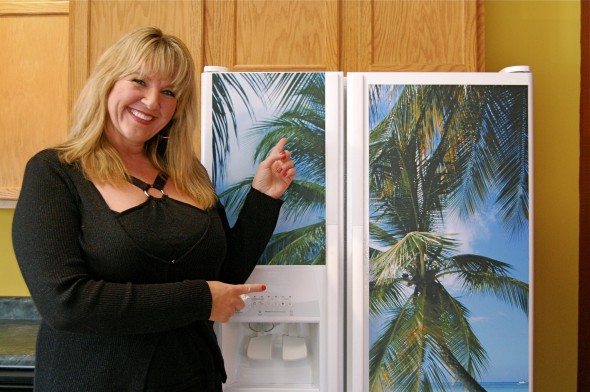 Local entrepreneur Jan Augenstein will finally get her moment in the spotlight on Friday, April 15. Augenstein and her invention, Fridgefronts, are set to make their long-awaited appearance on the ABC show Shark Tank. The show features a panel of wealthy business people who evaluate products from innovators all over the country, sizing them up, cutting them down and, if they’re lucky, backing their products financially.

Augenstein’s invention, Fridgefronts, are colorful magnetic sheets meant to decorate the fronts of refrigerators, and have previously been featured on The Rachel Ray Show. The Yellow Springs News first reported on Augenstein’s appearance on the program in February of 2010, and after over a year of Augenstein’s contractually-mandated silence on the outcome of her appearance, community members will learn whether or not Augenstein was able to convince Shark Tank‘s formidable panel to invest in her product.

Augenstein will be hosting a party to view the premiere of the episode on April 15 at Bogey’s, located inside Rocky Lakes Golf Course on Route 68, just outside of town. The party will begin at 7 p.m., with the episode beginning at 8 p.m. At 9 p.m., local band The UnderCovered will perform.

For more on The UnderCovered, visit their facebook page.