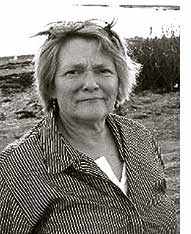 Lynn Russell Hickerson died peacefully surrounded by friends on Friday, April 15, in her home in Orrington, Maine. She was 68.

Born in Dayton on March 8, 1943, Lynn grew up in Yellow Springs, where her father was an engineer for Vernay Laboratories and her step-mother was a social worker. Much of Lynn’s childhood was colored by her family’s history in civil rights activism and her father’s long and precedent-setting fight with the House Un-American Activities Committee, which was won in the U.S. Supreme Court in 1962. Although Lynn lived in Maryland and Maine for much of her life, throughout the years she stayed in close contact with many Yellow Springs people and Lynn would routinely visit “the village” throughout her life, especially between 2003–2007 when taking care of her late step-mother, Margery Russell.

While growing up in Yellow Springs, Lynn became a dedicated flute player and music lover starting from early childhood. She continued her musical studies at Indiana University where she graduated in 1965. In 1965 she married folksinger Joe Hickerson and moved to the Washington, D.C. area. With Joe, she performed locally and nationally, and on Folk Legacy Records.

Living in Accokeek, Md. for 14 years, Lynn was an avid community activist, with involvement in the Prince Georges County Task Force on Poverty, Alice Ferguson Foundation and President Carter’s Task Force for National Heritage Trust Enforcement Committee. In keeping with her lifelong interest in maritime history, Lynn worked for the National Trust of Historical Preservation in the office of Maritime Preservation from 1979 until 1991. Here she facilitated funding for preservation of many “tall ships,” other historic vessels and lighthouses across the entire United States, as well as management of maritime preservation conferences and promoting legislation for protection of historic shipwrecks. Additionally, she was a leader in the successful effort to change Coast Guard regulations so that authentically restored historic vessels could legally be used for student training. She was particularly pleased by the successful restorations of the tall ship Elissa and the schooner Bowdoin.

From 1992–1994, Lynn lived in Keene, N.H. where she received a degree in marriage and family therapy from Antioch New England. In 1994 she moved to the Bangor area, where she enjoyed remodeling an 1835 house and “farmette” with meticulously planned garden and sheep flock (two ewes, one ram and a new lamb as of last week). But her abiding passion was her new career as a family therapist as she worked with the St. Michael’s Center “Home-Based Family Therapy Program” until 2006. It was typical of Lynn’s commitment to larger community issues that she helped lead a successful legislative campaign to enable state licensing of private family therapists and provide health insurance coverage for their patients. Recently, when asked why she had finally chosen family therapy for her life-work, she replied,” I wanted to prevent needless suffering”.

Preceding her in death was her mother Marsha Spofford Russell in 1947, her brother, Peter Ibbotson Russell, in 1967, her father, Norton Anthony Russell, in 1996 and her stepmother Margery Stewart Russell, in 2007. She is survived by her son, Michael James Hickerson, of Brooklyn, N.Y.

The CaringBridge Web site, http://www.caringbridge.org/visit/lynnrhickerson, has many notes and photographs sent by friends and will have information about a fund that has been established at her hometown of Yellow Spring to provide assistance to college freshmen: The Peter I. Russell and Lynn R. Hickerson Foundation.

There will be two memorial gatherings for family and friends: one in Orrington on June 25, and one in Yellow Springs in September; date, time and location are forthcoming.