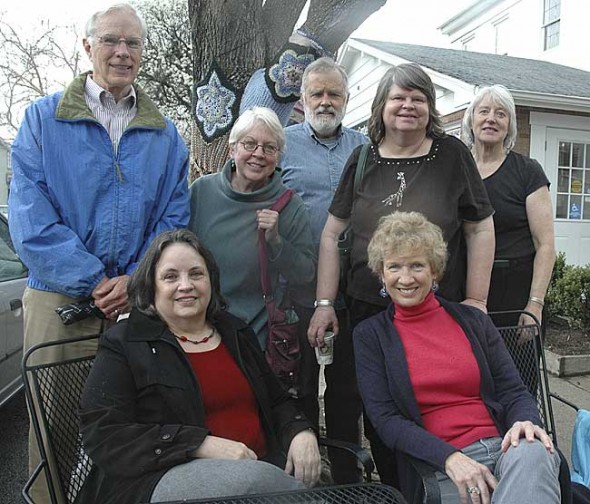 Several of the 26 returned Peace Corps volunteers who live in the village gathered recently for a photo. They will celebrate the organization's 50th birthday this Sunday, April 17, from 1:30 to 4 p.m. at the Senior Center. Shown above are, seated from left, Virginia Caudill and Priscilla Janney Pace. Standing are, from left, Hap Cawood, Jeanna Lemkau, Hardy Ballantine, Kay Reimers and Suzanne Oldham.

This Sunday, March 17, from 1:30 to 4 p.m., local returned volunteers have an opportunity to celebrate their experience and the organization, which is this year honoring its 50th birthday. The event, which is free and open to the public, will feature Thai food and a presentation from recently-returned local volunteer Helen Lapedes, who served in Thailand.

In an article in the April 14 News, several of the local returned volunteers spoke of their experiences in places including Nigeria, Sierra Leone, Nicaragua, Palau and Thailand. Some were assigned to teach  English, while others worked in public health or farming.

“It permanently altered me, in ways that shaped me as an adult,” said Jeanne Lemkau, of her two years in Nicaragua.

As a 21-year-old, Lemkau worked with mothers and children in poor rural villages where people lived in straw huts without water or electricity. She rode to work on horseback, and remembered riding home on horseback beneath a volcano, listening to the parrots in the trees.

Lemkau was deeply moved by the generosity of the Nicaraguan people. No matter how little they had, they wanted to share with others, she said, citing a good friend named Lydia who insisted on feeding her dinner when she had little food. Lemkau’s daughter’s middle name is Lydia, after the Nicaraguan woman.
For more stories about local returned volunteers, see the April 14 issue of the News.