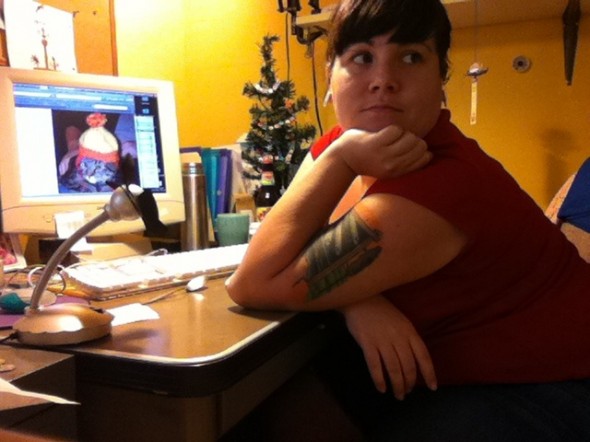 Taking a break from what was clearly very important work.

BLOG – I get paid for this

Like many of my young adult peers, I have worked several jobs during and since completing my education. These jobs were all of varying degrees of payscale, degrees of relation to my education and degrees of general weirdness.

But the weirdest job I have ever worked is the one I’m working at right now.

Allow me to clarify.

When I was 18 years old, I moved to Tallahassee, Florida to attend Florida State University. The only job I could find upon arriving there was selling knives. I sold really sharp things to really rich people; and also to my parents, who are probably still paying for them. I was the worst. I worked with a guy who literally sliced the end of his finger off during a demo, and he still ended up selling more knives than me that day. My best trick was banging the combination knife and spatula on the table, producing a lovely, distorted ringing sound and saying, “You hear that? Ya won’t get that with Ginsu!” The last straw was the night a church member and family friend entered his kitchen to find me giving my sales pitch to his very kind and patient wife, loudly interrupted me to say that I was wasting my time, that he was the man of the house and all money matters came through him, but made me do my whole pitch anyway so he could critique me. 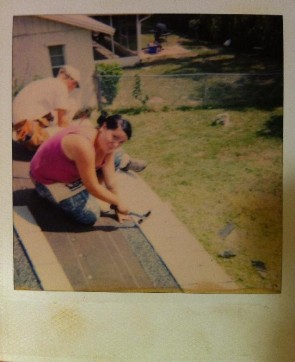 I will literally never look this cool again. And I didn't even have a tool belt.

When I was 21, I worked for Habitat for Humanity through Americorps. I spent a year building houses in South Florida with 9 other young adults, paired off in tiny, one-bedroom apartments that were poorly air conditioned and smelled weirdly like crackers. I worked side-by-side with families who would soon own the homes we were building, and I made friends I will keep for the rest of my life. One time my friend Beth and I called the warehouse to request that the new warehouse manager find and have delivered to our work site a set of very important gibber clips. Our day’s work could not be finished, we told him, until we had those clips.

The warehouse manager called back after looking for a while. “I can’t seem to find them. What aisle did you say they were on?”

“Uh…the…aisle seven. Or six, or something. Just get the gibbers, man.”

I guess eventually we told him there was no such thing. Eh, I can’t remember.

After college I moved to Kentucky, and I got a job in a bakery. My very first day, two teenagers came in to pick up the cake; it was an elaborate, three-tiered cake, with icing in many colors and little fondant flowers all over it. It was for a little girl’s birthday party.

“How are you going to be transporting the cake?” my new boss asked the girls.

One of the girls pointed outside at a convertible, top down.

“And where will you be transporting it?”

The other girl shrugged. “Tennessee?”

I had worked in the cake business for less than three hours, and I could clearly see this was going to end in disaster. 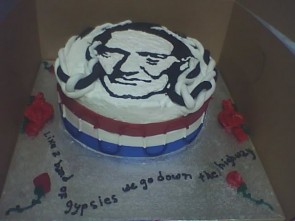 A cake I made for Anthony's birthday during my bakery tenure. This is not indicative of what I usually did; mostly I made cupcakes and told people that, yes, red velvet cake is just chocolate with red food coloring in it.

An hour later, the cake came back in to the bakery; this time it was being carried by a middle-aged woman, with icing on her hands and fury on her face. The top layer of the cake had slid off somewhere between Kentucky and Tennessee, and she was demanding a refund. My new boss, as credulously as possible, told her that was bullcrap. I saw the rage behind her eyes spike, and before any of us could take cover, the woman raised the lopsided cake in the air and threw it to the ground, shouting, “YOU CLEAN IT UP!” Any and all innocent bystanders were hit. A customer looked down at the turquoise and pink stains on her white tennis shoes. My boss handed me a broom.

I worked there for two years.

And now I work here, at the Yellow Springs News. As any of our many patrons-about-town can attest, it is a strange, labyrinthine little office that we occupy, with shelves of vitamins up front and at least one dog wandering around during some part of every day. Come by at the right time, and you’ll see me trying to pry the telephone cord out of my infant daughter’s grip with one hand, and spell-checking a letter to the editor with the other. We eat chocolate a lot. Sometimes our editor emits a distinctive hoot of joy, after reading or hearing good news (or because of the chocolate). Occasionally I catch somebody doing yoga. I have health insurance.

But after having worked quite a few jobs, many of which are not mentioned here, the thing that strikes me as weirdest about my work here is how rarely I am made to feel like I am less than one-hundred-percent human.

There’s a weird shift that occurs in human communication when it comes to the workplace. Something happens when you step behind a desk and say to another person, “May I help you?” Without warning, you transform from a human being into a wish-granting machine, with infinite power and negligible personal feeling.

But I have, over the past year-and-a-half, been pleasantly surprised to realize that I have not been yelled at once. Occasionally there has been grumbling, and perhaps a stern reproof here and there. But mostly people around here are just polite. Maybe it’s because they like the paper. Maybe it’s because my kid is so dang cute nobody can manage to produce a cross word when she’s in the office.

I think, though, it has more to do with a desire to understand. The same understanding that manifests itself as a weekly peace vigil or a public stand against harmful environmental practices can also mean just being nice to the person who brings your coffee, or fixes your toilet or, in my case, sometimes has to tell you that you missed the deadline for this week’s paper.

In another world, I would definitely have gotten cake thrown at me for that.

One Response to “BLOG – I get paid for this”