Joyce McCurdy retires — Imparting the complexity of past 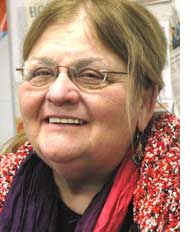 When Joyce McCurdy left her teaching job in Springfield and took a pay cut to come to Yellow Springs schools, classes were still being held at Bryan High School, right next to the train that ran through town. That was 1968, the year Martin Luther King Jr. was assassinated, Richard Nixon was elected and the North Vietnamese won the war.

McCurdy’s commitment to sharing not only her experience of those events, but a multidisciplinary and multifaceted view of the world in general with her students is no less passionate today than it was when she started teaching 43 years ago. It’s one reason she retires this year from Yellow Springs High School with a mix of sadness and satisfaction, and a store of memories.

McCurdy’s classroom is a large, white box with one computer and a nifty gadget that allows her to project information from her computer screen onto the wall. She doesn’t need much else, she said in an interview last week, because she teaches her history, government and literature courses not from a handbook but from her head.

“Most of my lessons are spontaneously developed from the material stored in my mind,” she said.

This oral teaching tradition is important to McCurdy partly because she has personally witnessed some of the historical events that are often misrepresented in textbooks. In telling students her view, she is demonstrating one of the three things about history she urges all of them to consider. First, the past is always a matter of perspective. Second, what constitutes an historic person or event is more accurately a series of ideas and events that come to be typified by one well-known representative. Third, what is historically significant is often so, not because it represents the times, but because it does precisely the opposite. Hippies, for example, were iconic of the 1960s but did not represent the dominant culture, McCurdy said.

But discussion is never complete without some information to back it up, according to McCurdy, whose most prized educational tools are her books. She has hundreds of them, each portraying a different perspective about, for instance, not only the lives of Martin Luther King Jr. and Malcolm X but also the black Muslims, the white separatists, and the American citizens who lived through the major events now portrayed in school textbooks. Many of the books that students like best are the same classics that moved her as a young student, including the Scarlett Letter, Black Boy, The Jungle and Lord of the Flies. Slightly more contemporary versions of history in books such as Bury My Heart at Wounded Knee, Farewell to Manzanar and One Day in the Life of Ivan Denisovich offer students critical perspectives that some may consider to be already part of the collective memory, but which McCurdy feels illustrate for students that history is alive and changing every day.

While stories grab students and hold their interest, making concepts relevant to their lives is also an important way to help students to want to learn, McCurdy said. Take public policy, for instance. It sounds dry enough to make a kid drool, but McCurdy makes it practical by, for instance, having students calculate what their own Social Security benefits might be when they retire. The exercise allows them to see that current decisions could dictate whether they can plan to rest easy in their old age or find a job they can perform well into their 90s. McCurdy then has her students compare the Roosevelt era to the current one so that when they become leaders and decision makers, they have historic data to back up critical thought about the issues that most affect the world.

The volumes of information, concepts, and skills McCurdy wants to impart still swirl in her head with an urgency that seems unusual after 43 years on the job. Her commitment to Yellow Springs students comes partly from her love of the town she came to because she wanted to teach students who were interested in learning. She was so impressed by the earnest curiosity of youth who made eye contact and engaged in creating a rigorous academic environment.

“The students have a curiosity and don’t necessarily want to be seen as scholarly, yet they’re very competitive,” she said. “They’re intelligent, and these kids are also fun to be with.”

Yellow Springs students are dependable and committed to working together toward a goal, McCurdy said. Many students here are also leaders, she said, which is important because it sets a standard that can determine the success of the entire class.

McCurdy gave back as much energy as she got, volunteering to lead extra curriculars such as year book, prom, student council, concessions, senior trips, and the theater group, which under her watch put on Hello Dolly, West Side Story, Guys and Dolls and Anything Goes. And she has continued to lead both quick recall and mock trial teams, which have both gone to state twice and won many district and regional titles over the years. Many of those teams included students McCurdy feels honored to have taught, such as Air Force General Edward Rice, Stanford kicker Aaron Zagory, filmmaker Robert Graham and director Dan Jenkins.

Though 43 years is a long career, in many ways, McCurdy feels now is not the right time for her to leave. The village is at risk of changing, she believes, and losing the humanistic values of social justice and community activism that drew her here in the beginning.

“Then it was about ideas…Now they’re selling an image,” she said, adding that a part of her wants to stay to help restore the integrity of the village.

The school district is also in a state of change, precipitated by a spending deficit that threatens to manifest in micromanagement of classroom time that, according to McCurdy, should be the domain of the teachers that school leaders choose to hire.

And in some ways, McCurdy has felt nudged due to budget concerns to leave a position she might have continued for several more years. But the decision to retire was ultimately the teachers’, YSHS Principal Tim Krier said this week. The district created a retirement incentive package, and some chose to take advantage of it, while others chose to stay on, he said.

Leading a public school is tricky business, and McCurdy has held tenure long enough to see the coming and going of nearly two dozen principals and superintendents, including a few she liked, and others she felt would have been more effective if they had done their jobs and trusted teachers to do theirs.

But whatever the quality of her relationships with her overseers, McCurdy feels that her connection to her students has fulfilled and sustained her. And because she is still brimming with fervor to keep learning and teaching, after she retires she expects to pour the overflow into something similar, perhaps at an area college.

When McCurdy began teaching in Yellow Springs, she carried a briefcase, and people told her to “loosen up, relax!” Now it’s a different story.

But her true fit is as a teacher, and it’s what she will always be.

“I can’t possibly visualize not doing this somewhere,” she said.