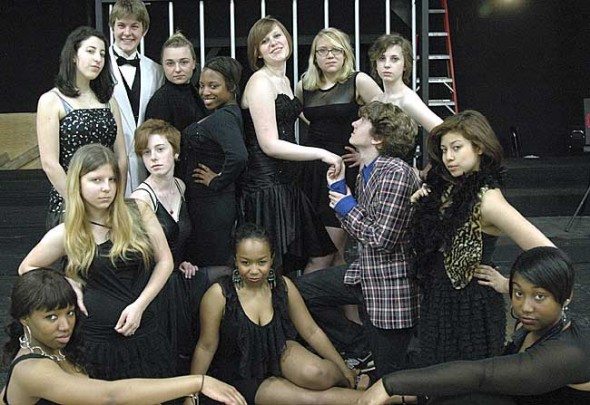 If any high school could perform the edgy, somewhat risqué musical Chicago, it’s Yellow Springs. The show’s vaudevillian song and dance numbers are difficult, its despicable characters challenging — but for the talented group of young actors, it’s simply fun.

“Not a lot of high schools can do this show,” said stage manager Jess Shake at a rehearsal last week. “But these are really, really talented kids.”

The tale of murder, manipulation and fame set in 1920s Chicago opens Friday, April 29, with performances continuing on Saturday, April 30, and Sunday, May 1, and next weekend — May 6, 7 and 8 — at the Mills Lawn Auditorium. Friday and Saturday performances will be at 8 p.m. and Sunday matinees at 2 p.m. Tickets are $9 for adults and $5 for seniors and students.

The story follows murderesses Roxy Hart (Lauren Westendorf) and Velma Kelly (Malaika Carver-Halley) in jail as they craft their legal defenses with the greasy lawyer Billy Flynn (Elliot Cromer) and plan their return to vaudeville while consorting with seedy characters like the corrupt Mama Morton (Anne Weigand).

On her lead role of Roxy Hart, who will walk over anyone in her quest for fame, Westendorf said: “This is the first time I’ve played a mean character. It’s more fun to play mean.”

“It’s a complicated character — I was blessed with the role,” said Weigand of the matronly Morton, whose big musical number, “When You’re Good to Mama,” extols her system of tit for tat as the “mistress of murderer’s row.”

“She’s very rough,” said Carver-Halley of her character, Velma Kelly, who leads the show’s opening number, “All That Jazz.”

“I’ve loved [the role] and I love [the show’s] difficulty because it’s dark but fiery at the same time,” Carver-Halley said.

Adam Zaremsky, who plays Roxy’s loyal husband Amos, said he might be the only nice person in the show.

“I think it’s really funny, sarcastic, satirical humor, and it’s pretty dark — these are not very nice people,” he said.

Backing up the lead actors is a chorus of strong singers and dancers, including a cast of 31 high school and McKinney students and their technical crew of 13. In other roles are Miranda Russell as Mona, Lydia Jewett as Annie, Zyna Bakari as Liz, Emma Holman-Smith as Hunyak, Liana Rothman as June and Rory Papania as the master of ceremonies.

The school district relieved Murphy of his duties as director on April 14. Superintendent Mario Basora declined to say why Murphy was removed, but Murphy said one reason may be that some students were uncomfortable with his directing style and expectations.

The cast is staying true to his vision for the show, including the Burlesque-style choreography arranged by Bob Fosse for the original Broadway production of Chicago. Being without their director for the final two weeks of rehearsal has been a challenge, but the young actors and production team are persevering.

“I think it’s never good to lose a director but that’s the situation we’re in,” Westendorf said. “If anything it’s united us more — because we all have to make it work.”

Elliot Cromer, who plays the slick lawyer Flynn, said the dismissal of Murphy was “a shock” but that the cast feels the show is in safe hands with Carlock and Shake, who have taken over the director’s duties. For Carlock, it comes down to the Yellow Springs students’ taking responsibility for their show.

“That’s why Yellow Springs has such great musicals — because the kids take ownership,” said Carlock, who has 30 years of theater experience. “They are unusual high school kids — they are really focused, very positive kids. And they want this bad — to really rock the show,” Carlock said.

For the 16 cast and crew members who are graduating seniors, there is an extra incentive to put on a great show. Zaremsky, in his 10th high school play, said his final performance will be bittersweet.

“It’s the end of an era — there’s been a Zaremsky and Cromer in [plays] for an incredibly long time,” Zaremsky said, referring to his two older brothers, Matthew and Aaron, and Elliot Cromer’s older brothers Charlie and Toby.

The seniors, especially, value the camaraderie of working together on a play.

“It’s been a treat working with such a talented class,” said Westendorf, in her sixth musical at Yellow Springs High School. “I’m so close with everyone in the theater program — they really become your family.”

Chicago is based upon a book by Fred Ebb and Bob Fosse with music by John Kander and lyrics by Fred Ebb. Chicago is produced by special arrangement with Samuel French, Inc.