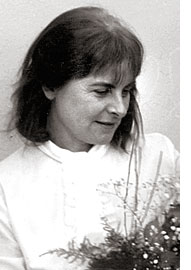 Beryl Aileen Rose Schicker was born in 1922 in Regina, Saskatchewan. She was the first of five siblings born to Leland and Ann Rose, and spent her first thirteen years on a farm during the Depression, where her family endured dust storms, drought and locusts. Her resourcefulness was formed by that prairie landscape and experience, as well as her active imagination and careful observation of nature. She attended a one-room schoolhouse where she developed her life-long love of books and learning.

Her family moved to Ontario, where she met and married Edward Eagleson, a New Jersey cousin of neighbors in Joyceville. She often remarked on the cultural change from having moved from a small hamlet of seven houses to Nutley, New Jersey, which was within 15 miles of New York City. Beryl and Edward had three children, Diane, Lee and Denise, and lived in Columbus, Ohio, and Omaha, Neb., until they were divorced in 1959. Beryl returned to school to complete her GED, and then attended Omaha University, where she received her bachelors degree, summa cum laude in English literature, and then her masters degree with honors, having written a dissertation on e.e.cummings. She discovered her great love of teaching at Omaha University, and taught literature, humanities, and women’s studies in community college locations in upstate New York and in Kalamazoo, Mich., retiring from Kalamazoo Valley Community College in 1986.

Beryl met the great love of her life, Stephen Schicker, in Omaha and they spent 47 years together, engaged in an ongoing dialogue about art, music, literature and the natural world. Beryl and Stephen came to Yellow Springs, Ohio to be near Beryl’s daughter, Dennie Eagleson. Beryl joined every woman’s organization in town, and was an active participant in the Unitarian Universalist Church of Dayton and the Women’s Group there. She started a readers group that she named Readers Voracious, which met monthly to discuss contemporary fiction and continued to meet for 23 years. Beryl was an avid reader all of her life, and her tastes ranged widely.

Beryl and Stephen spent summers on Loughborough Lake in Ontario in a cottage that was built by her father. She was able to be with her Canadian family, and to sink into the green-gold waters of the lake. It was a place of enduring sense of home for her, the source of her love of nature, and of endless visions of light dancing on water.

Beryl leaves behind many people who were nurtured and inspired by her, from family members and former students to colleagues and fellow seekers. She faced death fearlessly, with grace and courage and gratefulness for her full and productive life. She leaves her partner and husband, Stephen Schicker; her son, Leland Eagleson, her daughter Diane Long, her daughter Dennie Eagleson and husband Alan Greenberg; her granddaughter Ruth Freyta and husband Doug, her grandson Jack Hudson and wife Marla; and great-grandaughter Camille and great-great-grandson James; sisters Ruth Blacklock and Bernice Edmonds; and many Canadian nieces and nephews, along with many friends who hold her dearly in their hearts.

A memorial service will be held in her honor on Saturday, July 16, 2–4 p.m., at the Unitarian Universalist Fellowship of Yellow Springs. In lieu of flowers, the family asks for donations to be given to the Yellow Springs Library Association, P.O. Box 554, Yellow Springs, OH 45387. The family is grateful for the care and support of Community Mercy Hospice.