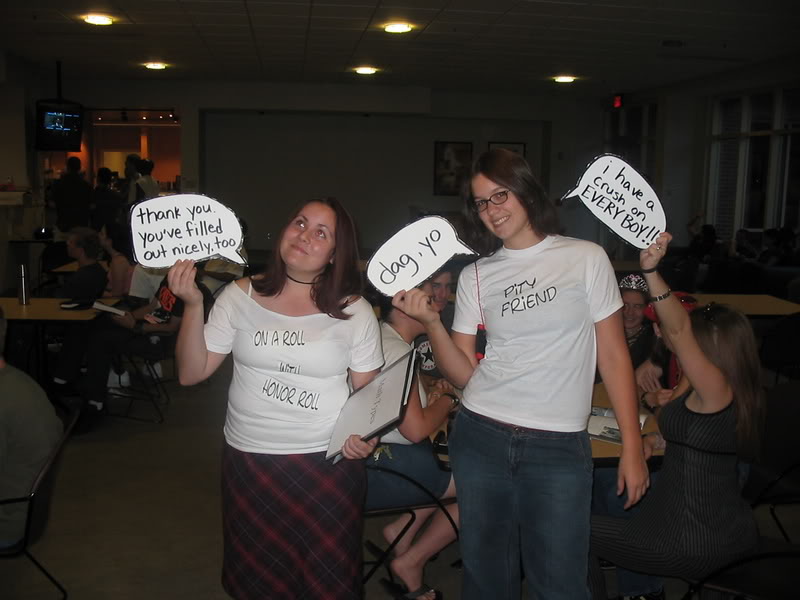 Me and Cherie at FSU, circa 2004, doing who in the heck knows what.

Let me begin by saying that I’m not one for shameless plugging.

With that said, it might be interesting to note that my best friend, Cherie Saulter, is coming to town this weekend and will be screening her debut feature-length film, No Matter What, at the Little Art on Sunday, June 26 at 1 p.m. Just to let you know.

Cherie and I became friends like this: outside the high school band room, I asked her if we could be friends. She said “yes.”

We were roommates at Florida State University, where Cherie was a BFA student in the film school. As much as film school was her experience and hers alone, I do feel it’s okay, here on my own blog, for me to steal the proverbial thunder and talk about how it involved me. Mostly, it involved me waking up 10 to 15 minutes before Cherie’s alarm would go off, usually anywhere from 2:00 to 4:00 in the morning, to make sure she heard it.  Film school, I gathered, meant doing a lot of things at a lot of weird hours for Cherie, like making panes of candy glass or stirring up saucepans of fake blood or making a piece of bread fall into a toaster in stop motion. No one really knows how hard, or how time-consuming, it really is to keep a candy window from over-baking and turning brown, to get fake blood to just the right consistency, to make the bread’s journey from fresh-baked to toast really believable, like Cherie does. I was just really good at alarm clocks.

I majored in creative writing in college. My educational experience wasn’t quite as exciting as Cherie’s; it mostly involved me eating a lot of donuts and staring out the window, and then writing stuff at the last minute. This is a trend that continues, by the way, except that now I’m too poor for donuts.

Cherie read everything I wrote. She took the first story I wrote in my first college workshop and bound it into a little book that she used to keep on the coffee table. And I saw everything that Cherie made during her time in school, and still have copies of several of her projects. She used to make me coffee at 3 a.m. when I was only half done with a story that was due in seven hours. I made up a song about a toaster for her stop motion movie. I like to think we needed each other.

I recently read a review of Cherie’s film that was translated from German. Online translators are, as yet, an imperfect product of science, and often produce funny, bizarre, or poignant results. The review’s title described the film as being about unconditional friendship in “Amerikanischen nirgendwo.”  YS News designer and resident knower-of-German Matt Minde informs me that the phrase, contextually, translates to “American wasteland.” The internet, however, translates it this way: “America Nowhere.”

Ever since reading the review, I can’t get that phrase out of my head. As absolutely corny as it sounds, it’s such an apt way to describe the world my friend and I were living in, that most of us were living in, when we were younger. We knew where we were, but we weren’t really anywhere; caught between being children and real, live adults. Sure, we wrote the checks to keep the electricity on, but then again, the money in our banks came from student loans that, only now, are we obliged to start paying back. Those were the days of fake blood and donuts, my friends; these are the days of insurance payments and baby puke.

Then again, I do still find myself singing the toaster song.

It has been my privilege to travel through America Nowhere with my friend Cherie, and I begin to suspect, with each word that I type, that we’re still making our way through.

Go see Cherie’s movie, No Matter What, at the Little Art on Sunday. There is no fake blood.

(A review of No Matter What will appear in tomorrow’s issue of the Yellow Springs News. For more information on the film, visit http://www.stayglorious.com .)

One Response to “BLOG – America Nowhere”