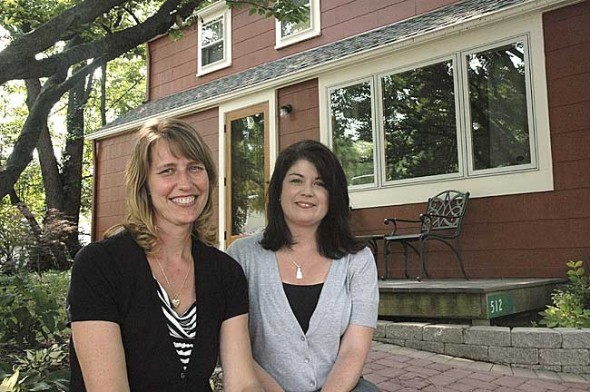 Creating families, one Adoption Link at a time

Corinne Daprano and Jodi Chaiten had been together almost 20 years when they moved from Columbus to Yellow Springs. Daprano, a professor at the University of Dayton, and Chaiten, a telecommunications salesperson, had long wanted to bring children into their family, but the time and place hadn’t been right. But after their move to Yellow Springs a few years ago, the child-friendly village seemed a good place to start a family.

A critical part of the couple’s successful adoption story is the local agency Adoption Link, headed by Naomi Ewald-Orme, who guided the couple through the complex and sometimes challenging adoption process.

Other local adoptive families who worked with Adoption Link have similar stories to tell. According to Kirk and Nan Meekin, their youngest daughter came to their family largely due to Ewald-Orme’s reputation as accessible, competent and well-organized. When a woman in an area hospital giving birth expressed interest in finding adoptive parents for her child, the hospital social worker gave the birth mother, along with several other referrals, the name of Ewald-Orme and her agency.

“As we found out from the social worker at the hospital, Naomi’s willingness to go to a hospital at any time at a moment’s notice is not a common trait among all agencies or social workers, and for us made all the difference in the world,” the Meekins wrote in an e-mail. “Also, the fact that she is organized and can quickly and accurately handle all the requirements involved was another contributing factor that led the hospital social worker to refer Naomi.”

That word-of-mouth reputation has helped Adoption Link grow. After being licensed in 2000, the agency “took off like gangbusters,” Ewald-Orme said.

Currently the agency — Ewald-Orme employs nine contract social workers in Cleveland, Columbus and Cincinnati, along with the Dayton area — places about 60 children a year with adoptive families, and all of those children are from Ohio.

While many Americans believe that newborns from this country are only rarely available to adoptive parents, or that the wait for a child takes years, the success of her agency says otherwise, Ewald-Orme believes. Children from this country who need adoptive homes are available, but the domestic adoption process involves different complexities than international adoptions. Specifically, many adoptive parents may fear involvement with the child’s birth mother in a domestic adoption, but that fear is based on inaccurate stereotypes, Ewald-Orme believes.

Negative media portrayals of birth mothers often show them as drug addicts or women with mental health issues, she said, when the reality is that most birth mothers are women between 22 and 35 who already have children, but believe that they don’t have the means to support another.

“Birth mothers are not stalkers,” Ewald-Orme said. “They are women who want the best for their children. They’re women who were strong enough to make this incredible decision, and we honor them always.”

Research has shown that adopted children do best when they have information about their birth families, which is the main reason Ewald-Orme, herself the adoptive mother of three, and her staff believe strongly in open adoption, in which the adoptive parents maintain a relationship with the birth mother, to the extent that all parties are comfortable doing so.

That relationship will vary according to the needs and comfort levels of all involved, according to Adoption Link social worker Patty Belliveau. In most cases, the adoptive family sends cards and photos to the birth mother about four times a year, and some families and birth mothers get together in person. However, if the relationship with the birth mother seems harmful to the child or family, the adoptive parents, who have full parental rights, can terminate it.

But that rarely happens, according to Belliveau.

“Most adoptive families end up loving and cherishing the birth mother,” she said.

However, the agency respects the wishes of the birth mother, and if she chooses a closed adoption, in which the adoptive family does not have information about her, then they respect that wish.

The process of adoption is always complex, with all parties involved having faced loss and/or emotional challenges. The prospective adoptive parents may have endured years of trying and failing to have children, and then made the difficult decision to adopt rather than keep trying. And the birth mother is pregnant with a child that, for whatever reason, she feels she cannot provide care for, leading to guilt and sadness.

Into this complicated picture steps Ewald-Orme, who, according to adoptive parents who worked with her, seems able to navigate the emotional needs of all, with a focus on what’s best for the child.

“The bottom line is, she’s an advocate for kids, but she’s sensitive to the birth mom and the adoptive parents and what everyone’s going through,” according to Daprano.

The adoptive process often begins with a call from a prospective birth mother, who may have recently discovered her pregnancy. Accessibility is critical, Ewald-Orme believes, and at Adoption Link, “We answer our phone 24 hours a day, and each person who calls gets a human voice on the other end.”

On the other end, adoptive parents who come to the agency fill out required paperwork and create a “life story,” a photo essay of who they are and what their life is like, to show birth mothers who are seeking a family for their yet unborn child. The couple then waits for a birth mother to select them, a process that can feel arduous. But Ewald-Orme encourages adoptive parents to remain positive.

“When adoptive parents come to us, I want them to know it’s possible,” she said. “They may have to wait, to keep trying, but if you want to parent, there are enough children in the world.”

While Adoption Link has worked mainly with opposite-sex couples, the agency welcomes same-sex couples and singles to apply as well.

Ewald-Orme doesn’t know why, exactly, adoption has been a passion in her life, but she remembers always wanting to work in the field, and to be an adoptive parent. She has a bachelors and masters in social work, and out of college worked three years for Montgomery County Children’s Services.

After her marriage, Ewald-Orme became an adoptive parent by working through an adoption agency, and learned first-hand the problems and complexities faced by adoptive parents. She was motivated to start her own agency partly due to that experience, and her sense of how the needs of adoptive parents could be better met.

Since starting her agency 10 years ago, Ewald-Orme finds herself always busy, both with work and parenting her four children. But she loves her family, and her work, and wouldn’t have it any other way.

“There are days when I’m stressed out by work, but I still feel like the luckiest person in the world,” she said.