As I mentioned in my last blog, last week my best friend Cherie brought her debut film, No Matter What, to the Little Art. I was really excited to have the chance to show what I think is an amazingly contemplative and compassionate piece of cinema to Yellow Springs.

Guys, I have never experienced the kind of anxiety that I felt while watching the film. Every creak of the seat, every rustle of the popcorn bag, every sigh or yawn or whisper. Each sound made me wonder, “Have we lost them? Do they still care?” 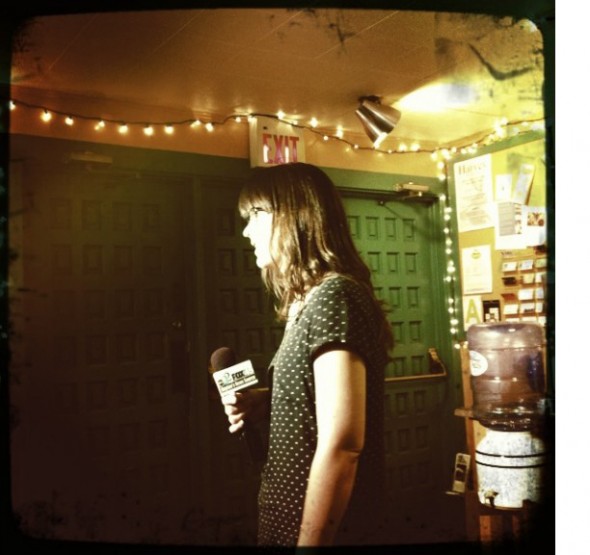 Cherie in the foyer of the Little Art, being interviewed by Channel 22.

But it turns out they did care. The screening was followed by a great conversation between Cherie and audience members, some of which have continued to talk with Cherie about the film when they’ve seen her on the street in the last week. Though I wanted to pack the house for Cherie and her amazing work, the turnout was modest. Nevertheless, I think it was a great time, and I extend heartfelt thanks to each and every person who came to support a quiet and beautiful film, made with years of hard work, of missed meals and missed sleep and most of all, an empathetic heart. I would shamelessly promote any project my friend cares to produce in the future.

While we’re on the subject of shameless promotion, I’ll just mention that my partner Anthony and I are hosting the third in our ongoing series of literary readings on Saturday, July 9, beginning at 6:30 p.m. at the YSAC Gallery. It’s free, and there’s food; that should be enough to get folks in the door. For those of you who need that extra push, there will be music from local pianist Mark DeLozier and poetry from Matt Vetter and Adrienne Cassel. A full story on the reading series will be in the upcoming issue of the Yellow Springs News.

We were interviewed for the aforementioned story yesterday, and walked down to the YSAC Gallery for photos. We were lucky to find that the gallery was open for viewing the Arts Council’s current exhibits, Debra Wilburn’s “Lizards in Love and Other Illustrations of Animal Intimacy” and Tony Powers’ “Why Are The Walls Screaming?” The artists were there as well, and Anthony, Cherie and I passed an hour or so talking with them, while Lucy, mine and Anthony’s 10-month-old daughter, crawled around, doing her best to surreptitiously eat everything she found on the ground when she knew we weren’t looking. 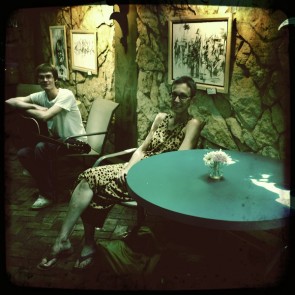 Tony Powers and Debra Wilburn in the YSAC Gallery.

Debra Wilburn talked about her black and white drawings, which depict animals in a variety of embraces. The drawings are a result of what she calls the “ambiguous embrace,” or, as she said, “when you’re not sure if animals in nature are trying to love each other or eat each other.” The exhibit, she said, illustrates the dynamic between both animals in the wild and humans interacting, and how it’s often unclear whether an interaction is kindly or maliciously meant; the “vagaries of love and romance,” she called the humorously-depicted images, with “animals as a voice.”

“I like to laugh,” she said, “no matter the circumstance.” The next circumstance, as it happened, was my infant child crawling on the hem of her dress, sending her into a hilarious somersault. “You can do as much in a dress as you can in pants,” Debra said, laughing, to Lucy, “if you want to.”

Tony Powers sat next to Debra, playing a guitar. His exhibit, a mix of drawings and paintings, contains several works that refer to or depict his experiences with synesthesia, a neurological condition that results in mixed sensations; letters and numbers, for example, a synesthete might see in particular colors, or sounds might associate themselves with certain tastes. For Tony, being a synesthete means that every sound he hears also produces a distinct, real-time image. One of the pieces, for example, is a painting of a child laughing, surrounded by colors and shapes that represent what Tony sees when he hears that particular sound. Another painting, which he described as his “least favorite” of the show, is simply the representation of what he sees when he hears a scream.

Tony was glad to sit with us in the foyer to the gallery and educate us on the life of a synesthete. “Most of us,” he said, “grow up thinking that everyone else experiences the world the way we do. A lot of times, when children with synesthesia describe what it is they’re experiencing, adults assume it’s the result of active imagination, and so kids with synesthesia learn to hide what it is they see or hear or taste.” For good reason, Tony is proud to be a synesthete, and said that creating art in general is necessary for him, but that presenting this exhibit was of special importance to him, as he hopes to be able to share as much about synesthesia with the public at large as he can.

“Everything I hear has an image,” he said. “Every time someone walks by, and everything we’re saying, in fact.” We all sat in the foyer for a little while, Tony picking at the guitar, each note producing something that only he could see. There was a lull in the conversation, while I thought of the best way to ask what I was sure was a question that Tony heard often.”

Tony laughed. “That’s absolutely the number one question I get. Everybody wants to know: ‘What does my voice look like?’”

There was another lull, and Tony went back to guitar. I didn’t ask him, and he didn’t tell.

For Tony, his own voice manifests itself in pencil and charcoal and paint. For Debra, animals in black and white. For Cherie, moving pictures on a screen. I suppose it’s up to me to decide for myself what my voice looks like.

Tony Powers and Debra Wilburn will speak about their work at the reading on Saturday, July 9, beginning at 6:30 p.m. in the YSAC Gallery. For more information, e-mail ysnews@ysnews.com .