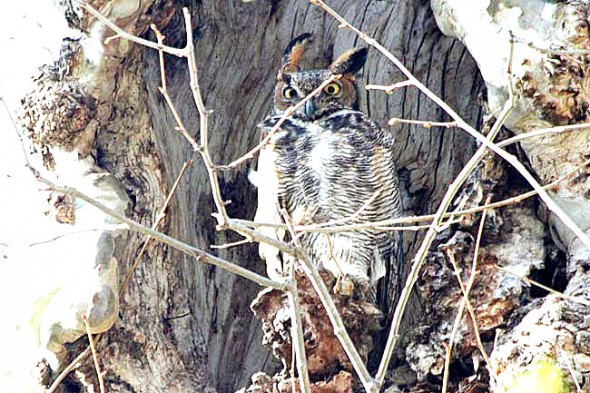 Some of the region’s top chefs will prepare a six-course meal with local foods for this weekend’s Whoo Cooks for You? fundraiser dinner for the Glen Helen Raptor Center. (Photo by Lauren Heaton)

‘Whoo Cooks For You’ for the birds

You might call it avian welfare, Social Security for the birds, funding the feathered, even banking for the beaked. Like many people, the disabled birds at the Glen Helen Raptor Center are out of a job and need support. Some are grounded temporarily, while others are permanent wards of the Glen. And while the birds do put in several hours a week, with the help of Raptor Center Director Bet Ross, educating visitors and students across the region about the beauty and importance of raptors in the natural world, the income doesn’t cover what it costs to operate their home.

If raptors can eat near the top of the food chain, surely those who support them have some right to do the same. The five celebrated chefs designing the Glen’s second annual Whoo Cooks for You? will have diners eating from the canopy this year to raise money for the Raptor Center. The event, featuring a six-course meal for locovores and old timey music from the Corn Drinkers, takes place on Sunday, Sept. 11, at the Outdoor Education Center. Tickets for $150 are still available but are limited.

While this weekend’s omnivorous guests are nibbling on the region’s finest cuisine, the birds will be enjoying their daily dose of frozen mice and voles. The price of a ticket will take care of one of the Raptor Center’s 30 resident birds for a day, or several of its 150–200 yearly itinerants, who need food, shelter, sometimes medical attention and a safe place to regain their ability to fly and perhaps survive in the wild.

The world may be a cruel place for humans, but it’s even crueller for raptors, only 20 percent of which survive their first year of life, according to Ross. For the past 40 years the Raptor Center has helped to boost that percentage by taking in hundreds of sick and wounded birds each year, rehabilitating them, and releasing about half back into the wild. Ross has led the operation for most of the last 25 years, and this past year brought new birds with new stories.

This year the Raptor Center saw a clutch of full-grown kestrels who had failed to fledge and were starving. Ross was able to save two of the four. In the spring she saw a red-shouldered hawk that had suffered head trauma in a hail storm. It was a full week before he could be released. And in January someone brought a whole box of puffy white baby owls that had fallen out of their nest. The saddest story this year was the young eagle from Eastwood Lake that flew into a power line and crashed to the ground. The large raptor suffered a broken leg and breastbone and did not survive. But Ross focuses on the bright side of that story, as she is apt to do, which resulted in DP&L’s decision to secure all the poles and power lines around the lake for the birds.

While the rehabbed birds are mostly caged in the woods away from people, the resident birds serve an educational purpose, allowing visitors to observe them up close next to informational signs about their habitat and behavior. This year’s Whoo Cook’s for You?, named after the call of the barred owl, will help build new caging to replace all of the center’s signage. The vision, according to Glen project manager Ann Simonson, is to eventually communicate the information through a smart phone application with the sound of the bird calls and links to other Web sites and other nature centers in the region.

It is one of the Glen’s goals to become more tech-savvy to increasing outreach on a tighter budget. Technology is the way to reach the younger generations, who already connect to the world through digital media every day. Simonson hopes that the digital tools will help kids dig into their interest in the Glen, and link to related sites on the Internet as well as each other to deepen their knowledge and awareness of the natural world.

“Kids want that kind of interaction, and if their experience at the Raptor Center is good, people will donate and pass on the connection to their kids and their friends,” Simonson said.

Sunday’s experience should be a memorable, and flavorful one. The meal will start with appetizers prepared by the Winds Café chefs Mary Kay Smith and Kim Korkan, a plated first course of Peruvian fish tapas by Sidebar chef Margo Blondet, and a dessert of Grand Marnier sabayon from Doug McGregor of Seasons Bistro. The Meadowlark’s Elizabeth Wiley is preparing the main course of succulent braised turkey thighs with succotash and spicy tomato salsa. Vegetarian options are available upon request. Additional courses will be prepared by Carrie Walters of Dorothy Lane Market. The event is made possible by these chefs, the Ruth B. & Thomas Mackey Charitable Trust at Schwab Charitable Fund, and Orion Organics.

The event will begin with a special tour of the Raptor Center and presentation by the center’s staff, followed by the Corn Drinkers and a drawing for a chance to win a gift certificate to each of the restaurants. To R.S.V.P., call 937-903-1762 ext. 101 or e-mail asimonson@glenhelen.org .