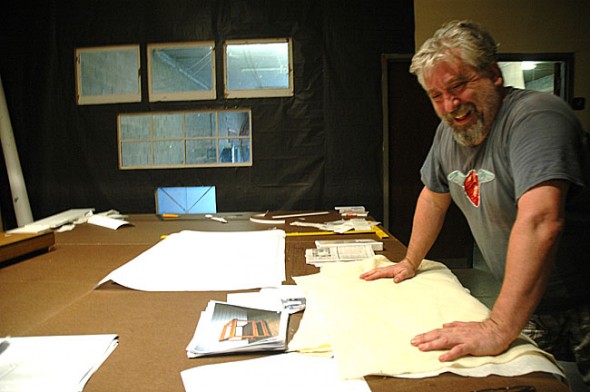 In his studio, contemporary artist Michael Casselli surveyed the handmade paper he learned to create for a recent exhibition. His current Emporium show, ‘Works on Paper,’ features seven printed images of abstracted young faces to emphasize the intangible quality of memory. It runs until Sept. 30. (Photo by Megan Bachman)

From his 5,000-square-foot studio in Millworks, Michael Casselli creates artwork that sparks and fizzes, blurs boundaries and engages all senses. His contemporary and experimental artwork can now be seen in a new exhibit at the Emporium Cafe and an electric installation along the bike path. And as if producing original work wasn’t enough, Casselli, also a leader of the Nonstop Institute of Yellow Springs, co-curator of the new Glen House Inn, and founder of a new fine art printing business, has been helping to energize the local art conversation and nurture more contemporary work.

“There’s not a lot of exposure or dialogue around the way art is going in contemporary culture,” Casselli said in a recent interview. “We want to invigorate the community a bit to create more discussion around work and more context.”

Casselli’s “Works on Paper” shows at the Emporium until Sept. 30 and his public art electric sculpture broke ground last month. Though the Emporium show will be his first local exhibit, Casselli has been busy since arriving in Yellow Springs in 2008 from New York City to help save his alma mater, Antioch College. In New York he was a large-scale sculptor, theater and dance set designer, video designer and performer with a Bessie performance award to his name.

The Emporium show is Casselli’s first foray into two-dimensional work since he was an Antioch undergraduate in the late 1980s. The seven larger-than-life images of partial young faces printed on handmade wax paper are highly textured and abstracted to make a statement about memory, Casselli said.

“The images are there but not there,” he explained. “It’s the tangible-intangible quality of memory and how it physically manifests.”

Casselli’s subjects are Dayton teens he taught in the summer of 2010 as part of a residency with the Blue Sky program, which brings artists from around the country to teach art to inner city students for two months. The images, all intense and serious gazes, were taken from films the students created about their lives. Casselli projected the images onto wax paper, took a photo, then printed them out on bleached abica pulp and flax wax paper he created from scratch with the guidance of Sarah Strong of StrongheArt Press.

The effect makes the faces blurred out and difficult to discern at first glance.

Using that process, “…I was able to expose the nature of each individual relationship, that different degrees of legibility are part of the different relationships I had with each member of the group,” Casselli wrote in his artist statement for the exhibit.

The exhibit is decidedly contemporary, as it is about the experience of looking at the work, rather than the object itself, Casselli said.

With his new high-end, 11-color printer (including four separate blacks) and some printing skills under his belt, Casselli recently started a fine art printing business in his studio. His goal with Manic Design Print is to offer local artists the capability of turning their original artwork into prints to archive and sell.

Casselli’s other new work in town is three-dimensional public art and is intended to create the illusion of danger. The installation, called Slack Wire, is an electric sculpture being erected next to the bike path across from the Antioch College campus with the permission of the Village and funding from an anonymous patron. Sixty-five feet of aircraft cables carry an electrical charge to music wires, causing sizzling sounds and dances of sparks due to the plasma created by ionized air.

Casselli said he wanted to create a piece that creates the appearance of danger, and that is attractive at the same time. The message of the work is, “If you desire something, how close are you willing to get to get it?”

At the Glen House Inn, a new art exhibit space and bed and breakfast on Grinnell Circle, Casselli is working with co-curator Luisa Bieri to bring in more experimental art, install contemporary work in a silo on the property and, eventually, to offer an artist-in-residency position. Four months of shows have already been scheduled and a new art salon interview format will provide a unique way for artists to talk about their work at an opening, Casselli said.

Casselli was mobilized to help save the college when he attended his 20-year reunion in 2007 and joined up with the Nonstop Liberal Arts Institute. Casselli designed the Nonstop space, taught a class called Stuff, taking his students through an experience of the five senses, and became a member of the executive collective, Nonstop’s leadership team. While the future of Nonstop is unclear, Casselli said it continues to offer valuable workshops and education events for the community.

“We have contributed a role to culture awareness of the village,” Casselli said, before adding— “and we threw some good parties.”

Though Yellow Springs is not the mecca of contemporary art, Casselli said he is getting more and more commissions and is grateful for such a large space in which to work.

Visit http://michaelcasselli.com for more information on his work.