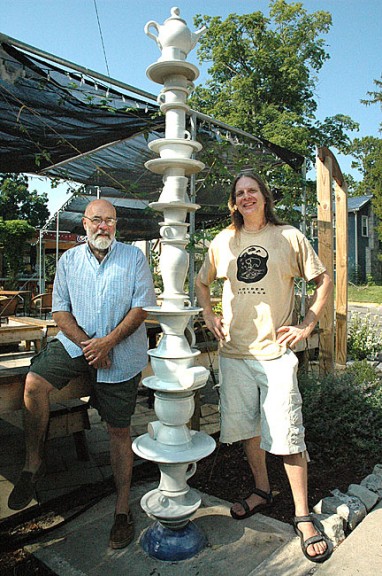 Corner Cone owner Bob Swaney, left, and local artist Bill Mischler posed recently with the sculpture that Swaney commissioned from Mischler that now stands outside the ice cream restaurant on Dayton Street. Mischler was inspired by piles of dishes stacked in his sink. (Photo by Diane Chiddister)

As an artist, Bill Mischler sees beauty where others might miss it. For instance, he’s sometimes struck by the compelling designs created by the dishes stacked up in his kitchen sink.

So when the Village sponsored a public art contest several years ago, Mischler’s first thought was a sculpture inspired by those dishes, to be placed outside a local restaurant. He remembered the way stores in the past sometimes advertised themselves with a giant object outside, like a huge shoe hanging outside a shoe repair store.

“I can imagine businesses up and down the streets in Yellow Springs having things like this,” he said.

While Mischler didn’t win the contest, he had the sculpture in mind when he and Corner Cone owner Bob Swaney chatted one evening at a local gallery opening. Intrigued, Swaney asked Mischler to show him the design. Swaney liked it, and commissioned Mischler to create the sculpture outside the Corner Cone, near the corner of Dayton and Walnut Streets.

“It’s a space that begs for something,” Swaney said recently as he stood beside the finished piece. “We answered its call.”

A reception for the public art piece and its creator will take place sometime this fall, Swaney said.

The finished sculpture, a 10-foot stack of ceramic white dishes and cups topped by a teapot, all of which appear precariously balanced, was installed on Friday, July 15, the day of Cirque Carnival.

Mischler and Swaney are pleased with the finished piece, which conveys a sense of whimsy that fits with a place where both actual children and adults feeling childlike come to eat ice cream. The lines of the dishes and cups are rounded and flowing, evoking a dreamlike quality.

“I see my work sometimes as a visible dream,” he said.

Mischler made all the plates and cups white, both to create a unified look and so the sculpture doesn’t compete with a spot already busy with traffic and people. And as well as seeing the sculpture as a playful statement about a business that uses dishes and cups, he sees it as a “little bit of a metaphor about community.”

“It speaks to me of how important each individual is, how you can’t remove any individual without affecting the whole,” he said.

The sculpture is Mischler’s first large solo ceramic piece in his career as an artist and potter. He grew up in Dayton in a family of business-oriented people who “couldn’t figure out where I came from,” he said, due to his interest in art. Against everyone’s advice, he pursued art in college, and received a degree in printmaking and sculpture from Wright State University.

Looking for a studio after he graduated from college, Mischler found the Rosewood Art Studio in Kettering to be the most affordable. There, he first discovered working with clay, and he’s been hooked on it ever since.

“Clay satisfies me on so many levels,” he said. “You can do anything with clay, sculpt it, draw on it. And I like working with my hands and getting them dirty and messy.”

In the decades since, Mischler has mainly been making pottery, and he describes his graceful forms as “organic, rounded, simple.” His creations are available in town at Brother Bear’s Coffee Shop, Village Greenery, and in the gallery at the Bryan Center Community Pottery, where he has created his pots for years. He also worked at the Antioch College studio for five years before the college closed. And Mischler participates in several art shows each year, including the Street Fair and the Glen Helen Nature Arts and Crafts Show.

As his first large piece, the sculpture presented Mischler with many challenges. He spent “hundreds of hours” on it, beginning with experimenting with designs and testing glazes. He started throwing the plates and cups for the piece in April, then trimmed and joined the separate pieces in May. Having never made an outdoor sculpture from the ground up, he had to consider how it would respond to ice and snow, so he “beefed up” the plates and cups by making them extra thick.

Still, he said, “I’m thinking of putting a winter coat on it.”

Mischler designed the sculpture to be tall “so it could be seen against the blue sky, interacting with the clouds, moon, sun and stars.”

He glazed the piece in June, then fired it in July, just in time to meet his Cirque Carnival deadline. He still worries about how the sculpture will survive the elements, he said, but “I designed it as well as I could, and now it’s the world’s.”

Mischler is happy to take a break from such a big project for a while, and is also busy with his job as a caretaker for the Colbert family. He’s grateful to the Colberts for providing him work that fits with an artist’s life, and to Bob and Sue Swaney for commissioning the public art piece. Others who earned his thanks are local potter Janet Murie, who, when a previous plan fell through, at the last minute allowed him to fire the sculpture in her kiln, and Scott MacKenzie, who helped with construction.

Most of all, he said, he’s grateful to the people of Yellow Springs for “creating a community where the arts are appreciated so much.”