In fall of 2009, my partner Anthony came home with a plastic jug full of an amber-colored liquid.

“What’s that?” I asked
“Cider.”
“You mean, like, liquor?”
“No, just regular.”
I was confused. “What, you just heat it up?”
He stared at me, slightly incredulous. “I mean, you can if you want.”
“So it already has the spices and stuff in there?”
More incredulity. “Dude, what are you talking about?”
He stared at me. I stared at him. Clearly, I was asking simple questions.
“You said it was cider,” I told him. “So if it’s not the liquor kind, it’s the hot kind, right? With the cinnamon and the oranges and the holiday cheer and all that?”
“No,” Anthony replied. “It’s just cider, man.”
“So there’s nothing in it at all?”
“Not a damn thing.”

This went on for maybe another hour or so.

For those of you who, like me, never learned the difference between apple juice and apple cider, apparently it’s just that apple cider is squished and squashed and put directly into jugs for your drinking pleasure, while juice is subjected to things like pasteurization and filterization and vacuumization and probably some standardized testing, too.

How can you tell the difference? Well, typically it’ll say on the jug. But for a more foolproof method, take the advice of perennial next-door-neighbor Ned Flanders of The Simpsons:

“If it’s clear and yella
you’ve got juice there, fella!
If it’s tangy and brown
you’re in Cider Town.”

It’s true: I am, as it happens, in Cider Town, in that I have relatively easy access to the best cider there is, in my opinion. I don’t claim to be a cider expert by any means, but in the last couple of years I’ve tasted a few, and I, along with Anthony, have found my favorites. Each fall, when the fancy strikes us, we can pop down the road to Yellow Springs’ own Peifer Orchards for a few gallons, not to mention a cup of their frozen cider and a few pounds of their honeycrisp apples for general munching. On Saturday mornings, we can also get our other favorite cider from A&M Orchards, sold by Jackson’s at the Kings Yard Farmers Market. In falls past, when Jackson’s hasn’t had cider to sell at the farmers market, we’ve made the drive out past Xenia to the Jackson’s storefront. And when they were out, we’ve happily driven more than an hour out to A&M Orchards in Midland, where I recently enjoyed a superb caramel apple on a stick; it always seems like such a hassle to engage in the eating of a caramel apple, but I have yet to regret taking that particular plunge.

And that’s how much we dig cider, you guys.

It’s hard to pick just one favorite of anything, and to be honest, I don’t think you should even try. That’s why Anthony and I have whittled our list of good ciders down to two, both of which we like for different reasons. Having both ciders in our fridge, we talked the other day about how we’ve never really had a side-by-side taste comparison of the two. So tonight, after the baby was tucked in bed, we decided to have a little tasting of our own, to pinpoint what it is we like about these ciders. (I know, it sounds cruel, right? Not sharing delicious cider with our baby daughter, whom we purport to love? Well, don’t judge us: internet sources, which are always credible, say you’re not supposed to give babies cider, because of germs or whatever. Life’s not fair, babies, and this is your first lesson.)

We sipped, and we took notes, all for your edification. Or maybe for our personal entertainment. Or because we were probably going to drink cider anyways, and there happened to be a pad of paper lying within reach. Who can say? In any case, we drank, we wrote, we have the results. 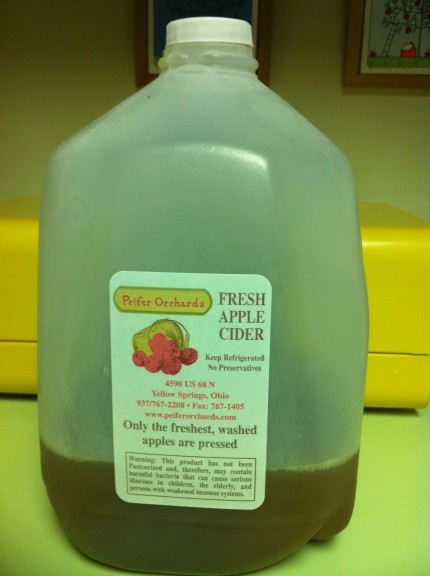 Anthony’s notes: “A definite tanginess. Almost overpoweringly so. Contributing to this is a thickness – syrupy, almost – that coats the inside of the mouth and tongue. A heavy cider. The sweetness, which is secondary to the other listed factors, is distant and doesn’t immediately present itself. The aftertaste is non-commital: not sweet or tangy, but a flat mixture of both. I get the sense that this cider would be appropriate for other manifestations, such as heated or with alcohol. As opposed to a deep or nutty brown, the color is murkier, cloudier, therefore a bit lighter, because there seems to be no base. The aroma is fairly reminiscent of apple juice. A solid, complacent smell that attracts without frightening.”

Lauren’s notes: “Tangy at first, then very sweet. Thick; flavor spreads to the edges of the tongue. Tangy is the stronger of the two notions. Strong bite. Would be good with spices.” 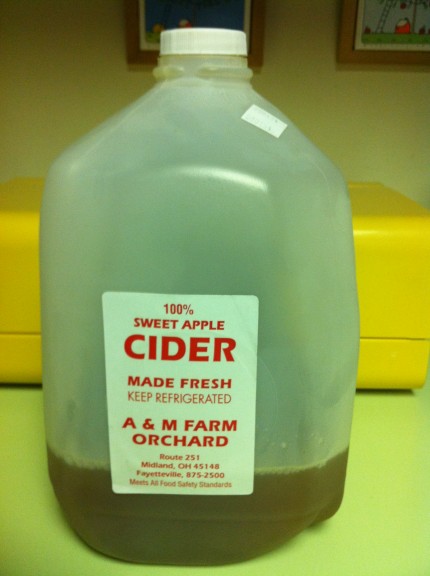 Anthony’s notes: “Hard to approach, hard to classify. Takes slightly long to reach or activate the palate. Subtle in its approach. Not so tangy. The biting sweetness dominates without a counter-element to balance it out. Smooth and thing. Lays on the tongue as opposed to strangling it. A much lighter cider. Aftertaste is negligible; cider ripens in the mouth, but after swallowing, disappears quickly. The color is a consistent gold. Dull honey. The aroma is much more pungent than the taste would indicate. Aggressive and tangy odor.”

Lauren’s notes: “First taste is precisely like biting into a sweet apple. Refreshing and thin. Not overly sweet. Minimal tanginess, though it seems to build with each sip.” 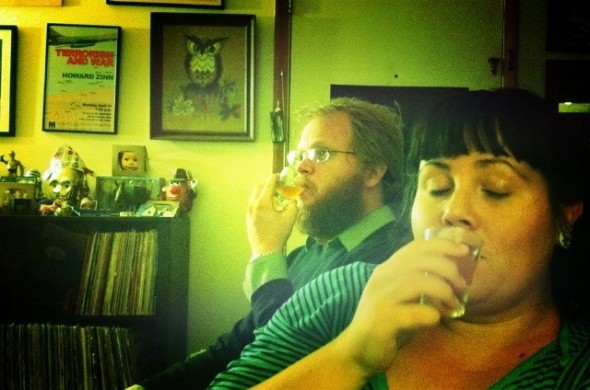 Anthony’s notes, as you have no doubt noticed, are a good deal more detailed than mine, possibly because his sense of taste has not been ruined over the years by frequent indulgence in Vanilla Coke and Flamin’ Hot Cheetos. After we finished our notes, we compared them, remarking that our assessments seemed to be pretty much on par with one another. I told Anthony that I, too, had thought, as I was tasting it, that the first cider would be good served hot, but had not written it down, and that I was going to add it to my notes. Anthony maintained that it would lessen the integrity of the experiment if I were to add to my notes after reading his. I maintained that it’s my blog and I can add whatever I want, so stop being such a nerd.

I lied, earlier, when I said you shouldn’t pick one favorite, and that we had not done so. Each of these ciders has its special qualities, and each should be enjoyed in different ways, but we actually chose our favorite two years ago.

Well, that’s a secret we’re willing to keep. For now, I suggest you go out and try both, and form your own educated guess.