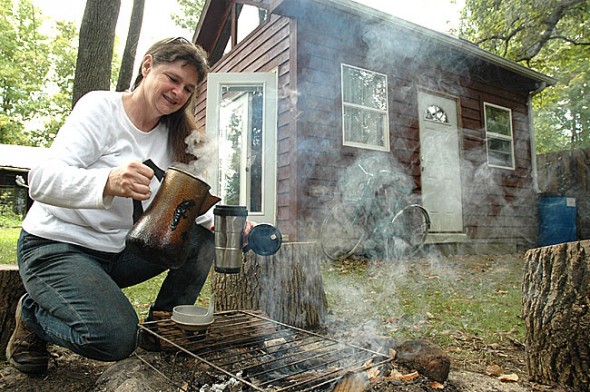 Ellen Dawson-Witt prepared tea in front of her 192-square foot off-the-grid cabin, in which she lived for one-and-a-half years. Dawson-Witt leads a seven-week course on “Choices for Sustainable Living” starting Tuesday, Oct. 1, at 7 p.m. (Photo by Megan Bachman)

Living tiny, in line with values

When Ellen Dawson-Witt wanted to live a more sustainable life, she didn’t take half-measures. She moved to a farm, went off the grid, and downsized to a house the size of a shed.

Fitting her life into 192 square feet was easy for the 56-year-old — she long ago eschewed television and fashion, and got rid of the stuff she didn’t use — and so was living on a farm in exchange for taking care of the goats. And she didn’t mind carrying water, using a composting toilet, keeping a wood stove going and lighting oil lamps in the off-the-grid structure that lacked indoor plumbing and a furnace.

The only difficulty for Dawson-Witt is that the tiny house that allowed her to live her values for one-and-a-half years is no longer her full-time dwelling.

“It doesn’t feel like going without [modern conveniences], it feels like getting away from,” said Dawson-Witt, who now stays in her small home a couple of nights each week. “I don’t know why anyone would need anything more.”

In a seven-week course on sustainable living starting next week at the tiny house on North High Street, Dawson-Witt will lead discussions on voluntary simplicity, ecology, food, money and more for those who want to live more lightly on the earth. Her example, along with weekly readings, might help others change how they live, even though she cautions against a one-size-fits-all approach.

“I wanted to show that [living in a tiny house] isn’t a horrible inconvenience,” said Dawson-Witt, who also consults with people who want to simplify and organize their lives. “What’s right for me might not be right for you. I’m just one person doing it and loving it.”

The Northwest Earth Institute course “Choices for Sustainable Living” starts on Tuesday, Oct. 4, at 7 p.m. Those interested in the course, or her simple-living consultancy “Simplicity” should call Dawson-Witt at 389-2030.

Dawson-Witt’s adventure in tiny-house living began several years ago when she downsized from the 864-square foot Yellow Springs home in which she raised her two children to the 16-foot-by-12-foot insulated, wood-frame structure she designed.

A freelance editor who also works part-time for a government contractor editing EPA reports, Dawson-Witt wanted to follow in the footsteps of transcendentalist Henry David Thoreau and to prioritize people over stuff.

In the words of Thoreau, Dawson-Witt wanted to “live deliberately” and “front only the essential facts of life.” Compared to Thoreau’s 19th-century cabin in the woods on Walden pond, which was 150 square feet, Dawson-Witt’s is slightly larger, but the goal was the same.

“I wanted to live deliberately and to not be on automatic pilot,” she said. “I wanted to be connected to the elements.”

So she raised some of her food, carried the water she used for bathing and cooking from a nearby well, collected rainwater from her roof for washing, composted her waste and split wood for her wood stove. There were some modern amenities too — three solar panels, which provided some electricity for a lamp, CD player and laptop, and a 1934 gas range for cooking.

“It was fully living in line with my values,” Dawson-Witt said. “I like to know where my food comes from; I like to be in literal touch with the elements and to work with other people.”

On the farm, located outside of Lawrenceville near Springfield, Dawson-Witt helped bake bread to sell at a farmers’ market, took care of the goats and chickens and tended a small garden, in exchange for living on the property. To Dawson-Witt, it was a choice between “carrying water or carrying a mortgage,” and the answer was simple.

But when her arrangement at the farm ended and Dawson-Witt moved the tiny house, in pieces, back to the property she owns in Yellow Springs, she found that she could no longer live there full-time because the Greene County building code required indoor plumbing. Today Dawson-Witt travels between her tiny house and Kettering, where she is closer to her job. Her degree in intercultural communication comes in handy as she commutes between her simple, small-town life in Yellow Springs and suburbia, she said. She hopes to offer a “Choices for Sustainability” course in Kettering this winter.

Far from feeling deprived by her simple existence and few possessions, Dawson-Witt finds that she has more time for friends and family, and for traveling (which she also does lightly). While many people spend much of their time working so they can buy, maintain and store increasing amounts of “stuff,” Dawson-Witt lives the motto of the Center for the New American Dream — “more fun, less stuff.”

“You don’t spend time on doing things you don’t want to do,” she said of her simple lifestyle. “I’m an extrovert—I’d rather spend my time with people.”

Furnishings in the tiny house are simple. There are three chairs, one table, one desk, a kitchen cabinet from the 1920s, one bookcase, a loft with one bed and one small chest that contains an extra blanket. About 75 percent of all she owns fits in the tiny house. (Ironically, she has a whole shelf of books on voluntary simplicity, she said.) She has her clothes and a file drawer in Kettering and her tools and camping gear in a nearby shed.

With her simplicity consultancy, Dawson-Witt helps people comb through what they own and give away things they don’t use or love to those who might need them.

“There are people who don’t have the basics and we have extra,” Dawson-Witt said.

Dawson-Witt first was introduced to voluntary simplicity when Eric Lang brought the first Northwest Earth Institute courses from Portland, Oregon to the Village in 1995. Local non-profit Community Service, Inc. initially hosted the courses. Dawson-Witt has since facilitated four Northwest Earth Institute courses on simplicity, including one this spring, plus courses on deep ecology, sustainable food, and discovering a sense of place. It is her third time leading “Choices for Sustainability” and she said that while she convenes the courses, much of the learning comes from the course participants.

Whether those who go through the course decide to share their possessions or build a tiny house of their own, becoming aware of what they own and how much time and money it costs is important, she said.

“It’s not an all-or-nothing thing,” Dawson-Witt said. “The key is to think about it and to make deliberate choices.”

Dawson-Witt simply wants to live her solution to the environmental problems she’s concerned about, not preach her solution to others. Her example continues to instruct, and intrigue, others.

“People want to know why I’m having so much fun,” she said.

One Response to “Living tiny, in line with values”