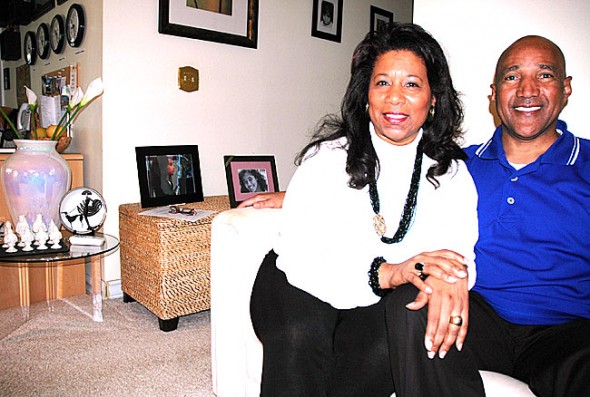 Jalyn and Steve Roe are holding an Inclusion Round Table Forum on Raising Cultural Intelligence on Saturday, Nov. 9, from 9 a.m. to 3 p.m. at the Glen Helen Building. The event is sponsored by the couple’s management consulting business, the Jael Group. (Photo by Diane Chiddister)

Event to teach benefits of diversity

Jalyn and Steve Roe like to tell the story of the time that General Motors thought it was pursuing an innovative approach to cost-cutting. The huge manufacturing company placed 8-foot banners throughout its executive offices, offering a cash prize for anyone who came up with a way to save $2 million. And someone did — the janitor who cleaned the offices.

But while the GM story had an inclusive ending, the Roes point out that the huge manufacturing company actually was not inclusive intially, making the mistake made by most companies in assuming that only higher-up employees might have good ideas. The Roes, the principals of the Jael Group, a diversity and inclusion consulting firm with 35 years experience, aim to change that assumption, and help business leaders discover how to take full advantage of a diverse work force.

“We help companies embrace cultural differences and harness workforce inclusion to gain a competitive edge,” according to the Jael Group press release.

Toward that end, the Jael Group is holding an Inclusion Round Table Forum on Raising Cultural Intelligence on Saturday, Nov. 9, from 9 a.m. to 3 p.m. at the Glen Helen Building. The event is suited for those “who are 21st century thinkers and recognize the future success of their companies depends in part on tapping into the creativity and unique perspective of an inclusive workforce.”

“This is an opportunity for those innovative thinkers to get the tools they need to take the next step,” Steve Roe said.

The event costs $199 per person, although team rates are available and those who register before the end of October will get a discount. To do so, contact the Roes at 937-319-6032, or online at thejaelgroup@gmail.com.

The event is designed to help participants have the “courageous conversations” necessary and identify the best practices needed to “monitor, measure, and reward inclusion behaviors within an organization that will bring a greater return on investment,” according to a Jael Group press release. Breakout sessions that day will include ones on increasing employee retention, enthusiasm and allegiance; including white males in diversity dialogue; learning to see things from a novel and unique perspective; and understanding the value of each employee.

While a greater number of companies, spurred by federal initiatives, are hiring a more diverse workforce, most business leaders still have blinders on when assessing the resources that diversity brings to their business, the Roes believe. Those who work on an assembly line or cleaning offices “know the product, the company and may have effective ideas about how to position the product” for greater market exposure, Steve Roe said.

But hearing those ideas may be hampered by the cultural differences that keep people from feeling comfortable with each other, the Roes said. For instance, African-American males and those from Middle Eastern cultures often speak more loudly and forcefully than other Americans, and can be perceived as aggressive and threatening.

“Maybe you’re not interested in hearing that message in that wrapper,” Steve Roe said.

In their workshop, the Roes attempt to work with people to understand the assumptions they bring to interpersonal communication, including stereotypes about ethnic groups and cultures different than their own. Once they have greater insight into their own barriers to effective communication, people can hear each other more clearly.

And that doesn’t mean that everyone will finally agree, Steve Roe said. Rather, the Jael Group seeks the outcome of helping people understand the content of what others are saying, and the value of those ideas to the speakers.

“Companies begin to have less turnover, and employees become champions for the company,” she said. “That’s when it gets exciting, when everyone wants to ­contribute.”

The current economic downturn makes their inclusion strategies even more timely, Steve Roe believes, because cost-cutting measures require that companies “use what they have” to maximum benfit.

“I think the recession makes this more necessary than ever,” he said.

Yellow Springs is the perfect place for a forum on inclusion, according to Jalyn Roe, who grew up here. Her parents, Maxine and Jacob Jones, owned the Party Pantry downtown, along with a Cassano’s Pizza franchise. Her father made a practice of hiring Antioch College students from different cultures, she said, as he believed that those from different backgrounds brought new ideas.

And she herself benefitted from a small town where all people were valued.

“Growing up in Yellow Springs, my parents made me feel there was nothing I couldn’t do,” she said. “And the nurturing of the whole village helped make it so.”

After marrying Steve, who grew up in Springfield, the Roes moved to California, where they began their management consulting business. They returned to Yellow Springs eight years ago, and now live in the same house Jalyn Roe’s grandparents owned on Livermore Street, two houses down from her mother. The Jones family has lived in the village for six generations, since her great grandfather, Fielding Dunbar, came here 18 years after gaining his freedom from slavery.

And the Roes are also passionate about their work. They believe strongly that helping people overcome communication barriers at work will also help them do so when they come home.

“It’s so important that we learn how to communicate with each other,” Jalyn Roe said.