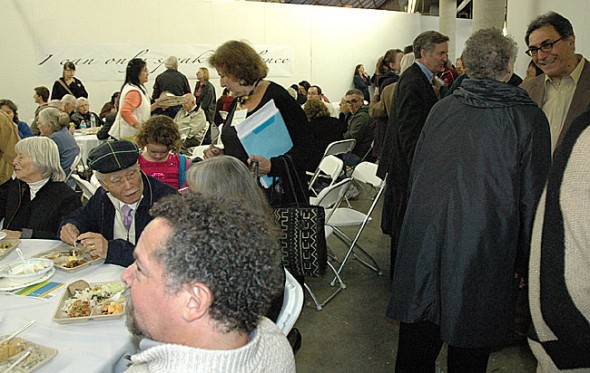 Several hundred villagers and Antioch College community members came together for a potluck dinner last Friday evening at the college’s art building. Shown above are, bottom left, major gift officer Eric Miller, with alumni board member Karen Mulhauser of Washington, D.C. standing behind. At far right, Vice President of Academic Affairs Hassan Rahmanian talks with board of trustees member Fran Horowitz of New York City; standing behind is President Mark Roosevelt. After the potluck, a large group moved to Herndon Gallery, where President Roosevelt gave an update on the college’s progress. (Photo by Diane Chiddister)

The past few months have been hopeful ones for the Antioch College community, according to President Mark Roosevelt in an update Friday, Oct. 21, to Yellow Springers and college faculty, staff, students, alumni and trustees.

“It’s been a wonderful couple of months. Walking around, you can feel the optimism,” Roosevelt said to an overflow crowd at the Herndon Gallery. Before Roosevelt’s talk, hundreds of villagers and college community members shared a potluck dinner at the college art building. The events coincided with meetings of the college’s alumni board and board of trustees.

The hopefulness on campus is linked to the number 35, Roosevelt said on Friday: the college’s first class, now on campus, is comprised of 35 young people, and the college recently received a check for $35 million, from its sale of YSI Incorporated stock following YSI’s acquisition by the global company ITT.

However, Roosevelt emphasized that the college’s main challenge remains finding an economically sustainable model for operating the college, which will require a budget of $27 million over the next three years.

“We don’t have answers yet” as to how to create that model, Roosevelt said, stating, “That is the big work ahead of us.”

At the close of the trustees’ meeting on Sunday, Oct. 23, the college announced that the trustees authorized college leaders to move ahead with plans to renovate North Hall, one of the three original buildings on campus, as a dormitory. The renovation will cost about $5.4 million, according to a press release.

“If we are successful in reaching our recruiting goal next year — and we think we will be — we will not have enough beds in Birch to house all our new students,” Roosevelt said in the statement. “Restoring one of our original campus buildings would also be an incredibly important symbolic win for us as we continue to rebuild Antioch College.”

The college aims next year to add 75 students to its current group of 35, Roosevelt has said.

The revived college is grounded on two “critical beliefs,” Roosevelt said in his address. The first belief is that the “world is increasingly interconnected,” a belief that means all Antioch College students will be required to speak a second language by graduation. Along with Spanish, this year Antioch is offering French and ­Japanese.

The second grounding belief, and the focus of part of the college’s new curriculum, is that, “We begin with the premise that the way we live in America today is not sustainable,” he said. “Antioch is a place where students and faculty come together to discover new and better ways of living.”

The specific area of food production has emerged as a sustainability focus, Roosevelt said. Partly that emphasis is linked to Antioch’s farmbelt location, and partly to the intellectual freedom inherent in the college’s independence, allowing Antioch to examine the food industry critically, in a way not available to colleges and universities funded by that industry.

“We have learned that there is a niche here for us,” Roosevelt said. “The places that have the intellectual freedom to address issues around food honestly are few. We’re going to go at it full-bore and honestly.”

Along with the newly created Antioch College Farm, the college is emphasizing sustainability in its global seminars, the first of which addresses the topic of water, Roosevelt said. Later seminars will address food, health, energy and governance issues.

While Antioch College will maintain its traditional three-pronged educational model of co-op, classroom and community, students and faculty are working together to refine the revived college’s mission.

“The process is ongoing,” Roosevelt said of the college’s new mission, stating that students and faculty “are beginning to grapple with the structures to help us move forward.”

A great deal is being asked of the first class of students to attend the revived Antioch, according to Roosevelt.

“They are here to help re-invent one of America’s great colleges. It’s a significant burden for 19 to 20 year olds, but they are up to it.”

Along with seeking first-year students with the ability to do demanding academic work, the college sought students with “grit — the perseverance to overcome obstacles,” Roosevelt said. “These students are both smart and gritty.”

Interest from potential students appears to be high, and the college has received 1,200 inquiries so far this year, compared to 800 inquiries received last year.

All liberal arts colleges are struggling with the escalating cost to educate students, which now reaches $90,000 at some schools, Roosevelt said. Most have been required to offer far higher financial aid packages than in the past, he said, citing the average tuition discount at the Great Lakes College Association schools, of which Antioch is one, as 55 percent.

To help meet the $27 million goal for operating the college over the next three years, the trustees have pledged $9 million, or about $750,000 each. Over that period the college is also able to draw down about $4.5 million from its endowment, and will receive about $1.8 million annually from its annual fund.

However, that leaves a gap of about $2 million this year and $3 million each for the following two years.

“We need to find new givers to match that,” Roosevelt said.

Most importantly, the college needs to develop a new sustainable economic model, he said. One possible approach to sustainability is building community housing on campus, Roosevelt said in response to a question, stating that marketing itself as a wellness destination is “a rich opportunity for the village.” Another possibility is marketing Antioch’s co-op strategies, since “our co-op program is the best in the country,” he said.

Both of these ideas are only in very preliminary stages, Roosevelt emphasized, stating that, “We need to think entrepreneurially.”

Whatever the approach, the college and community “are in this together,” he stated, saying, “Please, stick with us, folks.”

Meeting the college’s significant challenges in coming years will require the same persistance in leaders that the college seeks in its students, Roosevelt said.

‘“We asked our students to exhibit grit,” he said. “We will exhibit that ourselves.”