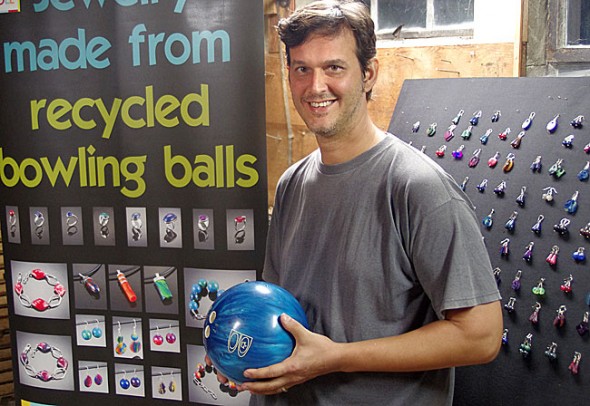 New village resident Matt Cole makes jewelry from bowling balls, and sells his work at craft fairs. He and his family moved here recently from Bali. (Photo by Sehvilla Mann)

Even those who only occasionally set foot in a bowling alley have likely noticed those particular bowing balls that distinguish themselves with bright, eye-catching patterns. Some may even find them reminiscent of semi-precious stones. Yet who takes this observation to the next logical step?

That is, asks Matt Cole, “Who in their right mind would think to make jewelry out of bowling balls?”

It’s a rhetorical question, since Cole has spent the last several years doing just that — using the decorative outer shells of bowling balls to make bracelets, rings and earrings. Whether he’s in his right mind or not, he has enjoyed considerable success selling the pieces in a variety of venues.

Cole, originally from Detroit, started bowling at age 6; he has also spent much of the last 13 years overseas, first in Taiwan (where he met his wife, also an American) but mainly in Bali, Indonesia. It was there that he learned how to silversmith, honing his skills for a dozen years.

Then, “Four or five years ago the cost of precious metals began to spike, and with the condition of the economy, most businesses in the jewelry trade began to suffer,” Cole said in an e-mail. “I’ve long looked at bowling balls and thought they could be cut apart, shaped, and set as if they were stones. I found myself with more and more time on my hands, and I decided to give my bowling-ball jewelry idea a try.”

He experimented for about year until he finally went “all in” after having received considerable positive feedback.

Thanks to Cole, numerous bowling balls are now “getting a second life as jewelry,” he said in a recent interview at his home in Yellow Springs. He has made his home in the Village since April, when he and his family returned to the United States; they were drawn to the village through Cole’s friendship with Lee Kibblewhite, owner of Asanda Imports, whom he met in Indonesia.

For Cole’s craft, it helps that the starting material is available in abundance.

“There are an enormous number of bowling balls,” said Cole. “Every avid bowler buys [at least] three balls in a season.”

The lifespan of a bowling ball is about 700 games or so, after which time there’s” little you can do with it, and so they sit in the garages and closets of bowlers until the day comes when they’re thrown ‘away,” Cole wrote in an e-mail.

He had 30 of them already sitting in his basement before he left for Taiwan; now he collects excess balls — defective ones, for example — from three Midwestern distributors.

A bowling ball consists of a core surrounded by filler material, which is in turn encased by a polyurethane skin, usually only about half-an-inch thick; that is the layer Cole uses. The plastic-encased bowling ball has been the norm only since the mid-1980s; before that, bowling balls were made from hard rubber, which, said Cole, “smells awful” when cut and makes for poor jewelry. Among the polyurethane balls, those well-suited to his work tend to have “nice striations and swirly colors,” or at least some sparkle to them.

People sometimes ask Cole if he drops the balls off his house to break them into pieces, but his actual method is less dramatic and probably safer – and also more effective.

“They will never break so they have to be cut in half,” he wrote. He uses a radial arm saw to “cut the sphere into eighths, and then remove the interior part of the ball (the filler material) from the shell of the ball.”

“I end up with a triangle-shaped piece of the shell about five-by-five-by-five inches. I can then cut this piece different ways to make different shapes for the jewelry…only simple lapidary skills and tools are required,” he wrote.

Cole has rows of earrings set up on a display board at his home. Shaped into teardrops, spheres and triangles, with no trace of their original context, the polished fragments look like precious stones from another world. (Only their lightness gives away that they are not stone but plastic.)

Cole said he’s had a great response to his “totally original” concept.

“I never get declined or refused for shows I want to be a part of,” he said. He has attended a number of selective art events, as well as craft and street fairs within a “six-mile driving radius” (the distance within which he prefers to stay) around Yellow Springs, in the last few months. They represent one of his most major opportunities for making contact with potential customers. (He also sells his jewelry at his Web site, http://www.matt-cole.com, though not currently through any local stores.)

Those who stop to visit his booth and sometimes buy a piece or two are “attracted by the uniqueness” of the work.

“After all, who’s not going to like the idea?” he asked.

Some customers are bowlers, or former bowlers, who tell Cole of the leagues they played with decades ago.

“But I think most of them just like the idea,” he said. “The people that buy my jewelry are punk-rock girls, teenybopper girls, hippie chicks, grandmothers.” In other words, the aesthetic seems to have a wide appeal.

While Cole introduced his work during a surge of interest in “up-cycled” goods, he pointed out that his concept predates this recent development.

“I benefit from that trend, but I didn’t set out to serve that market,” he said.

On several occasions, individuals have asked him to fashion a piece of jewelry out of a bowling ball to which they have a particular attachment. Cole said whether he is able and willing to do this depends somewhat on the ball in question; before a person pays to have one shipped to him, he asks that the interested party submit a picture of the bowling ball through his Web site so he can determine the feasibility of the request.

In recent months Cole showed his jewelry at events in Dayton, Detroit and Lexington, Kentucky. He has yet to determine his winter schedule, but does plan to keep showing jewelry regularly.

“This is my occupation now,” he said, but he added that, as he enjoys his role as a “househusband,” he takes care to leave time for his family. He also wants to spend some time with whole, unsliced bowling balls, using them for their original purpose: knocking down pins at the end of a lane.