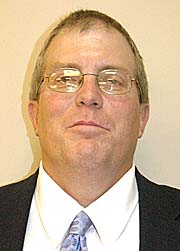 Mark Cundiff will leave his position at the Village for a similar post in Sidney, OH. (News file photo)

Village Manager Mark Cundiff will be leaving his position in Yellow Springs to take the job of city manager in Sidney.

At the Monday, Dec. 19 Village Council meeting, Cundiff read his resignation letter to Council, stating that he was giving his 60-day notice, and his last day on the job will be Friday, Feb. 17. He thanked Council and also Village staff, stating, “I’m proud of them and all they’ve accomplished during my tenure.”

In an interview last Friday, after Cundiff and Sidney leaders reached a tentative agreement on his new position, he emphasized that he was not leaving Yellow Springs due to dissatisfaction with his current job.

“This was literally the one job that I had considered applying for. It was my dream job,” Cundiff said of his family’s attachment to Sidney, where he previously worked. “We feel like we’re going home.”

In his third year as Village manager, Cundiff has been credited by Council with having a strong work ethic and organizational skills that allowed them to tackle a large number of projects during his tenure.

“Many thanks to Mark for his hard work,” Council President Judith Hempfling said at the Monday meeting. “I’m sorry to see him go.”

Following an executive session Monday night, Council agreed to postpone the current search for a Village assistant manager until a new manager is on board. While Council originally intended that Cundiff hire the assistant manager before he left, the process had taken longer than expected, and it makes sense to wait so that the new manager can make the choice, Hempfling said.

Holding off on the assistant manager search means that current Village Assistant Planner Ed Amrhein and Economic Sustainability Coordinator Sarah Wildman will continue working until further notice. Before Cundiff announced he was leaving, Council had approved a Village restructuring plan that eliminated those jobs at the end of this year, and added the assistant manager position, to provide more support for the manager. While Council plans to follow through with the restructuring after the hiring of the new manager, it’s important to keep Amrhein and Wildman in place “in order to keep things stable,” Hempfling said Tuesday morning.

Council’s first priority now is hiring an interim Village manager, which they plan to accomplish “as soon as possible,” Hempfling said. Council will be assisted in that search by former Interim Manager John Weithofer and Village Solicitor John Chambers, who as former municipal managers have many area contacts.

In an interview last week, Cundiff said that besides a day before Christmas, he does not plan to take vacation before he leaves, as he wants to finish work on several projects.

“I want to see the budget adopted,” he said. “I plan on working until I go out the door.”

Cundiff and Council members have had initial discussions on the 2012 budget, which they plan to return to in January, before they vote on the budget in February.

Cundiff came to Yellow Springs from Troy, Ohio, where he was planning director, and he has worked in a variety of municipalities, including Sidney, where for nine years until 1998, he served in a variety of positions, including assistant manager. Although they have been away from Sidney for 13 years, the family had put down roots in Sidney, where they had lived longer than any other place, Cundiff said last week.

Cundiff’s move comes at a time of considerable transition for Village government. Along with Cundiff’s departure, the hiring of a new assistant Village manager, and the future departures of Amrhein and Wildman, Police Chief John Grote will retire at the end of April. In an interview last week, Hempfling said the Village plans to hire an interim police chief before Grote leaves, so that the new Village manager can hire the new permanent chief.

“A lot is changing all at once,” she said. “We’ll go forward and be fine.”

In an interview Cundiff said that he will give Yellow Springs a good review to any potential manager candidates.

“This is a great community, and if people contact me, I’ll tell them that,” he said. “This Council has been good to work with. We had a good relationship.”

Cundiff had advised Council to re-structure Village staff to add the assistant manager position last summer, after he was asked for suggestions on how to make his job more sustainable. At the time, Cundiff said he had no back-up for his position, which limited his ability to take time off, and also that he had oversight over too many departments. Cundiff alerted Council that he was in the running for the Sidney job before they voted on the re-structuring, but they chose to go ahead.

In other Dec. 19 Council business:

• Council unanimously gave final approval to the adoption of a new fire code for the Village. The new code is based on a recent fire code update, rather than the current code, which is based on a 1997 code, Cundiff said.

• Council unanimously approved an emergency ordinance for year-end supplemental budget appropriations, which had an overall reduction of $1,239,591 for the 2011 Village budget. The reductions were mainly due to capital projects that have been postponed, according to Finance Director Sharon Potter.

• Council unanimously approved a temporary operating budget for the first three months of 2012.

• Council unanimously approved ordinances amending membership and quorum requirements for the Village Energy Board and Environmental Commission. The changes were made so the board and commission could take actions more efficiently.

• In his manager’s report, Cundiff reported that the schedule for infrastructure construction of the Center for Business and Education, or CBE, will be delayed due to design questions from the Ohio Department of Transportation, or ODOT. While Village leaders had hoped construction might begin in the summer of 2012, it now appears that bidding will begin in early spring 2013, he said.

• Council’s next regular meeting is Tuesday, January 3, at 7 p.m. in Council chambers.