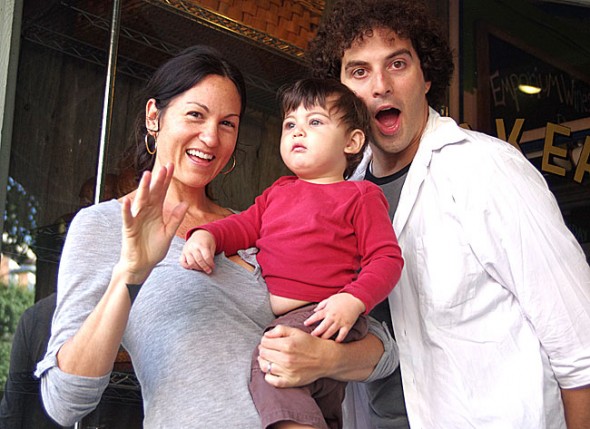 Randi and Joel Levinson, shown with their son, Mortimer, moved to the village from Los Angeles, after discovering Yellow Springs on a visit. Randi is a family therapist and Joel wins online video comedy contests. (Photo by Sehvilla Mann)

One family’s path to the village

Joel and Randi Levinson did not have to move to Yellow Springs; in fact, until they visited the village earlier this year, they were not necessarily planning to leave their home in Los Angeles at all. When they came for a visit, though, they felt this was just the place for them and their toddler son, Mortimer (“Morti” for short). Now several months into life here, they have already developed a few routines, reached out to community members and begun the process of establishing themselves here permanently.

Neither is a stranger to the Midwest or even the Miami Valley: Randi is from Chicago, and Joel grew up in Dayton, where his parents still live. Still, both had been longtime California residents when they made a visit to Yellow Springs last spring.

“After three days of being here, we realized how much we loved it here,” said Randi in an interview at the Emporium, where the family now eats breakfast “almost every day.”

“I felt like I could breathe here,” she said. “The way that people live here, it feels like this is how human beings are supposed to live with each other. It just felt like a very human place to live and a special place to raise a child.”

One difference Randi noticed when comparing Yellow Springs to Los Angeles was the source of people’s creativity.

“In L.A. it felt like people were creating to be recognized and get noticed. Here I feel like people are creating because it’s in their blood,” she said. So many villagers are working on “a million different projects in lots of fields…it’s amazing.”

The couple moved in June, or at least began the process of transitioning to Yellow Springs (“Everything is still in storage,” they said). They are currently borrowing a house from a friend.

In making the sudden decision to relocate, it helped, said Joel, that “with my job I can go anywhere.” He and his brother, Stephen, are a comedy-writing team, and they are currently pitching a couple of animated shows, one aimed at children and one at adults, to “low-level cable stations.”

“We’re just starting with it,” he said. “It won’t be the next American Idol…The hope is to get something on late-night Cartoon Network…we’ll see.”

Of course, like many writers, he also has a bread-and-butter job — perhaps a surprising one. “I win online video contests for a living,” said Joel.

The work gives him an opportunity to explore short-form comedy, he said.

Joel has enjoyed considerable success with this work since he “fell into it” after winning a contest two years ago. According to him, the opportunity is considerable.

“At any given time there’s 160 or so video contests online,” he said. He focuses on the ones that best suit his talents and spreads the word about others as a way to build community.

For instance, Yellow Springs made a fine locale for a recent video for Jansport backpacks, he said. “They wanted to see something about the outdoors,” so he shot video in the Glen and his current backyard on West North College Street, which he “populated” with villagers. (Randi and Mortimer are in 80 percent of the videos, he added.)

It was Joel’s comedy Web videos that brought him and Randi together. About three years ago she watched a few and left a comment on the Web site about how funny they were. He found a pretext for visiting, and things went from there.

Like Joel, Randi sees bright prospects for practicing her profession: clinical psychology, with a focus on marriage and family therapy. In Los Angeles, she said, “I almost felt like there wasn’t a lot of opportunity even though it was so big. When we moved here I felt a lot of encouragement from therapists in the community.”

Randi said she hesitated to compete with those already established here, but they dispelled her concerns. In California she had been working on her doctorate in psychology, and will likely transfer to one of the area universities to eventually finish her dissertation, she said.

While the Levinsons have great enthusiasm for their new home, the Midwestern winter is something they could live without.

“We’re easing into it,” said Joel; this year they will escape it in part, spending December in Los Angeles and January in Thailand. “Northern Thailand,” specified Randi, who said it  actually turns quite cold there in the winter (a qualification which only does so much to diffuse one’s envy). Meanwhile they have also been enjoying excursions around the area.

“In an hour we can go see our friends in Dayton or Columbus; an hour in LA gets you six miles,” Randi said.

After they return in February they plan to face the issue of “making a settlement” in Yellow Springs. “We are open to what it’s going to look like,” said Joel, adding that they hope to find a house to rent on a longer-term basis.

The couple is eager to make more connections with people in the community. Joel said he would like to find others interested in playing pick-up basketball and soccer, and some puppeteers for certain video projects. Randi would “really like to start meeting other therapists [and people] interested in doing some relationship workshops [and] some group therapy.”

“It’s just wide open. We feel like we could do anything,” she said.