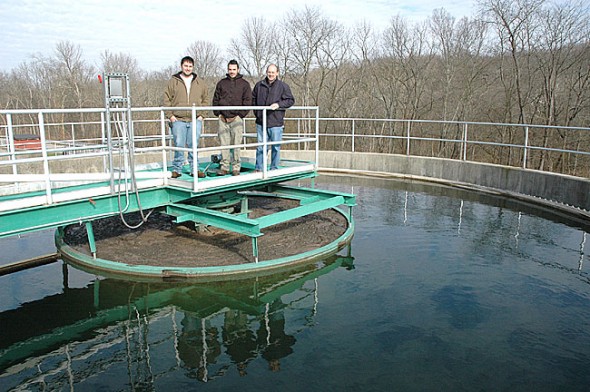 After nearly two years of work and about $3 million in upgrades, the Village’s refurbished wastewater treatment plant now has not only higher water quality but also a new name. Instead of focusing on “wastewater” coming into the plant, the new name for the Village Water Reclamation Plant emphasizes its ability to save water by treating it and returning it to healthy streams and waterways.

The first major renovation of the reclamation plant in 23 years came just in time for this year of record rainfall, according to Wastewater Treatment Supervisor Joe Bates. With a new 2.5 million gallon stormwater detention basin, the plant was able to hold the excess water that May and November skies bucketed down over the village to give the plant time to treat it before sending it on to the Yellow Springs creek and then the Little Miami River. The detention basin allows the plant to treat 100 percent of the influent, which formerly inundated the plant in heavy rains and forced the plant to release highly diluted but barely treated wastewater. The fish aren’t the only ones grateful for the new basin.

“We first used it in May, and that’s when the geese showed up — they even had a nest with eggs,” Bates said. “When it gets pumped down, they lose their pond, but the water there has been up and down this year.”

The reclamation plant got more than just a new detention basin. Most importantly, the plant is now able to treat the sewage for phosphorus, which encourages algae growth in streams and depletes the water of the oxygen it needs to maintain its natural ecosystem. The plant’s new biophosphorus removal system has lowered the level of phosphorus in the effluent (water leaving the plant) from about 4 milligrams per liter to about 1 mg/liter. The level of ammonia has dropped from an average 2.3 mg/liter to about 1.1 mg/liter, and the level of suspended solids has also dropped from an average of 30 mg/liter to about 18 mg/liter. The previous levels for all three pollutants were formerly sometimes above the standards regulated by the Ohio Environmental Protection Agency.

“The water spends a lot longer time in treatment now than it did before, and I’ve definitely seen an improvement in the quality of the water leaving the plant,” Bates said. “In my opinion, it was money well spent.”

In addition, at the site where the sewage water comes into the plant, a heated cement influent structure was built to house a new screen and grit removal system that will keep the influent pipes from freezing, as they did in the past. The upgrade replaced all of the plant’s manual switches (installed in 1988) with a new touch-screen Supervisory Control and Data Acquisition system which monitors and controls the plant’s operations from a single station that can be accessed online. A new sheltered sludge pad was also built to retain the solids in bad weather until they can be trucked away and spread on local farm fields.

The upgrade also included a new backup generator for the plant, which was formerly forced to shut down whenever a storm interrupted power to the plant. In September 2008 when the storms from Hurricane Ike extinguished power in the village for several days, the plant was inoperable for 52 hours. The Village asked residents to conserve their water use until the power could be restored and the plant could resume treatment. Otherwise, again, the plant would have been sending diluted sewage down to the open waterways.

The reclamation plant had been out of compliance with EPA since 2007, when the agency reduced the legal limit of phosphorous allowed in the effluent from wastewater plants. In 2008 the EPA fined the Village for violating its national pollutant discharge elimination system permit by exceeding effluent limits on several occasions and failing to meet deadlines for necessary plant upgrades. In 2010 the Village paid $22,000 to the EPA, of which $10,000 benefited Glen Helen, and $12,000 funded diesel fuel bussing in Ohio.

The Village was able to start the renovation project in 2009 after receiving both federal and state grants. The Village used a $750,000 federal stimulus grant and a $1.07 million Ohio Public Works Commission grant to defray costs for the Village, which used EPA loans to cover the difference. According to Village Finance Director Sharon Potter, the total cost of the plant was $3.04 million.

The plant has been in full operation since the upgrade was completed last month, and the Village was recently notified that the local plant received Ohio’s 2010 Safety Award for plants with 1–9 employees from the Ohio Water Environmental Association for outstanding employee safety in operations. And plant operator Brad Ault recently received his Class II operator’s license. Bates and Ault have also been working with local resident Richard Stockton, an intern through the Operator’s Training Committee of Ohio and and former Antioch College student, to acquire the training hours he needs to earn his EPA wastewater certification. All three plant operators welcome the public to attend an open house to see and learn about the recent plant upgrades on Thursday, Dec. 29, from 11 a.m. to 3 p.m. In the case of rain or inclement weather, the event will be held on Wednesday, Jan. 4.

One Response to “Upgrade makes sewage plant shiny and new”