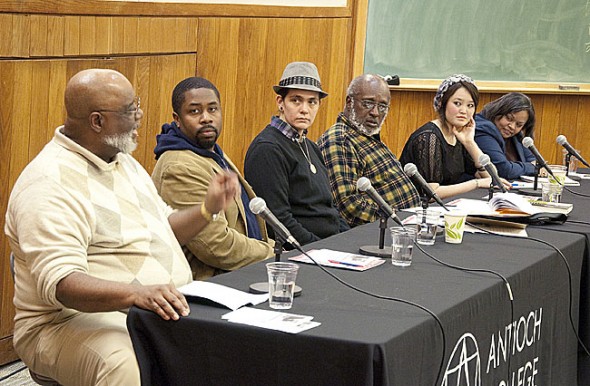 A common theme emerged during the Antioch College MLK Day panel on diversity issues at the college. The panelists, all persons of color who either had graduated from, or were currently at the college, related similar stories of the stress and isolation of being a minority student. However, they also agreed that the college taught them critical skills that they see as unique to the Antioch experience.

“It was hard. I cried a lot, screamed a lot, protested a lot,” said Shelby Chestnut, ’05, a Native American. “But I’ve never been in another place where I could do all that and still be supported, still be challenged every day. While it was hard, the things that Antioch taught me, I wouldn’t change for anything. It made me the person I am.”

The panel, moderated by former Antioch College board member Prexy Nesbitt, ’67, aimed to honor King Day by focusing on, “How has Antioch College dealt with, or not dealt with, questions of diversity and social justice?” About 100 students, staff and villagers attended the event, which took place in the college’s McGregor 113. The panel began with statements from the six panelists, including current Antioch student Nargees Jumahum, then opened to questions and comments from audience members.

The event’s final focus became how the revived college can address issues of diversity in ways that are less painful than those described by panel members.

“What’s the solution?” asked college major gifts officer Eric Miller. “We don’t want people to be asleep, but also don’t want them inflicting misery on each other. There must be a third way.”

Antioch College faces a unique challenge, according to alum Dan Shoemaker, because the college emphasizes both diversity and consensus.

“How do you pull off the neat trick of making diversity and consensus work in tandem?” he asked. “Those two values are not a natural fit.”

And it’s critical that the college address the challenge in time to benefit its current students, the opening statement of Jumahum, whose family is of Afghan heritage, made clear.

“It’s an up and down road so far,” she said of her experience at the college, describing the loss of a close friend and fellow classmate who dropped out of Antioch. “People ask questions I don’t know how to answer. I want to be here in four years, but sometimes I don’t know how long it will last.”

The experience of minority students at Antioch differed somewhat depending on when they attended the college, panelists said.

Antioch in the mid-’60s was a place of intense political activism, with African-American students working beside whites during a heady period of civil rights protest, according to Nesbitt. During his years here the students fought racism both on and off campus, sending more civil rights workers to the south than any other small college, he said.

“There was a tremendous engagement of Antioch students with society’s dragons,” he said.

However, the few minority students often felt discomfort due to white students’ ignorance, Presbitt said, stating that he felt prepared for the situation because of his family’s social activism.

“I was lucky because I came from a background that prepared me for the crazy questions that white folks can ask,” he said.

A “young black man from inner city Dayton,” Maceo Cofield graduated from Antioch a few years later, in 1971. Cofield’s experience was shaped by his being a part of an “experiment” that hadn’t taken place before or since at the college, he said. With funding from the Rockefeller Foundation, Antioch brought to campus a significant number of minority students in the New Directions program.

However, along with the college’s good intentions came considerable patronizing and ignorance, Cofield said, along with stress between white students and blacks, who had grown up in significantly different backgrounds.

Tensions between the groups were often high, he said, and that tension, along with funding cuts, led to the strike in 1973 that temporarily shut the campus down. But though the period was undeniably stressful, Cofield believes he and the other 27 minority students who graduated in his class received a top-notch education that they might not have had otherwise. Many of the Rockefeller students went on to law or graduate school, he said, and ended up having positive impacts on their communities.

“I had a great experience at Antioch,” Cofield said.

Having grown up in Yellow Springs, Robin Henry, ‘81, was a “true townie” when she came to Antioch in the late 1970s, she said. Her experience growing up in a largely integrated town had prepared her for being one of only a few blacks on campus, she said, but she witnessed other minority students who struggled with attending college in southwestern Ohio.

“They wondered, where were the others who looked like them?” she said. “They got tired of educating others about black culture.”

Being a “traditional kid from Dayton,” an Army veteran and a black, straight male made Devon Berry, ‘99, stand out from others at Antioch in multiple ways, he said.

While his experience wasn’t always comfortable, it gave him skills that have served him well in his current work as principal of Ruskin PreK–8 School in Dayton, Berry said.

“The level of conversations I had, the challenges were something I’ll never forget,” Berry said. “Most of the things I learned here were about being able to think, to get others’ perspectives. Going into teaching, I felt I was more equipped than the others.”

The only current Antioch College student on the panel, Jumahum said that she struggles with being different from her classmates. Out of the current group of 33 students, five are minorities, including three African Americans, one Latino and one Asian (herself). However, even though the group is very small, they have yet to bond together, she said.

“I can’t find anyone here the same as me or similar,” she said. And regarding the whole group of 33 students, she said, “We don’t really get along with each other as much as people think.”

After hearing these stories, several audience members focused on how Antioch can avoid making the same mistakes in the future, providing students of color with the preparation and support that these alumni lacked.

“Courageous conversations are necessary,” said Robin Henry, a member of the local 365 group that seeks to sponsor such conversations to enhance understanding between those of different cultures and races. That group has approached the college about the possibility of meeting with students, she said.

In the past, the college struggled with diversity issues in isolation, according to alumna, former faculty and current Dean of Community Life Louise Smith.

“I’m struck by the resonance of repeated cycles,” Smith said, stating that in the past, the college “would hide ourselves from town, hide our challenges.”

“I’m not interested in that,” Smith said, stating, “I look forward to partnerships with the 365 group and people in the village.”

While the 365 group discussions could help students address diversity issues, the college could also provide curricular opportunities for such talks, said Bomani Moyenda of the 365 group.

“Is there anything in the curriculum now?” he asked.

According to Vice President for Academics Hassan Rahmanian, current foundation courses provide “the opportunity to create those conversations.” However, he said, the topic is “something we’re beginning to think about more.”

Antioch College is at its best when students engage in governance and wrestle together with difficult campus issues, according to Chestnut.

“I think Antioch is a family institution,” she said. “We need to try to figure out how to solve our problems together.”

To the current student who talked of the lack of bonding between other students, Chestnut said, “You guys have to stay together. You have to figure out how to love each other.”

It’s also important that the college help its students find their resilience, according to Berry, who said he believes that “exposure, membership and resilience” are needed to meet difficult challenges.

The stakes are high, according to Cofield, because most institutions of higher learning are failing to prepare young people for the future.

“We have to create a model in this country soon to educate people, because the models we have are not working,” he said. “Antioch is a model that might work.”