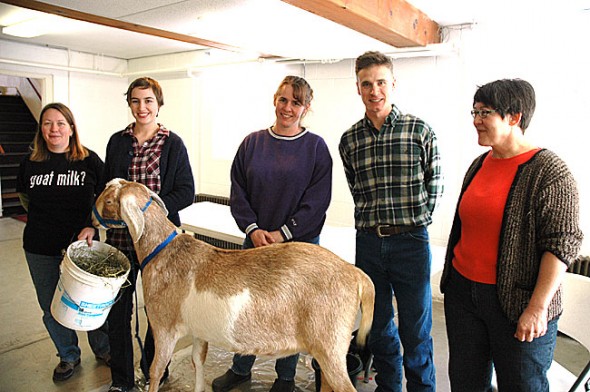 Seven-year-old Sampson is one lucky goat, according to his caretaker, Abby Dant of Xenia. Sampson was the demonstration goat at a workshop last weekend at the United Methodist Church on raising goats for milk and meat, and thus not one of the goats on the menu for the samples of goat jerky shared there.

The workshop, attended by about 32 people, was the first of six winter food and farming events organized by New Liberty Farms. They run through the end of March on Saturdays from 1 to 3 p.m. in the basement at the church, 202 South Winter Street in Yellow Springs, and are free-of-charge. The workshops are held following the winter farmers market, which is also housed in the church basement and takes place from 9 a.m. to noon on Saturdays.

“People are more interested in knowing where their food comes from,” said Beth Bridgeman, who joined New Liberty Farms in October to put on educational events. And New Liberty Farms, which raises chickens for meat and eggs from its farm on Mosier Road north of Yellow Springs, wants to help spread that knowledge.

One participant at last weekend’s workshop remarked the event was like “grown-up 4–H.” At the event, Bridgeman enrolled the help of three area goat farmers to teach the basics of goat care. More and more residents have shown an interest in raising the ruminant, which can legally be kept in village backyards, Bridgeman said.

“We’re lucky in Yellow Springs — having goats is not something that’s really available in most zoning situations,” Bridgeman said.

Bridgeman will lead the next workshop, Jan. 21, on how to prepare healthy, fast meals in a pressure cooker. Though some are scared away from pressure cooking because of the risk of explosion, the method helps foods keep their nutrients, saves energy in cooking and more rapidly cooks raw ingredients such as beans and meats.

“Sometimes healthy is not fast, so this is a fast way to have healthy food,” said Bridgeman, who will show off her new electric pressure cooker.

On Feb. 11 Bridgeman will talk about how to keep vegetables through the winter, with or without a root cellar, sharing the secret behind the hundreds of pounds of sweet potatoes, potatoes and parsnips now stored in her garage. Participants are also to bring their own root vegetable dish, which will be judged by a local foodie, to find the best local winter vegetable recipe. Beets, carrots, potatoes, turnips, rutabagas, Brussels sprouts and other winter vegetables need apply.

“I’m hoping people will come out from the woodwork to enter their root recipes,” Bridgeman said, and hopes the workshop can show how tasty root vegetables, not always hyped for their flavor, can be.

New Liberty Farm owner Kat Krehbiel will run the March 24 workshop on being prepared with stores of food, water and other essentials in case of an emergency. Bridgeman said many villagers and township residents may recall how difficult it was when “Dry Ike” blew through in 2008 and knocked out electricity across the area.

“Without electricity … very quickly you go back to living 500 years ago,” Bridgeman said. Having food stores that are rotated, keeping water on hand and having an emergency plan will be discussed.

Believe it or not, having fresh tomatoes from your garden in January is possible and at a workshop on “early eaters and late keepers” on March 10, Bridgeman will share how. Planting certain varieties of vegetables, such as the Siberian tomato introduced after the fall of the Soviet Union, is just one of the many ways that the growing season can be extended, Bridgeman said.

The series ends with a seed exchange and workshop on making bread and soup, on March 24. Bridgeman will share the no-knead bread recipe and chicken soup made from New Liberty chickens.

The workshops are purposely being held in the “dark days of winter” when growers are less busy and able to plan their growing season, Bridgeman said. As workshop participants disperse to their homes and gardens come spring, New Liberty Farms will consider other educational opportunities, but has none yet planned.

To her new post at New Liberty Farms, Bridgeman brings 12 years of experience as an educator at the Ohio State University Agricultural Extension Office in Xenia, a childhood spent canning with her mother and helping on her grandmother’s farm in Kansas and her own experience growing, preserving and cooking local food.

“I didn’t grow up on a farm, but a lot of us are just a generation away,” Bridgeman said. “I hope more and more people get back to these things.”

In addition to its new educational charge, New Liberty Farms will continue to sell chicken, eggs and pork. The products are now available exclusively at the farm, 6840 Mosier Road, Yellow Springs, on Saturdays from 9 a.m. to 4 p.m.

Participants are required to sign up for the workshops ahead of time by calling Beth Bridgeman of New Liberty Farms at 937-768-7240.