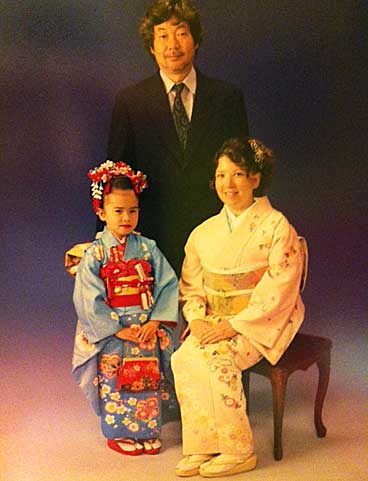 Life after shock in Japan

A native Yellow Springer (YSHS ’87, Antioch College ’91), I’ve spent much of my life living and traveling overseas, and for the past 15 years have called Japan home. I currently work as a re-writer for DHC, a Tokyo-based cosmetics company, and enjoy this rare glimpse into the uniquely mundane rituals of a Japanese office. After much jostling, the March 11, 2011 earthquake (and radioactive mess) positioned itself at the top of my ‘most terrifying experiences’ list, beating out a mugging in Fiji and sudden loss of altitude over Peru. I live in Ichikawa-shi, a suburb of Tokyo, with my husband Fumiaki and our daughter Kei.

Kei and I walked hurriedly to the nearest train station in a light radioactive rain, each of us pulling a small suitcase, our hoods securely fastened and coats zipped tight. The days following the Great East Japan Earthquake, and the ensuing tsunami and nuclear disaster, were some of the darkest of my life. Terrified by the prospect of a nuclear reactor meltdown (roughly 150 miles away), unnerved by the daily aftershocks, and fed up with the perpetual state of confusion, Fumi and I decided it would be best if I left the country with Kei for a couple of weeks. As if to say “Go then!” the Earth gave one final shudder during our ride to the airport, halting the train for 10 minutes in the middle of a rice paddy.

One of the lowest moments of our otherwise happy visit to my father’s home in Hawaii came while on the phone with Fumi, a conversation that ended under a cloud of uncertainty. “You are coming back, aren’t you?” he whispered into the phone. I honestly did not know. I was prepared to stay away longer, everything contingent on the resolution of the nuclear disaster.

Now, nearly one year and 6,700 aftershocks later, I still feel emotional when I allow myself to think of that day. Our lives in the Tokyo area have returned to normal. Yes, there are occasional aftershocks, and every few weeks an article appears in the paper on the latest food safety measures. Yet most of us have been afforded the opportunity to return home, to school, to our jobs—our lives! It is hard for me to imagine the lives of those who had nothing to return to. It is hard to imagine the lives of the hundreds of children orphaned by this disaster.

I still live with the fear of the “big one” striking; according to a recent study published by the University of Tokyo, there’s a 75 percent chance of a magnitude 7.0 or greater hitting Tokyo within the next four years. I practice my poker face at work in an attempt to mimic co-workers every time our desks and lamps are moved by the earth. I admire their nonchalance, but don’t understand it.

When the quake struck on a sunny Friday afternoon, I had been about to indulge in a rare nap. After a few seconds of shaking, I found myself running down the stairs fully expecting it to stop—as it always does—so I could reclaim my spot on the sofa. Instead, I ran further into the yard, next the street, until finally I was down on my knees crying hysterically. Official accounts clock the duration of the initial tremor at six minutes. My sister-in-law came running out of her house next door; we huddled during the violent shaking, enduring the beginning of the nightmare together. The kindergarten teachers from across the street brought their students outside to safety. While I cried uncontrollably, they remained characteristically calm. It was a moment of hilarity not lost on me even then. All I could think was (aside from the possibility of losing our home), “Here I go again, displaying my foreignness. How very rude of me!”

As we approach the one-year anniversary of the quake, my thoughts remain with the survivors.

Nicole (Wood) Irizawa grew up in Yellow Springs. She now lives in Japan with her family.