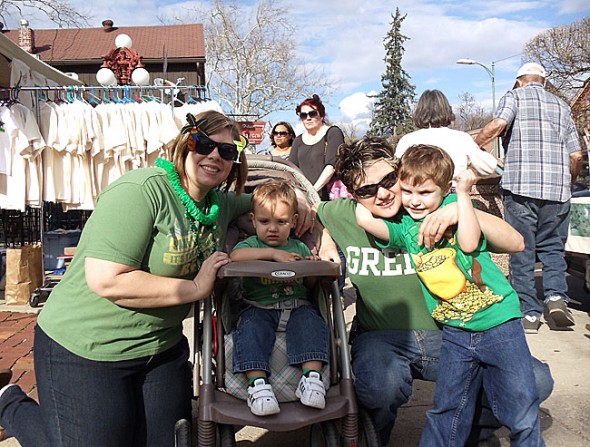 Christa Thomas, left, and Jen Foley celebrated the local St. Patrick’s Day festivities with their children, Aeridan and Oriah. The Yellow Springs Chamber of Commerce organized the “Shamrocks & Shenanigans” pub crawl, which drew swarms of visitors to the village on a sunny Saturday.

C of C efforts pay off— Village a mecca for many

A mecca for arts lovers. A thoroughfare for avid bicyclists and hikers. A place to soak up street life and people watch. And now, a town in which slightly buzzed tourists can wander from bars to restaurants to shops.

Yellow Springs is many things to many people and its latest incarnation is as a place to pub crawl. To Karen Wintrow and Holly Simpson of the local Chamber of Commerce, who are constantly brainstorming new strategies to promote the village from their office at the old Yellow Springs train station, the pub crawl idea was a “no brainer” and a way to jumpstart the spring tourist season. And during February’s “Cajun Invasion” and March’s “Shamrocks and Shenanigans,” tourists poured into town to absorb the local vibe, eat and drink, and shop. Parking spaces across town were filled. Bicycle racks filled up. Stores were packed.

In recent years the local Chamber of Commerce has stepped up its efforts to organize events and advertise the village — and it has worked, according to Wintrow, the Chamber director.

“Yellow Springs is in more people’s minds,” Wintrow said, and attracting tourists to events and restaurants is getting easier. And the local Chamber, with 326 members, is also tackling more ambitious tasks — getting visitors to open their wallets at retail shops, advising new shop owners and strengthening the Chamber’s biggest fundraiser, Street Fair.

At the Chamber’s annual meeting last week, Wintrow told members that the business climate in Yellow Springs was favorable in 2011, with steady growth and expansion for many local firms.

“It’s been a relatively good year,” Wintrow said. “People are sustaining, there have been few closures, and when one business closes, another moves in immediately.”

Chamber board president Dan Young echoed Wintrow, saying that awareness of the Yellow Springs brand is reaching far and wide. And he said that the Chamber, which is the 14th largest Chamber of Commerce in the Dayton area, according to a recent article in the Dayton Business Journal, is extremely productive.

“The Chamber is privileged to have Yellow Springs to promote,” he said. “There is no Chamber our size that gets as much done. Yellow Springs has a lot to do with making that happen.”

The Chamber, with two full-time employees, broke even last year with a budget of around $150,000 and added 56 members to its rolls.

Young joked that patrons at his Young’s Jersey Dairy, which gets one million visitors each year, often ask him where they can see the hippies of nearby Yellow Springs. While there was, for a time, an interest in  rejecting Yellow Springs’ hippie image, the Chamber has instead decided to run with it.

“We are embracing it, not fighting it,” said Simpson, the marketing and events coordinator at the Chamber. “We can be that hippie haven for people,” she said, adding that Yellow Springs is also many other things — a place for art, eating, shopping, recreation and more.
Most of all, the Chamber emphasizes that Yellow Springs is “alternative,” and it’s paying off, Simpson said. To Wintrow, it is the town’s authenticity that makes it so attractive.

“Things happen organically here,” Wintrow said. In contrast with the Greene Town Center in Beavercreek, where music performers have been hired, in Yellow Springs buskers and street performers come out on their own, and as a result, “it doesn’t look fake,” she said.
“It’s something that [visitors] have never seen before,” Wintrow said of the village’s vibrant street life.

But drawing visitors to town can have broader implications for the local economy. Many visitors later become local residents and business owners, according to Sheila Dunphy of Dunphy Real Estate.
“I meet people who want to move here all the time,” Dunphy said. Many start as tourists and later move here for the local “quality of life,” she said. Local businesses such as Artistic Silver, on Dayton Street, and the former Tie Dyed Gift Shop both started as Street Fair vendors, Wintrow added.

The biggest draw to town is the semi-annual Street Fair, which last year brought in around $96,000 in income to the Chamber. Those funds were used to market the community throughout the year and keep Chamber membership rates low, according to Wintrow. To keep Street Fair growing, Wintrow said the Chamber has been weeding out the more manufactured products in favor of a “cool mix” of vendors.

Though many villagers have a “love/hate” relationship with Street Fair, the day of the event is often the highest grossing day for local businesses, Wintrow said. Locals sometimes complain about tourist traffic, but that market is critical for many downtown businesses. Wintrow said that she hopes local businesses understand that the village’s small population, many of whom work outside the village, cannot alone support many of its businesses.

“The gift shops and art galleries are just not going to be sustained by our citizens,” Wintrow said.

A positive trend is that more independently-organized events are attracting crowds. Last year the weekend of Artist Studio Tour in October was nearly as profitable as Street Fair for many businesses, Wintrow reported. Other independent events, such as the craft-focused Cyclops Festival and the performance art-based Cirque Carnival, were extremely popular.

“That’s exactly what we want,” Wintrow said of the trend of more events organized by outside groups. “We want to feel like we’re partners. We’re encouraging it and we’re working with them.”
The next big events are the Yellow Springs Experience eARTh day weekend, April 20 to 22, and Hippie Heritage Days, on May 19.

Whereas getting tourists to attend events and patronize restaurants and bars is easy, encouraging them to open their wallets at retail shops is proving more challenging, Wintrow said. Local businesses have suggested that some promoted days and weekends are too “event heavy” and as a result, tourists don’t shop, she said. Keeping that in mind, the Chamber has been more focused on promoting shopping in recent marketing efforts.

The Chamber, often the first call or stop for people wanting to open a business in town, also advises start-up businesses, helping them to find a location, pointing them towards business guidance and offering advice on how they can be successful in the local market. For its members, the Chamber provides access to employee benefits, gives discounts on goods and services, offers group health care insurance and organizes educational and networking events.
With an eye to a diverse downtown business base, Wintrow would like to see an ethnic restaurant, more clothing stores, a full-service spa facility and more professional businesses in downtown offices. And lodging is still needed, she said. While about 50 visitors stay overnight at local motel and guest houses, large groups and conventions cannot be accommodated here.

Owing to the unseasonably warm weather and a slew of events that have already brought out visitors in droves this year, Wintrow anticipates a strong business season in 2012.