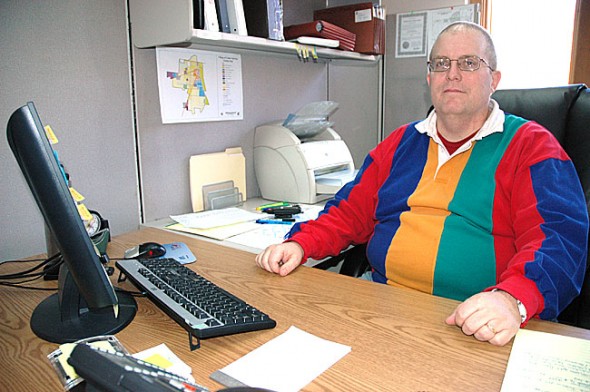 Cundiff off to new job in Sidney

When Mark Cundiff visits Sidney, Ohio, where he worked for nine years as a planner and assistant manager, he’s gratified to see such visible changes as a bike path extension that he helped plan, and rehabilitated homes made possible by a program he helped to implement.

This sort of physical evidence of community improvement is why Cundiff has spent his working life as a city administrator.

“What appealed to me about this work is that you’re making a difference in the community,” he said. “You like to think you didn’t make it worse and might have made it better.”

Cundiff reflected on the effect on Yellow Springs of his three-year tenure as Village manager Friday, Feb. 17, his last day on the job. (Cundiff did work again at Tuesday’s Village Council meeting.)

Regarding physical changes to the village, Cundiff is proud of the upgrades to the skate park, and the clearing of brush along the bike path. He’s also pleased at the almost-completed rehabbing of the wastewater treatment plant, which had for many years been out of compliance with EPA regulations. While others played a major role in that project, he did secure a federal stimulus grant that helped foot the bill.

Less physically tangible accomplishments include the passage of the Village property tax levy (for which Cundiff gives major credit to the levy citizens’ committee), and his work creating a five-year capital improvements plan, which previously the Village lacked. The plan allows Village Council to “put planning back in the process,” he said, and to look ahead at Village government needs so Council can put money aside for those needs, rather than be blindsided by unexpected expenditures.

Perhaps most of all, Cundiff said he’s proud to have been able to continue to provide the level of services that villagers want even in these difficult economic times.

“That’s a major challenge in any community these days, with costs going up and, because of cuts from the state, resources going down,” he said.

“Broadly speaking, it’s a job well done,” she said this week. “Mark has gotten a lot accomplished with good humor. I think we owe him a lot.”

Even in his last weeks in the village, Cundiff gave a well-organized and thorough orientation to new Interim Manager Laura Curliss, Hempfling said, giving her a solid foundation for her new job.

“He gave us a ton of work even as he was going out the door,” Hempfling said.

To Council member Rick Walkey, Cundiff accomplished a significant amount for the Village because, “He could keep more balls in the air than anyone I know. He was on top of everything, and extremely competent.”

And Walkey will miss the humor Cundiff brought to the job.

“Mark is a funny, complicated character with tremendous talents as manager,” Walkey said. “We’re lucky we got him for the three years we did.”

In past interviews, Cundiff emphasized that dissatisfaction with the Yellow Springs job was not his reason for leaving, and he especially appreciated having a supportive Village Council. Rather, the Sidney position was his “dream job,” he said, since his family considers that city its home and maintains longterm friendships there.

But the Yellow Springs job does come with challenges, Cundiff said. First and foremost, he said, is the intense involvement of citizens in the democratic process. While that level of citizen involvement is a good thing, it’s unusual and something new managers may need to adapt to. And, that involvement means that the legislative process can take longer here than in other municipalities.

A manager here also needs to re-think his or her style if he or she’s a top-down manager, according to Cundiff, who believes a collaborative approach works best in the village.

“A lot of managers think they know the best way of doing things, and those people need to take a step back and realize that others may have expertise,” he said. “They need to be open to hearing citizens’ ideas.”

Cundiff said he did his best to be open, and especially to be accessible to anyone who wanted his attention.

“In the end, it’s about relationships,” he said. “There are simple things, like returning phone calls. Even if you know it will be a difficult one, you make that call. You’re a public servant.”

Cundiff and his wife, Peggy, who worked for Yellow Springs Chiropractic, live on Livermore Street and plan to put their home on the market soon. There are many things about the community they’ll miss, he said, including their Saturday morning strolls down Livermore Street to town, where they had breakfast at the Sunrise or Emporium, then shopped at the Farmer’s Market. And they’ll miss hiking in the Glen.

“There’s nothing like it,” he said of Glen Helen.

Before coming to Yellow Springs, Cundiff was planning director of Troy, Ohio, and before that city manager of Greenville, Ill. He served a variety of positions, including planner and assistant manager, in Sidney and previously worked as a planner for Woolpert Associates. He received a masters in community development and planning from Wright State University.

Cundiff always wanted to go to Notre Dame, but he didn’t get in. For that reason, he thinks that Curliss, who went to Notre Dame both as an undergraduate and for law school, and to Yale for a masters in divinity, is smarter than he is.

“You’re trading up,” he said of the new interim manager.

Before coming to Yellow Springs, Curliss for six years worked as assistant to the mayor in Wilmington, Ohio, where she lives with her husband and son.