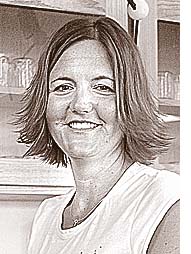 During a special meeting on Thursday, Feb. 16, the Yellow Springs school board accepted the resignation of Yellow Springs High School chemistry teacher Michelle Edwards. The board also approved a resignation settlement agreement between Edwards and the school board and school administrators. Both votes were unanimous, with board President Sean Creighton and board members Angela Wright, Aïda Merhemic and Sylvia Ellison voting yes; vice-president Benji Maruyama is on extended leave from the board.

The board met in executive session with Vickie Hitchcock, president of the Yellow Springs Education Association teachers union, and the union attorney for an hour and a half before voting on the measures. According to the settlement agreement, Edwards will resign at the end of the current school year and until then “will work at home at the direction of [YSHS] Principal [Tim] Krier and may be assigned limited tasks, such as preparing lesson plans, related to her classes.” Edwards will continue to receive her full salary and benefits through August 2012.

Both Hitchcock and the YSEA attorney declined to comment on the matter.

Edwards said this week that she made her decision to resign in the best interest of her family, including two of her children who attend YSHS. In her 21 years of teaching, she said, she was never formally disciplined until the most recent incidents. And she very much enjoyed the seven years she spent teaching high school chemistry, advanced placement chemistry and general science classes in Yellow Springs.

“I loved it at Yellow Springs — I loved those kids,” she said. “I loved working there, it was a lovely place.”

Two weeks ago Edwards was placed on paid administrative leave for “unprofessional” conduct regarding an ongoing issue of inappropriate communication with students, including late-night textmessaging. Edwards had been placed on paid and unpaid suspension twice before over the past two years, regarding what the district deemed as unprofessional conduct both with students and another teacher at the school. Prior to 2010, Edwards had received positive evaluations from the district, which voted to grant her tenure in 2008, three years after she began teaching in Yellow Springs. Edwards was also widely loved and appreciated by the dozens of students who staged a walk-out of school two weeks ago in protest of the administration’s decision to place her on administrative leave.

District Superintendent Mario Basora declined to comment about the settlement, as did several teachers who were concerned about both the sensitivity of the issue and their own jobs.

According to the settlement, all allegations pending against Edwards “are unproven” and therefore barred from being reported to the Ohio Department of Education’s office of professional conduct. The agreement also provides that documents related to the allegations are to be removed from Edwards’ personnel file. The agreement further releases the school district of any claims made by Edwards regarding her employment.

Since Edwards’ leave, substitute teacher Rebecca Fitch has been teaching and will continue to teach Edwards’ five science courses for the remainder of the school year. Fitch graduated cum laude from Lewis & Clark College with strong knowledge of chemistry, although she is not certified to teach chemistry, and has extensive experience working with kids, which “puts her in a unique position to perform well in a situation where she takes over class in the middle of the school year,” Basora said. She met with the parents of her students last week and will continue to stay in touch with families about the curriculum for the remainder of the year.

The school has not yet made a commitment to replacing Edwards’ position with another full-time teacher, Basora said this week. Edwards was compensated at an annual rate of $73,423 at the time of her resignation.

“We’re deficit spending at alarming levels, revenues have declined significantly since 2008 and have yet to rebound, and our cash carry-over has gone from $3.75 million to $1.75 million within three years,” he said. “We want to do what’s best for the district as a whole — we hope to make a decision in the next month or two.”

As the district recovers from its most recent loss, Basora is keeping his eye on the positive work of other staff and faculty who are working to make the local district a strong one.

“We care about our teachers tremendously — we have a lot of highly professional teachers who are able to build strong relationships with kids,” he said. “The overwhelming majority of our teachers do an excellent job of teaching every single day in the classroom.”