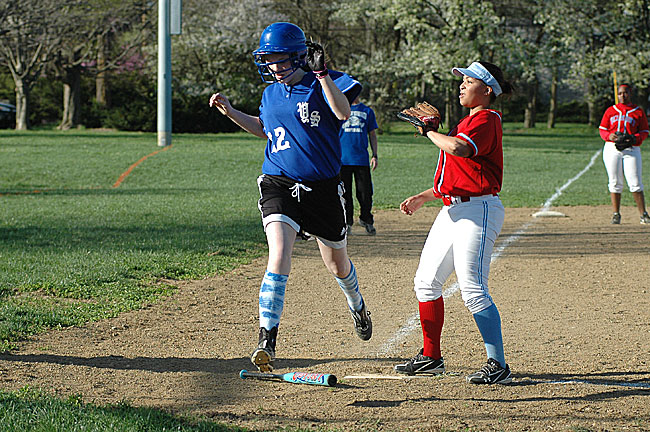 Alex Bass stole home on a wild pitch to register a YSHS run during the team's home opener. The Lady Bulldogs were down 19–16 when the game was suspended due to darkness. (Photo by Megan Bachman)

It has been years since the Yellow Springs High School varsity softball team has stepped onto the diamond at Gaunt Park. That’s why last week’s home opener against Belmont, which was suspended in the fourth inning, was nevertheless significant as the start of what will hopefully be girls softball’s first full season since 2008.

The young Bulldogs team came out swinging. They took leads of 4–2 after one inning and 9–8 after two innings but the game was eventually suspended due to darkness with Belmont leading by a score of 19–16. Coach Jim DeLong was happy with the game’s result.

“I was real pleased with the execution and effort of our team against a bigger, older, more experienced team from Belmont,” Coach Jim DeLong said. “The hustle and desire and enthusiasm from our team was outstanding.” 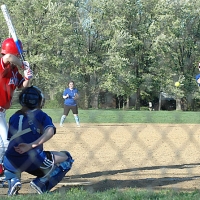 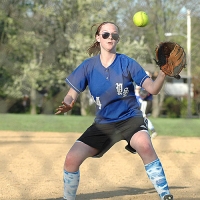 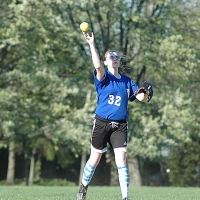 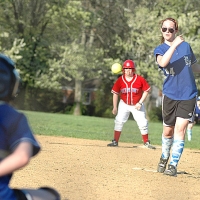 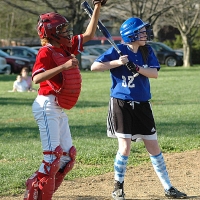 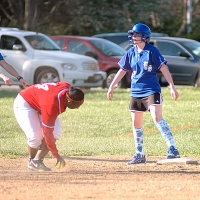 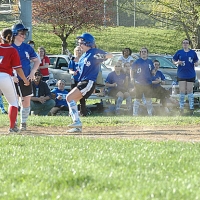 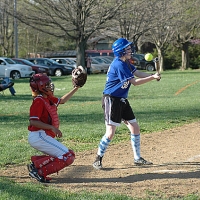 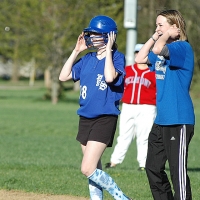 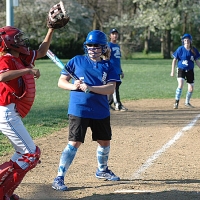 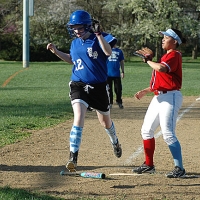 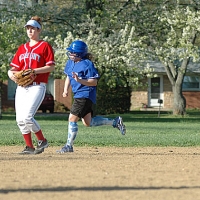 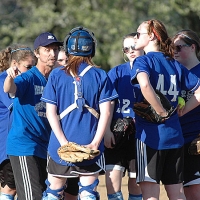 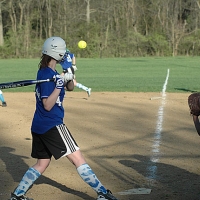 In 2009 the softball season was canceled after the team’s first game. In 2010, two girls joined the boys team to play. And in 2011, the season was canceled again due to lack of interest. This year’s roster features 13 players, including seven freshmen and one sophomore in its nine-person starting lineup.

Freshman Catcher Chelsea Horton, who went 3–3 with three runs scored, sparked a four-run outburst in the first inning with a leadoff single and later came around to score a run on an RBI by Katie Triplett. In the second inning, Horton sparked a five-run rally with a leadoff double.

“Horton is a player who elevates her game a notch once the game starts,” Coach DeLong said. “In the past week, I’ve named her team captain, she’s played catcher for the first time ever, and she is batting leadoff. She’s done well on all three counts.”

After falling behind by a score of 12–9 in the top of the third, the Bulldogs rallied for three runs in the bottom of the inning to tie the game at 12–12. Cali Dillon and Leanne Holmes got on base to lead off the inning, followed by base hits by Triplett and Jesi Worsham. Then sophomore Olivia Ramage provided the key hit of the inning with a two-out, two-RBI single to the outfield. Coach DeLong said it was a “clutch hit.”

“The ball jumped off her bat with a lot of velocity,” Coach DeLong said.

Senior Leanne Holmes pitched the entire game for the Bulldogs. Coach DeLong was impressed with her performance.

“Holmes’ pitching location and release point and mechanics have really come around,” Coach DeLong said. “She’s a first-year pitcher and she’s really battling out there for the team. It takes a special mindset to be a pitcher and Leanne has that needed mental framework.”

Horton led the team offensively, going 3–3 at the plate with a double and three runs. Ramage went 2–2 with two RBI’s and Holmes and Worsham scored four runs apiece.

The game will be resumed at a later date if both schools have an open date available.