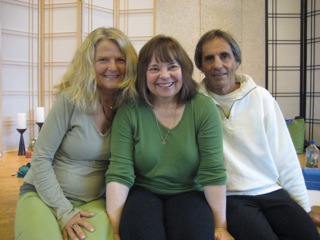 About a hundred yoga practitioners from near and far — as far as Indonesia — are coming to Yellow Springs this weekend for a five-day workshop with well-known yoga teacher Judith Lasater of California.

Described as “one of the nation’s finest yoga teachers,” Lasater is the president of the California Yoga Teachers Association and a practitioner of Iyengar yoga since the early 1970s. She was also one of the first teachers to introduce restorative yoga.

Lasater has been coming to the village since 1986, brought by local yoga teachers Patricia Schneider and Andrew Junker, who have been operating Yellow Springs Yoga (see http://www.yellowspringsyoga.com) since 1985. The couple teaches local classes at the Bryan Center during the six months, from May through October) that they live in Yellow Springs, and teach and hold workshops in the Virgin Islands through the winters.

Yellow Springs Yoga has brought, besides Lasater, other nationally and internationally known teachers to Yellow Springs, according to Schneider in an interview last week. For many years Angela Farmer and Victor Van Kooten, who live in Greece, have journeyed to Yellow Springs to give workshops, and in September Erich Schiffman will hold a workshop. And this fall yoga icon Lilias Folan will teach in the village.

“We are definitely a bright and shiny star on the yoga map,” Schneider said.

For a longer story, see the April 26 Yellow Springs News.