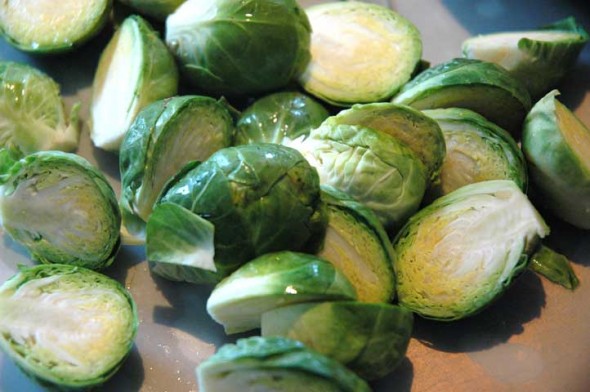 Brussels sprouts have a mild bitterness that is easily tamed with a little olive oil, salt and a grill.

BLOG — The bitter truth about taste

It is my notion, from a combination of collective wisdom and personal experience, that bitterness in food is good for you. A century ago folks used Dr. Copp’s White Mountain bitters to cure everything that ails the body, including the common cold, fever, diarrhea, constipation, and some things I’ve never heard of such as ague and biliousness. The National Bitter Melon Council says bitter melon has traditionally been used to cure viruses, bacteria, and some cancer cells, and to reduce inflammation and purify the blood. And according to Livestrong.com, bitter leaf is a strong antioxidant that is thought to lower cholesterol, fight breast cancer and reduce the risk for cardiovascular disease.

Evolving as we have, I assume the first time the word bitter was uttered, it was a reference to the acrid taste of a medicinal herb someone had the temerity to sample. The reference to the emotion by the same name, meaning loss with attachment, most likely came later. Both words are often used to indicate a negative experience, however while I can agree that loss with attachment is dystopic, the taste of sesame seeds, collard greens, chocolate and grapefruit is in no way similar. Bitter food has gotten a bad wrap, and it’s getting salty about it.

Speaking of salt, which has also been commandeered to describe an emotion not far from bitter, salt is the antidote to bitter. In 2009 the New York Times Tierney Lab published a little study that showed the bitterness of a quinine solution decreased in proportion to the amount of salt that was added to it. I’ve found the rule to be true when making tahini sauce, which uses not only sesame butter but also lemon, whose rind has quite a bitter grip. But add enough salt (and a little raw garlic!), tasting as you go, and the combination reaches a “sweet” spot, at which point you want to put it on everything. Salt makes bitter behave better. This is fantastic news because not only is salt tasty, we can all now eat all the bitter foods that our forebears have known for centuries are essential for healthy digestion.

Bitter has long been appreciated in the Ayurvedic tradition as one of the six essential tastes, along with sweet, sour, pungent, salty and astringent. The West has developed a similar taste chart, including sweet, sour, bitter, salty and umami (savory for lack of a better word). And drink bitter every day. Coffee, tea, beer and wine are probably the most highly consumed liquids in our diet. The bitter adds complexity of flavor that we crave, and I think our bodies intuit their need for that taste. So if you made the leap from drinks to food, you’d be having Brussels sprouts and marmelade for dinner every night. Olive oil, which has gained wide popularity for both health and taste, is also an everyday essential that will gain you bitter points.

Well maybe you don’t want it every meal, but choose bitter more often and gain both health and joy while doing it.