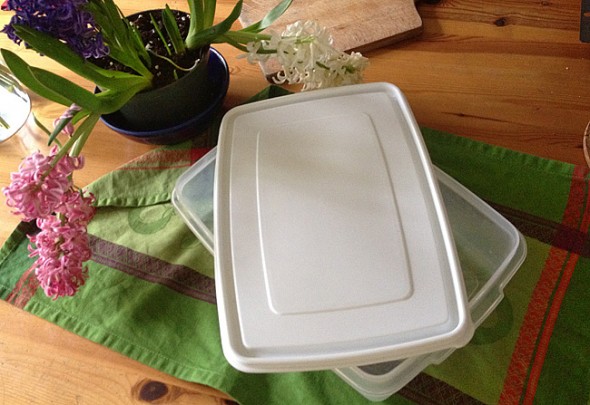 Villager Sahara Nosefeather and her favorite piece of Tupperware were recently reunited after the plastic box went missing 25 years ago at a local potluck.

Villager Sahara Nosefeather and her long lost favorite piece of Tupperware were re-united recently at a potluck, 25 years after the rectangular plastic box had gone missing.

The Tupperware piece was special to Nosefeather because an old friend gave it to her when Nosefeather first moved to town, a struggling single mom with no job and two children, Lilac and Yurt. The friend presented Nosefeather with the Tupperware and a piece of sage advice: “Your family won’t starve here. There’s always a potluck.”

The friend also advised that the Baptist and Presbyterian potlucks were the most tasty, the Unitarians the one with the most “diverse” dishes, and to attend Quaker potlucks only if the family was really, really hungry.

The friend’s advice served her well, according to Nosefeather.

“No one ever turned us away,” she said. “Even after the time that Yurt downed a whole platter of deviled eggs at the Baptists, and at the Quakers when he flushed broccoli down the john.”

The kids are grown now, with Lilac a high profile saleswoman of Mary Kay cosmetics and Yurt an aeronautical engineer, Nosefeather said.

The Tupperware went missing in 1987, which was an excellent year for potlucks, what with the rise in environmental groups and a burst of pagan activity, she said. And while she eventually replaced the white plastic box, she never stopped longing for the original, and each day visualized it sitting once again in its place in her cupboard.  While it took 25 years to manifest into reality, Nosefeather is sure that her visualizing efforts led to her plastic box’s safe return.

“Now that my Tupperware’s back,” she said, “I’m going to try for world peace.”