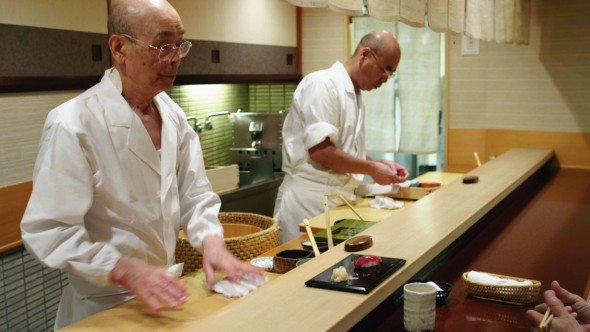 Jiro Ono is known as the world’s greatest sushi chef. He is the first to have received three Michelin stars. Japan has proclaimed him a national treasure. But Ono lives for one thing only: to make better sushi. That’s all his 10-seat sushi bar underground at Tokyo’s Ginza subway station serves. And he intends to be there until he can no longer stand to make the art he has lifted to a new high.

“Shokunin” is the Japanese word that is used again and again in David Gelb’s 2011 film “Jiro Dreams of Sushi.” The word refers to a craftsman who devotes himself with honor and respect to his work, be it composing a symphony or cleaning the concert hall. According to Japanese master woodworker Toshio Odate, a shokunin not only masters the techniques of his craft, but has “a social obligation to work his/her best for the general welfare of the people. This obligation is both spiritual and material, in that no matter what it is, the shokunin’s responsibility is to fulfill the requirement.” For 75 years Ono has been fulfilling his obligation to the craft of sushi making. And oh, the sushi!

Captured up close, under the spell of the unlikely hero’s mystique, Gelb’s film frames sushi like few have ever seen it. Raw fish can be seen as a slimy proposition, but here it is shot to look like the jewels of a pharaoh. Lean tuna glistens ruby red and promises an otherworldly experience. The octopus is so tender its softened posture follows the oval curves of the rice on which it rests. The eel looks juicy enough to melt into the plate, and the egg custard appears light enough to float off of it. Even viewers who’ve already eaten before they came will be at risk of heading straight from the theater to gorge on a second dinner.

While Jiro Ono is the man who started the quest for better sushi, the film also tells the story of Ono’s relationship with his two sons, which is complicated by the cultural tradition that the eldest will take up his father’s post once he is gone. While the younger son is encouraged to start his own sushi restaurant, Yoshikazu stays back playing second fiddle to his father, who shows little sign of relinquishing control of the business. Long shots in which Yoshikazu is seen hand toasting sheets of nori over a brazier in the white hall of the subway engender pity for a son who may never live up to the impossible expectations set for him.

And if viewers feel sorry for the son, it won’t be long before they realize that the women who married and supported these great chefs don’t get any play at all. Do they exist, or are they simply of no consequence? Gelb stays too close to the sushi to answer.

But he makes sure to include the fishmongers, incidentally also 100 percent male dominated, who insure the quality Ono insists on for the restaurant. The fish markets and fish auctions are interesting to watch, with the caller’s cadence mimicking a taiko drummer swirling madly around hundreds of blubbery blue tuna.

Jiro Dreams of Sushi is a beautiful study of a man in the element of his craft. While it occasionally dips into deeper waters by exposing bits of family history and the dynamics of the family business, it doesn’t stray far from the craft of sushi making and Ono’s single minded mission to keep raising the bar.

The film is best when seen before dinner so the viewer can gain respect for the food, and then put it into practice by enjoying some of what they saw at one of Dayton’s sushi bars, such as Akashi or I-zu. 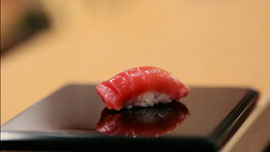