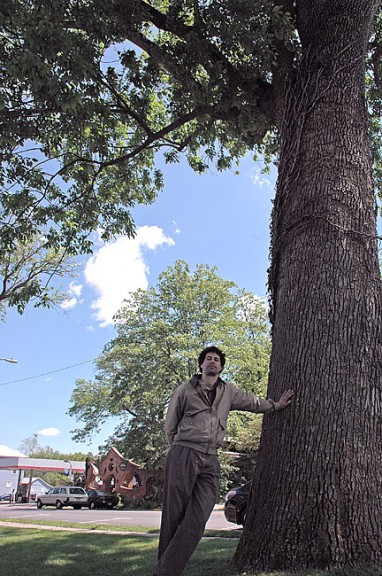 Nick Boutis, director of Glen Helen, last week identified some of the ash trees downtown, including this large ash outside the Jackson Lytle and Lewis Funeral Home on Xenia Avenue. The trees are at risk from the Emerald Ash Borer, and experts believe that if the insects ­ — which have killed millions of trees in Michigan and Ohio — aren’t already in the village, they will be soon. (Photo by Diane Chiddister)

The huge shade tree in front of the First Presbyterian Church. The two majestic trees lining Xenia Avenue adjacent to the funeral home. One of downtown’s tallest trees, its silhouette swaying over the Oten Gallery. Several stately old trees in the Barr property.

“If it’s not an immediate threat in Yellow Springs, it will be soon. It’s inevitable,” Ohio State Extension Agent Joe Boggs said last week. “The Emerald Ash Borer is knocking at your door.”

Only in recent weeks, as the tree canopy has emerged this spring, has it become evident that the ash tree crisis — the insects will kill every untreated North American ash tree in their path, no exceptions — has become local, according to Wright State biologist Don Cipollini, who lives in the village. Ash trees on the Wright State campus, in Oakwood, Kettering, Beavercreek and in Clifton Gorge all for the first time this spring show signs of Emerald Ash Borer, or EAB, damage, Cipollini said, and it simply makes sense that Yellow Springs trees are now in the ash borers’ destructive path (and left untreated, will die within three to five years). And according to Village Electric Supervisor Kelley Fox last week, he recently began hearing from contracted tree-trimming crews that they’re encountering damaged ash trees in the village.

“It’s pretty amazing,” Cipollini said this week. “We’ll see how many ashes we have, and what a single insect can do.”

According to the OSU Emerald Ash Borer fact sheet (www.ashalert.osu.edu), “EAB has the potential to virtually eliminate ash from North American forests, with dramatic effects on ecosystem processes as well as plant and animal communities.”

The most important thing a community can do, according to Glen Helen Director Nick Boutis, is have a plan to deal with the crisis.

“If there’s any good news about this,” Boutis said last week, it’s that a community, while it needs to act quickly, can at least be proactive in how it decides to address the potential loss of significant trees.

Time is of the essence, however, because the window of opportunity for treating the trees this year will end soon, according to Boggs, who said he’s hoping to come to Yellow Springs for a Glen Helen-sponsored forum on the topic early in June.

Communities have three options, according to Boggs. The first option is to do nothing, “let nature take its course,” a strategy that leaves the trees to die within a few years after infestation. However, that option can be dangerous to the public if trees are in public thoroughfares, where they could cause harm if they drop branches or limbs. Ash trees are notoriously brittle, Boggs said, and are considered to be dangerously unstable when dead.

“Ashes become a liability when they die,” Cipollini said.

The second option is to cut the trees down, perhaps replacing them with a different kind, which will, in 30 to 40 years, once again provide shade. It makes sense to plant the replacement trees as soon as possible, Boutis said, so that the ecological benefits of shade trees become available sooner.

And the third option is to treat the trees with one of the several varieties of insecticides, Boggs said. According to Cipollini, a product called Tree-age, with the active ingredient emamectin benzoate, has been frequently used in the area, although professional arborists need to be hired to inject the product into the tree.

All of these options are expensive. Cutting down a mature ash can cost at least $1,000, and treating the trees with insecticide will cost $200-500 per tree, with the product needing to be reapplied every one to two years, according to Clark County OSU Extension Agent Pam Bennett. However, she said, the insecticides have been shown to be effective in stopping the insects.

“It can be costly for a city that has a lot of trees,” Bennett said.

Many Ohio communities are choosing a mixture of culling their ash trees and treating them, according to Cipollini. For instance in Dayton, the Metroparks system has chosen to treat about 500 ash trees, and are gradually culling the rest. And Springfield is cutting down all less-healthy ash trees even if they are not yet showing signs of EAB destruction, according to Bennett, and choosing to treat some “priority trees.”

“I’m a fan of protecting a certain number to see if we can get through this wave of ash borers. We don’t know what’s next,” said Cipollini, whose research, in collaboration with Ohio State, University of Michigan and the U.S. Forestry Service, focuses on finding ways to help ash trees become resistant to the insect. The scientists are studying Chinese and other Asian ash trees that appear to be immune to the insects, or at least less vulnerable to their destruction.

Native to Asia, the Emerald Ash Borer was unknown in this country until 2002, when it was discovered killing trees in southeast Michigan and Windsor, Ontario. According to the Web site ashalert.osu.edu, the pest was probably imported into Michigan via infested ash crating or pallets at least 18–20 years ago. It was first discovered in Ohio in 2003, and has killed millions of Ohio ash trees since then.

About 1 in 10 trees in Ohio is an ash, according to the ashalert site. According to Cipollini, the trees were especially popular in the 1970s because they were inexpensive and fast-growing, so that many were planted in residential lots in those years, and are now about 40 years old. In Yellow Springs, ash trees are especially prevalant on the Antioch School grounds, and are also abundant at Antioch College, Boutis said. According to a recent tree survey, about 5 percent of village street trees are ash, according to longtime tree committee member Lloyd Kennedy, although they have a significant presence downtown.

Property owners face the same choices as do communities regarding how to deal with the impending ash borer crisis. According to Tree Committee member Macy Reynolds, the first step is for homeowners to know their trees. Ashes can be identified by their lacy bark with diamond-shaped patterns, or by their leaves, composed of featherlike compound leaves with at least seven leaflets. Once an ash tree has been identified, the homeowner must decide whether to cut down the tree or treat it. If the choice is to treat it, a certified arborist should be called in, according to Boggs, who said the arborist should have an ISA, or International Society of Arborists certification, to determine whether the tree can be treated or if it is already too infested with the insect.

There are several indications that the insects are already infesting the tree. The most obvious is a sparse tree canopy with dead branches, since the insects start eating at the top and work their way down. A second sign is the appearance of “epicormic sprouting” on the trees’ lower limbs, where shoots of new growth appear. The sprouting is the tree’s “last-ditch effort to grow” while being threatened from the top, Cipollini said. And small D-shaped exit holes on the trunk are foolproof evidence that the insects have attacked the tree, he said, though the holes may not be evident until a year after infestation.

Those who have ash trees need to think quickly about their options, according to Boggs.

“The first thing to know is that it’s inevitable” that the insects will attack local trees, Boggs said. “People need to be looking at their ash trees, and say, what are we going to do?”

It’s still possible to act this spring if a homeowner chooses to treat his ash trees, but the window of opportunity will close soon, he said.

Some who are studying the situation, such as Boutis, believe there are links between the insecticides used to treat ash and honeybee colony collapse disorder, or CCD, and they discourage the use of insecticides. But because ash trees are pollinated by wind rather than nectar and the insecticides are targeted for beetles, bee colonies should not be affected, according to Cipollini.